Brittanica.com defines an “endogamous marriage” as the custom enjoining one to marry within one’s own group, while Wikipedia says “endogamy” is the practice of marrying within a specific ethnic group, class, or social group, rejecting others on such a basis as being unsuitable for marriage or for other close personal relationships.The penalties for transgressing endogamous restrictions have varied greatly among cultures and have ranged from death to mild disapproval. Endogamous marriages are designed to keep a blood line pure or to create a dynasty by consolidating a family/house/community. British royalty have known this practice from its beginning, and many other examples exist in history. 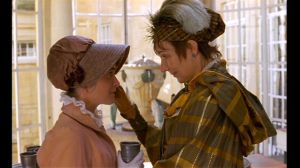 In Austen’s work, we can think of several such marriages. Lady Catherine De Bourgh wished Darcy to marry her daughter Anne, consolidating the family ties and blood lines. Edmund Bertram marries his cousin Fanny. Charles Musgrove proposes to Anne Elliot, but when Lady Russell dissuades Anne in hopes of a better connection, Musgrove marries Mary Elliot, keeping the connections between the most important families of the community intact.

An exogamous marriage, on the other hand is a union of opposites. This might be political, social, or temperamental foes. The purpose of an exogamous marriage is to inject new blood into one of the Nation’s most revered and ruling families. The New Zealand Slavanic Journal says, exogamy is marriage outside a social group. “In social studies, exogamy is viewed as a combination of two related aspects: biological and cultural. Biological exogamy is marriage of non blood-related beings, regulated by forms of incest law. A form of exogamy is dual exogamy, in which two groups engage in continual wife exchange.” Cultural exogamy is the marrying outside of a specific cultural group. (New Zealand Slavonic Journal, Victoria University of Wellington, 2002, Volumes 35-36, p.81) 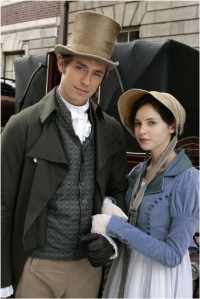 The most obvious examples of exogamous marriages in Austen is Darcy and Elizabeth in Pride and Prejudice, Captain Frederick Wentworth and Anne Elliot in Persuasion,  and Henry Tilney and Catherine Moreland in Northanger Abbey.

The weddings in Austen’s works are always financially and socially advantageous for the heroine. We, generally, assume this phenomenon occurs because Austen recognized the sting of inequalities in marriage during the Regency. Gentlemen chose women based on their abilities to deliver an heir. Not for love. Not for her intelligence. Unless the woman possessed the qualities of an “accomplished” lady 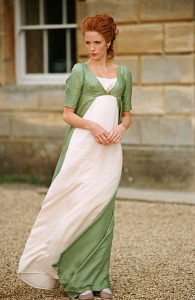 [[Miss Bingley:] “Oh! certainly,” cried his faithful assistant, “no [woman] can be really esteemed accomplished who does not greatly surpass what is usually met with.  A woman must have a thorough knowledge of music, singing, drawing, dancing, and the modern languages, to deserve the word; and besides all this, she must possess a certain something in her air and manner of walking, the tone of her voice, her address and expressions, or the word will be but half-deserved.”], she was not considered good marriage material.

We also learn from these marriages that some of those who marry for economic advantage are considered “weak minded” or “selling out.” For example, Charlotte Lucas’s acceptance of Mr. Collins is looked upon by Austen, the character Elizabeth Bennet, and Austen’s readers as an abomination.

“Ay, there she comes, looking as unconcerned as may be, and caring no more for us than if were at York, provided she can have her own way. But I tell you what, Miss Lizzy, if you take it into your head to go on refusing every offer of marriage in this way, you will never get a husband at all; and I am sure I do not know who is to maintain you when your father is dead. I shall not be able to keep you — and so I warn you. I have done with you from this very day.”

Later, when Elizabeth learns of Charlotte’s engagement to Mr. Collins, Elizabeth is astonished.

The possibility of Mr. Collins’ fancying herself in love with her friend had once occurred to Elizabeth within the last day or two; but that Charlotte could encourage him seemed almost as far from possibility as that she could encourage him herself; and her astonishment was consequently so great as to overcome at first the bounds of decorum, and she could not help crying out: “Engaged to Mr. Collins! my dear Charlotte — impossible!”

“I see what you feeling, you must be surprised very much surprised, so lately as Mr. Collins was wishing to marry you. But when you have had time to think it all over, I hope you will be satisfied with what I have done. I am not romantic, you know — I never was. I ask only a comfortable home; and considering Mr. Collins’ character, connections, and situation in life, I am convinced that my chance of happiness with him is as fair as most people can boast on entering the marriage state.”

It was a long time before she [Elizabeth] became at all reconciled to the idea of so unsuitable a match. The strangeness of Mr. Collins’ making two offers of marriage in three days was nothing in comparison of his being now accepted. She had always felt that Charlotte’s opinion of matrimony was not exactly like her own; but she could not have supposed it possible that, when called into action, she [Charlotte] would have sacrificed every better feeling to worldly advantage. Charlotte, the wife of Mr. Collins, was a most humiliating picture! And to the pang of a friend disgracing herself, and sunk in her esteem, was added the distressing conviction that it was impossible for that friend to be tolerably happy in the lot she had chosen.

Others in Austen’s works have known unequal marriages.

The opening lines of Mansfield Park address the inequality between Sir Thomas and Lady Bertram. About thirty years ago Miss Maria Ward, of Huntingdon, with only seven thousand pounds, had the good luck to captivate Sir Thomas Bertram, of Mansfield Park, in the county of Northampton, and to be thereby raised to the rank of a baronet’s lady, with all the comforts and consequences of an handsome house and large income. Like Mr. Bennet in Pride and Prejudice, Sir Thomas marries a woman who was a beauty in her youth. Unfortunately, Lady Bertram becomes neurotic, a hypochondriac, and lazy. She values people’s attractiveness over all else. Meanwhile, Mrs. Bennet is a foolish, noisy woman whose only goal in life is to see her daughters married. Because of her low breeding and often unbecoming behavior, Mrs. Bennet often repels the very suitors whom she tries to attract for her daughters.

Such revelations leads one to wonder whether “being entranced” by the opposite sex leads to disappointment in marriage. Please note how Austen’s heroines must turn from the “charms” of unworthy gentlemen [Wickham, Willoughby, William Elliot, etc.] to discover contentment in marriage. Is Austen giving us her opinions of cads and scoundrels? Let us face the truth, the gentlemen these heroines claim are often something of a prig, a man of unbending principles. Is this Austen’s idea of honor? Do you suppose our dearest Jane ever knew such a man? Did she know the disappointment of unrequited love?

I look forward to your insights. Comment below and let’s have a conversation.

2 Responses to Exogamous and Endogamous Marriages in Austen’s Works