A Closer Look at “The Memoirs of Barry Lyndon, Esq.” by William Makepeace Thackeray

Posted on December 2, 2019 by reginajeffers

I have debated whether this post should be a review of the book The Memoirs of Barry Lyndon, Esq. by William Makepeace Thackeray or a review of the Stanley Kubrick movie Barry Lyndon or something in between. In truth, I was researching Richard Bertie for another post, but the happenings in Bertie’s real-life reminded me of the fictional Barry Lyndon, and I had to go back and look at at the Thackeray tale. In addition, I recently set through a screening of this movie in September at the Carolina Theatre of Durham (NC). The film originally came out in 1975, but it was re-released to the “art” theatres in 2016. I can say that it is one of the best costume dramas in existence, but know that it is 3 hours long and is, by today’s standards,  a VERY slow-paced movie. Like Kubrick’s Eyes Wide Shut and Full Metal Jacket, this is more of a character study that “chronicles the picaresque journey of Irish chancer Redmond Barry (Ryan O’Neal) as a British soldier of the 1756-63 Seven Years War, deserter, turncoat hero of the Prussian army, gambler, adulterous husband, devoted father, aspiring aristocrat, and symbolically emasculated wanderer, his travels taking him to Germany, Holland, Belgium, England, and back to the continent around 1789. The film is gorgeously appointed and offers many painterly vistas and static or semi-static dioramas – direct homages to the works of, among others, Hogarth, Watteau, Gainsborough, Stubbs, Constable, Reynolds, Fuseli, Zoffany, and de la Tour and Schalcken, the latter pair inspiring Kubrick’s exquisite candlelit interiors.” (The Arts Desk) 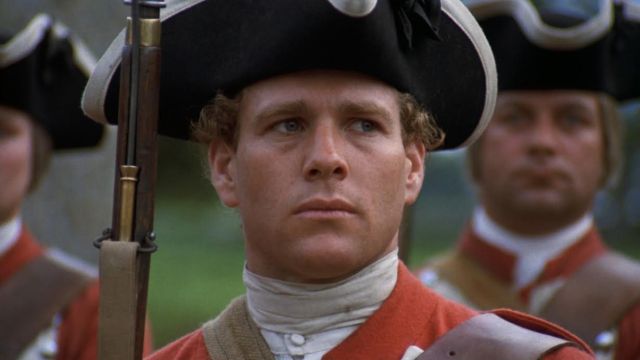 The film fared poorly at the box-office upon its release and received mixed reviews, but it has gained in reputation in recent times and remains one of Kubrick’s better and most underrated films. John Alcott’s cinematography gives the film its elegant look. The movie paints a detailed picture of Europe’s 18th-century period that could have been drawn by master painters such as Constable, Gainborough and Watteau. It’s a sumptuous costume movie that tells both an adventure story and one that’s a comedy of manners, that goes at a leisurely pace for three hours. (Home Pages by Dennis Schwartz)

In April 2017, the New York Arts Organization featured the film in one of those Wordless Music presentations with a 50-piece orchestra. They sum up the movie, which stars Ryan O’Neal as Barry, as such: “Redmond Barry is a young, roguish Irishman who’s determined, in any way, to make a life for himself as a wealthy nobleman. Enlisting in the British army and fighting in Europe’s Seven Years War, Barry deserts, joins the Prussian army, gets promoted to the rank of a spy, and becomes a pupil to a chevalier and con artist/gambler. Barry then lies, dupes, duels and seduces his way up the social ladder, entering into a lustful but loveless marriage to a wealthy countess named Lady Lyndon. He takes the name of Barry Lyndon, settles in England with wealth and power beyond his wildest dreams, before eventually falling into ruin.

As to Thackeray’s novel, the story begins with a teenage Redmond Barry, who loves his cousin, but more importantly, thinks of himself as coming from the nobility. It is this belief, instilled in him by his mother, that brings him glory and ruin. The book does not shy away from reality. For example, although he thinks himself worthy of grand honors and respects, Redmond faces needs of day-to-day survival. They are from the gentry, but from an impoverished Irish family. With thoughts of his “rightful” place in society, Redmond refused to choose menial work or even one of the more acceptable professions. Living with blinders on, Redmond’s aspirations to the nobility destroys him.

In the bibliographical notes of a collection of Thackeray’s works, Walter Jerrold [The Works of William Makepeace Thackeray, J.M. Dent & Co., London, 1903] speaks to the inspiration for Redmond Barry’s character. Jerrold believes Thackeray was familiar with the accounts of the adventures of Andrew Robinson Stoney [later called Stoney=Bowes], who also married a countess [Countess of Strathmore] for money and mistreated her. Parts of Stoney’s real-life tale comes to life in the book.

Barry Lyndon is completely reprehensible, but even so the reader holds a bit of sympathy for him because those with whom he associates are more abhorrent than he. In Depth Info tells us, “When he gets back at a haughty lieutenant or skips town, escaping from an oppressive Prussian secret police, we can applaud his ingenuity. But as he enters the field of matrimony we come to have a dimmer view of Redmond Barry and his self-justifications. This is because many of his early adventures can be viewed almost as a game, a game at which he begins to excel. But later as he contemplates marriage we realize that he is totally unequipped to come to grips with the serious business of life, and ultimately, it is his wife who ends up suffering for his inadequacy, self-destruction, and self-delusion.

“Throughout the work the whole idea of honor, especially as it is expressed in the code duello hovers in the background. Redmond Barry makes use of this almost legitimized threatening force in order to get his way. He acts as an enforcer collecting gambling debts owed to himself and his cheating uncle. He largely bullies whomever gets in his way because he is an expert swordsman and a wicked shot with the pistol. It is interesting that Redmond Barry never kills anyone in a duel. His object is not to so much get others out of the way, but to bend them to his will.

“The underlying message seems to be that this very talented man, Redmond Barry Lyndon, an innocent in his youth is formed by the age in which he lives and through this pernicious code of nobility becomes a monster. Indeed, it is one of the functions of a novel to chronical the change of an individual as he moves through a story. In most works we find the forces of society and nature bring maturity, redemption, or insight – some positive good. In the case of Barry Lyndon the character goes from innocent youth to a thoughtless, self-centered manipulator.”

The Memoirs of Barry Lyndon, Esq.

2 Responses to A Closer Look at “The Memoirs of Barry Lyndon, Esq.” by William Makepeace Thackeray