Posted on April 1, 2019 by reginajeffers

A clandestine wedding plays a key role in solving the mystery that occurs in my latest Regency romantic suspense, Lady Chandler’s Sister: Book 3 the Twins’ Trilogy. But exactly what constituted a clandestine or irregular marriage during the Regency Period?

A clandestine/irregular marriage is what we today might call a “de facto” (describing practices that exist in reality, even if not legally authorized) wedding or even a “common law wedding.”  Irregular marriages were considered legal in Scotland up until the mid 1900s. The laws in Scotland varied greatly from other European countries. Marriages in the European Catholic countries were only legal if they were conducted by a priest of the Roman Catholic Church. In England, marriages were only legal if conducted by an Anglican clergyman. The Hardwicke Act of 1753 saw to that. A couple wishing to marry in England agreed to both a religious sacrament and a legal contract. English couples had to have the consent of one or both parents if they were under the age of 21, and the wedding ceremony had to take place in a parish church and conducted by a man ordained by the Church of England.

But in Scotland, we have a totally different structure. A regular marriage did not require a church as the setting for the wedding or parental consent. It did require the proclamation of the banns in the parish church and an authorized clergyman from the Scottish Church.

Four forms of irregular marriages were considered valid marriages in Scotland until 1 July 1940. An irregular marriage could be considered valid (1) if there was mutual agreement between the man and the woman, a declaration of per verba de presenti—declaring before two witness to take someone as one’s wife or husband, (2) if there was a public promise of per verba de futuro subsequente copula followed by consummation, (3) if the marriage was contracted by correspondence, or (4) if there was cohabitation and repute.

The first two conditions were abolished by the Marriage (Scotland) Act of 1939. All four forms included the agreement of the couple to be married and some form of witnesses or evidence offered as proof of the agreement. Any citizen could witness a public promise. Thus, the reason many English couples rushed to Scotland to be married by a “blacksmith.” The marriage did not actually have to be performed by a blacksmith, just by a citizen of a Scottish border town or village. A marriage of cohabitation and repute was still acceptable until the 2008 Family Law (Scotland) Act. “Repute” was the part upon which divorces were granted or not. This was a common law marriage, and Scotland was the last of the European countries to abolish it. For this law to apply, the minimum time the couple had lived together continuously had to exceed 20 days. Until this act, the only regular marriage available in Scotland was a religious marriage. Irregular marriages were not socially acceptable, and many people who decided to contract them did so where they were relatively unknown. 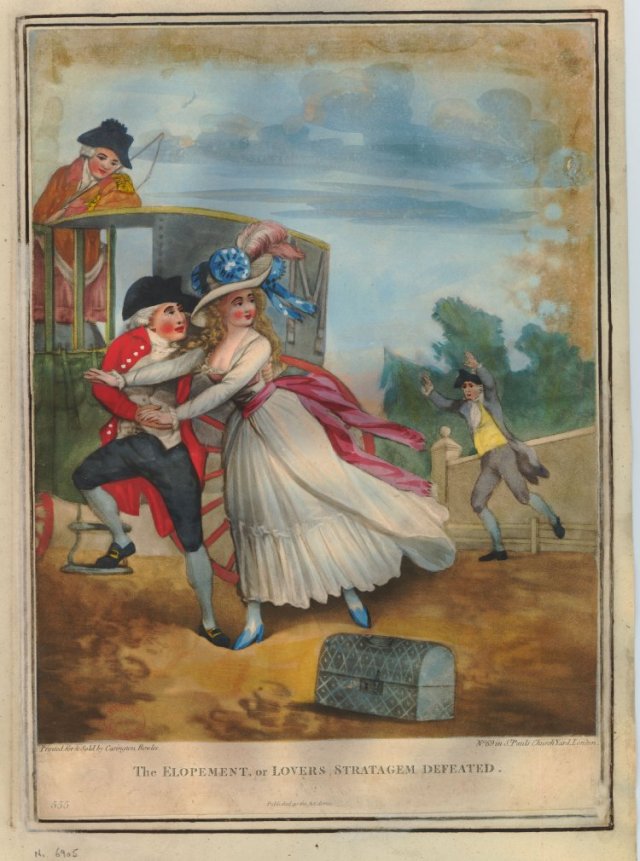 According to Eleanor Gordon in “Irregular Marriages: Myth and Reality,” “The distinctive marriage arrangements of Scotland and England had very real consequences, most notoriously, the vogue for runaway marriages to Scotland, particularly Greta Green and other border towns, by young English couples seeking to avoid the need for parental consent for their marriage and to take advantage of the more flexible and informal marriage laws. Although Lord Brougham’s Act of 1856 attempted to stem the flow of young couples across the border by extending the residential qualification so that one of the parties had to be resident for 21 days, Gretna marriages continued to excite the disapproval of the authorities on both sides of the border into the twentieth century. Indeed it was the resurgence of these border marriages that prompted calls for reform of the marriage laws in the 1920 and 1930s. Although Dr. James Stark, Superintendent of Statistics under Scotland’s first Registrar General, William Pitt Dundas, described Scotland’s marriage laws as simple in comparison with “the complicated marriage laws of England,” they were in fact characterized more by ambiguity and uncertainty than clarity.For example, there were innumerable legal wrangles about whether particular situations demonstrated sufficient proof of exchange of consent as well as general misunderstanding of the nature of consent required, that is whether it needed to be expressed, written or tacit. Indeed when Scotland’s marriage laws were reviewed in both 1868 and 1935, it was the legal ambiguities surrounding irregular marriage that was one of the key reasons proffered for abolishing it.” [W. D. H. Seller, “Marriage by Cohabitation with Habit and Repute: Review and Requiem?” in D. L. Carey and D. W. Meyers (eds.), Comparative and Historical Essays in Scots Law (Edinburgh, 1992): 117–36.]

If contested, marriage by cohabitation was never legal in England. The fact was that most of the marriages by cohabitation or that of wife selling were invalid made little difference to the majority of the populace. Such distinctions only mattered when a child was declared legitimate or not and when a parish had to decide whether or not to give assistance to a woman in need. A couple who were married by cohabitation were, generally, not considered “respectable.” To be valid a marriage had to be started with a wedding in front of a clergyman. That is why so many went to the Fleet to get married by clergymen debtors. Women who lived with their betroths or declared themselves married without more than consummation, in England, found themselves unable to claim any property, any money or any benefits for themselves or the children because they were not considered legally married.

The world wars of the 1900s put a greater demand upon having a regular marriages. Inheritance and widows’ pensions required proof of a marriage beyond two witnesses marking a public commitment between a man and a woman. Registry offices served the need to legitimatize a marriage.

Nicol Warren on the Family Ancestry Detective Website suggests, “The National records of Scotland holds some irregular marriage information, on their website they have a pamphlet that gives the contact details of local society’s that may have more specific records. At the time of the marriage records may have been kept by priests and the couples, however it’s the kirk sessions where couples come before their local parish church that are the most kept records of an irregular marriage. With the birth of the first child meant paperwork would become an important part of legitimising the birth and registration generally happened hastily around that time. Kirk sessions like the South Leif kirk sessions recorded 1500 marriages. With the digitalisation of records all the time, it is always good to search through paid subscription sites to see whether the information is there.”

In this example from 1773 (National Records of Scotland reference OPR 818/2) a couple made a public acknowledgement of their irregular marriage and paid a fine of a guinea to the poor. The entry is followed by a note of the kirk session’s concern at the frequency of irregular marriages in the parish and their decision to increase the fine!

The Elopement, or Lovers Stratagem Defeated. Courtesy of the British Museum. from All Things Georgian https://georgianera.wordpress.com/2015/10/01/an-irregular-marriage-arthur-annesley-powell-did-he-go-willingly/

NOW FOR THE GIVEAWAY!!! I have two eBook copies of Lady Chandler’s Sister available for those who comment below. Winners will be announced on April 7.