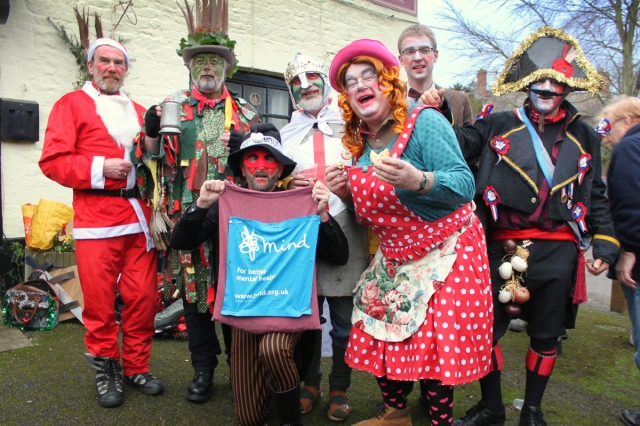 Closely related to the Morris and Sword Dancers, the Oxfordshire St. George Play is considered a kind of Mummers Play. As well as possessing close elements of kinship, the characters in all these plays are largely interchangeable. That being said, the Oxfordshire St. George Play is unique because its chief character is heroic. Saint Plays and Miracles (Clifford Davidson) at Oxford Bibliographies tells us, “Shows based on the lives and martyrdoms of saints appear perhaps to have been the most widespread type of religious theater across Great Britain. There are known to have been plays or entertainments on nearly fifty saints, with well over a hundred instances of performance recorded, albeit mainly lacking extant texts. Considering that the records, both ecclesiastical and civic, that have been preserved represent only a sampling of what was once available, we can extrapolate that such plays were immensely popular with audiences—much more popular than the morality play, which barely registers historically until the early modern period. Saint plays offered scope for creativity and extravagant theatrical effect, and, linked to the cults of the saints deeply rooted in popular religion, they appealed to a common pre-Reformation religiosity. In many cases, performances seem possibly to have been projects of a parish or religious guild, each likely to have possessed a saint as its patron. Thus, the church of St. Denys in York had a play of “Sancti Dionisij,” and the Norwich St. George guild sponsored a pageant and riding of George, the latter involving a dragon, which survived the change of religion in the 16th century. Every pre-Reformation church had images, wall paintings, and stained glass, not only of the Virgin Mary but also a selection, depending on local preference, from a panoply of available saints. These ranged from the popular St. Christopher or St. Catherine to lesser known saints, sometimes venerated only locally in a particular town or region. Individual images might themselves be the focus of intense veneration because of the beliefs that devotion to the representation served to connect one in a mystical way to the actual saint and that prayers thus directed might be effective for assistance in this life or for alleviation of the pains of Purgatory.

The drama of the saints cannot be separated from these aspects of late medieval religion. From the evidence in the extant texts and descriptions, however, there is no reason to suppose that the dramas were always necessarily spiritual in their principal focus, nor were they didactic in the usual sense of teaching doctrine. For example, the St. George skits, plays, and pageants, which were widely distributed, are likely to have been usually presented as entertainment. Some of these, and other saint or miracle plays, may have been unscripted. In drama, as in music, unscripted improvisation has its place. Full and extant Middle English texts, all from East Anglia, treat Mary Magdalene, St. Paul, and the Virgin Mary, the latter incorporated into the N-Town collection. Also perhaps appropriately included in this list is the Lazarus play added to the end of the Towneley manuscript, where it follows the Last Judgment. Another East Anglian drama, the Croxton Play of the Sacrament, is a miracle play with close affinity to the saint play. Three fragments have been proposed as miracles of the Virgin: the Ashmole Fragment, the Durham Prologue, and Dux Moraud. Finally, in Cornish there is an extant play of a Breton saint, St. Meriasek, and, recently discovered, another of St. Kee, unfortunately lacking a complete text. There is also a short late medieval Welsh play of The Soul and Body. The plays that survived were those that escaped the distaste of the Protestant reformers, whose hostility also expressed itself against the images of saints in churches during the period of iconoclasm. Another, and perhaps no less important, factor was the neglect suffered by play texts both before and after the Reformation.”

The Oxfordshire St. George Play often includes a Morris Dance or a Sword Dance as part of the production. The central element represents the death of winter and the resurrection of the world in spring, but the incidents came to have less and less meaning to those watching the plays that the plays soon became part of the ecclesiastical feasts during the Christmas season. Father Christmas became a standard character in the plays. We also find a Turkish knight, an element of the Crusades. In most of the stories, the knight slays Prince George.

A modern representation of the these Leicestershire plays can be found in Thomas Hardy’s The Return of the Native, Book II, chapters IV and V. The character may be St. George or Prince George or even King George. “George” is not always successful, but when he is killed, a comic doctor revives him. After the prologue, a fight and a resurrection occur, which is followed by a comic scene and a dance, with a request for money coming from Father Christmas at the end. Occasionally, Beelzebub with a frying pan gathers the money. A clown is another substitute for the money collector. The play is always casual in their presentations, introducing themselves to the audience. Action and noise abound.

F. G. Lee printed the Oxfordshire St. George Play in 1874. In his “Notes and Queries,” we find this comment: “The text of this play was taken down by myself from the lips of one of the performers in 1853. … The man from whom I took [it] down … had performed at Brill, in the year 1807, and his father had done the same at Thame Park in the previous cemetery.”

ElfinSpell tells us, “Mr. Chambers in his Medieval Stage devotes a chapter to the Saint George Play (vol. i, 205 ff.), listing twenty-seven printed versions on which his account is based. The play is distinctively a play, with characters playing individual parts, as distinguished from the 117various sword and other dances which sometimes include dramatic features, but with few and indefinite characters, a connecting feature being that in some cases in the dances a doctor appears as in the Saint George Play. This play seems far to have surpassed other forms of mummers’ play in popularity. For the general subject of folk-plays, see the volume announced by the Folk-Lore Society under the editorship of T. F. Ordish, who has already treated it in Folk-Lore, vol. ii, 326, vol. iv, 162.

“The play consists characteristically of three parts, the “presentation,” in which the persons, as they are successively announced, come forward or “enter” from the half circle in which they stand; the “drama” proper; and the “quete,” or passing round a suitable receptacle for gifts of money, which terminates the performance. The serious presentation of the story of Saint George, forming the kernel of the play, has, as will be seen, long since merged in rustic burlesque and foolery, for which Dr. Lee felt it necessary to offer his quaint apology. That the story should have been turned into extravaganza was inevitable, if it was to be perpetuated at all, after its original inspiration had disappeared with the conditions of life and belief which originated and fostered it. Degenerate and intrinsically trivial as the modern versions of these plays are, they are, however, of real interest and value in illustrating the persistence of tradition, and above all as attesting the natural tendency of popular drama to turn to national tradition and history for themes for dramatic presentation.”

(The script for the play may be found HERE.)