Do You Know the History of ®Murine Eye Drops?

I am forever adding allergy drops to stop my eyes from itching and later adding eye drops to prevent the dryness. It got me thinking… 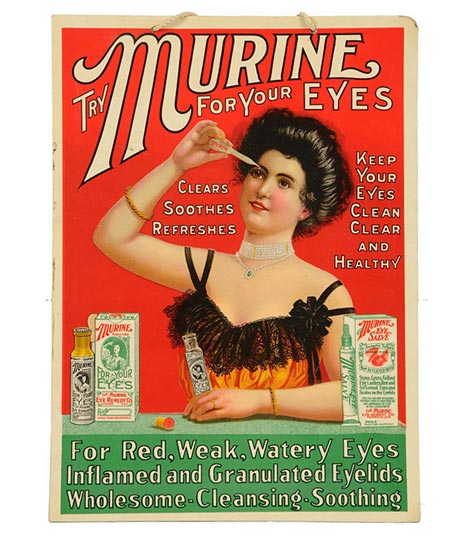 Murine UK tells us this about the history of ®Murine: “The Murine® Eye Drops brand was first launched in the 1970’s with a pharmacy strength eye drop containing a medicine known as a vasoconstrictor, which acts by constricting the blood vessels in the eyes to reduce redness. Over the years, the Murine® range of products has continued to grow, offering specialist solutions for a number of common eye conditions such as red, dry and hayfever eyes.”

However I found a “more interesting” tale about ®Murine. I do not know whether it is true or not, but it a grand story.

Otis F. Hall was one of the three founders of the Murine Eye Remedy Company, serving as its secretary and general manager. He was born in Auburn, New York, in October 1848, but soon found himself and his family in Michigan. He entered the banking business as a cashier at the People’s Bank of Manchester, and later he joined a private banking business with J. A. Sexton in Detroit. He spent time with the Second National Bank of Detroit, the D. M. Perry Company, and the Gale Sulky Harrow Company. At length, Hall traveled to the West Coast and founded the Old National Bank of Seattle. It was from there that the story of Murine came about.

According to the story, around 1890, Otis F. Hal was discussing a broken shoe on a friend’s horse. As he bent to examine the shoe, the horse swished his tail, which struck Hall in the right eye, cutting the cornea’s surface. An ulcer developed. When nothing he tried had proven beneficial, Hall and his son traveled to Chicago to engage the most renowned ophthalmologists of the time, Doctors James B. and George W. McFatrich.

Under the doctors care, Hall’s eye healed within a few weeks. Moreover, Hall’s son was also cured of a minor eye irritation. The doctors used a specially prepared eye lotion that they had compounded in their lab. Mr. Hall, recognizing an opportunity, pressed the doctors to make the compound available upon a wider basis. However, the McFatrich brothers were not easily persuaded. It took Hall several years to convince them to mass produce the mixture. Hall and the McFatrichs formed the Murine Eye Remedy Company, naming the product after the chemical formula – muriate of berberine. They used the “mur” + “ine” from the two words, creating ®Murine.

The trio also founded the Northern Illinois College of Ophthalmology and Otology of Chicago. Hall died in October 1918.

4 Responses to Do You Know the History of ®Murine Eye Drops?