Did Richard II “Invent” the Handkerchief?

Posted on February 9, 2017 by reginajeffers

Okay, I will admit up front the history of Richard II’s reign is NOT my area of expertise, and so I do NOT mean this piece as a “history” lesson. Rather it is meant to be an interesting historical “tidbit.” You decide whether Richard II had a “hand” (get it???) in the invention of the “handkerchief.”

Richard II and Anne of Bohemia

That being said, Tim Shaw’s Daily Medieval tells us, “Richard II (1367-1400) had all of the elegance and none of the political savvy or military skill required of a king of England in the 14th century. He was given to–and ridiculed for–extravagances and fastidiousness that shocked many of his contemporaries. In an attempt to curb his excesses, he was put under the regency of a council called the Lords Appellant. Richard decided to negotiate a peace with France and devote his energies and finances to overthrowing the Lords Appellant. The Merciless Parliament of 1388 was called to curb him. During the process, Parliament convicted most of Richard’s advisors of treason. The charges against them include lists of extravagances such as richly decorated garments and household furnishings.

“At a time when such excesses were worthy of condemnation, something like the following line–a description of an order from the king’s tailor, Walter Rauf–would surely make heads turn and eyes roll:

“Why does this stand out? Prior to this, the sleeve was the primary receptacle for the things for which we now use handkerchiefs or tissues. Stella Mary Newton, in her Fashion in the Age of the Black Prince,  does not find any evidence of handkerchief use in the courts of Europe. This seems to counter the theory that Richard picked up this “foppish” practice from France.* We know the Romans used a piece of cloth called a sudarium for wiping sweat, but that is not likely where Richard got the idea, since there is no evidence that the sudarium survived as a custom in Europe. So maybe Richard did invent the pocket handkerchief.”

*Richard was raised in France, where his father, Edward the Black Prince, held much land thanks to Edward III’s successes in the Hundred Years War. In fact, it’s pretty certain that Richard never bothered to learn English.

Meanwhile, BBC History tells us, “Richard is the first king that we know for sure what he looked like, in part because of his own conscious attempts to raise the personal place of the monarch, through the active use of imagery and artistic representation, the most notable example being the Wilton Diptych, a portable altarpiece and Richard’s own portrait, which now hangs in Westminster Abbey. Richard constructed the first royal bathhouse, may well have invented the pocket handkerchief and used a spoon for the first time. In his patronage of architecture and personal piety, his reign has a powerful legacy in some of the key parts of Westminster Great Hall, York Minster and Canterbury Cathedral. Richard built the magnificent hammer beam roof for the hall, which can be seen to this day. The medieval parliament and king’s court often sat under its carved angels and it was from here that the kingdom was ruled.”

In Mr. Giotto’s Online Textbook, under “The Kings of England: Richard II and Three Henrys,” we are told, “Richard, unlike his grandfather and father, did not care for carrying on the war with the French. On the contrary, he enjoyed French cooking, creating the first royal cookbook. Richard was into manners, he created the first handkerchief, as he was appalled by the habit of wiping one’s mouth or nose on his or her sleeve at the dinner table.” 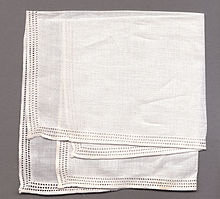 Rampley & Co. of London gives us a bit more information regarding the History of the Pocket Square. “Some people believe that the pocket square in one form or another can trace its origins back to ancient Egypt, where small linen cloths were dyed with a red powder that indicated they were used for decorative purposes and as an example of wealth. However, this is quite a leap of faith and small pieces of coloured cloth don’t necessarily translate directly into what you would consider a modern day pocket square.

“There are also those that trace it back to the Ancient Greeks who carried a cloth with scented perfume in order to ensure they always had a pleasant smell nearby or the Romans who used pieces of cloth to start the Gladiatorial Games, with the event starting when the Emperor dropped his handkerchief.

“Some claim the first use of a handkerchief being worn as an accessory was in 800’s where members of the Catholic Church would attach a white handkerchief to their left arm as a representation of their devotion to God and their church or that King Richard II of England was the first person to wear a handkerchief as a fashion accessory while on the throne between 1377 to 1399. Although it’s clear people have been using squares of material for various uses for a long time, we’re not convinced that this is a justifiable comparison to what is now deemed a pocket square.”

Finally, Wikipedia tells us, “Before people used the word handkerchief, the word kerchief alone was common. This term came from two French words: couvrir, which means “to cover,” and chef, which means “head.” In the times of ancient Greece and Rome, handkerchiefs were often used the way they are today. But in the Middle Ages, kerchiefs were usually used to cover the head. Then in the 16th century, people in Europe began to carry kerchiefs in their pockets to wipe their forehead or their nose. To distinguish this kind of kerchief from the one used to cover the head, the word “hand” was added to “kerchief”. King Richard II of England, who reigned from 1377 to 1399, is widely believed to have invented the cloth handkerchief, as surviving documents written by his courtiers describe his use of square pieces of cloth to wipe his nose. Certainly they were in existence by Shakespeare’s time, and a handkerchief is an important plot device in his play Othello.”