“In my opinion, it seems to me that Jane Austen was an overrated author. The reason why I think this is true is because I feel…”

In this age of self-publishing we find a plethora of examples of poor writing. I am not saying some of what is published by traditional publishers is not equally as troublesome, but many self-published writers also lack the skills to edit their mistakes.

Now that I have mentioned that dreaded 500-words’ essay, do you also recall the grade you received on it? Was it because you “padded” the essay to fill the word count. Instead of stuffing your sentences with cotton balls, try to eliminate the padding. Make your sentences leaner.

Rather than circling warily around what you want to say for a half page or more, you need to illustrate the details. You must also learn not to hedge on a subject. If the person is a fool, call him one. Do not spend time with “in my opinion” or “as I see it” or “from my point of view.” Say what you wish to say. Avoid euphemisms. Admittedly, in certain time periods, euphemisms are plentiful to soften subjects that are sensitive or taboo. Just think of the number of ways to say that someone died: passed away, pushed up the daisies, met his Maker, kicked the bucket, cashed in his chips, etc. As I write books based in the Regency, I am conscious to say with child or enceinte for pregnant. I also include phrases such as “lying in” to describe the weeks leading up to the baby’s delivery.

However, do not toss in every word or phrase within your vocabulary. Is it not better to read, “To be or not to be, that is the question,” than to read “To continue as a social unit or not to do so. That is the personality problem. Whether it is a better sign of integration at the conscious level to display a psychic tolerance toward the maladjustments and repressions induced by one’s lack of orientation in one’s environment….” [“What Do You Mean by Rhetoric?” by J. R. McCuen and A. C. Winkler]

Be conscious of “pat” expressions. They are often hard to avoid and appear to be necessary, when they are. Pat expressions include phrases such as “under cover of darkness,” “worked his fingers to the bone,” “when all is said and done,” “the pure and simple truth,” “took the easy way out,” etc. The trouble with pat expressions is that they some time stand between the writer and the reader’s understanding. So, phrases such as “our national heritage” does not say everything we wish it to do. 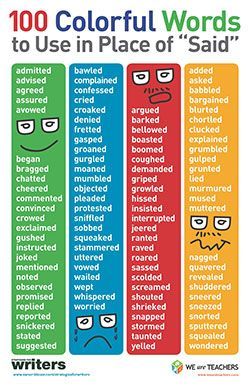 Discovering the right word is the author’s bane. Some words are “colorful.” Instead of “She sat in the chair,” why not use sprawled, lazed, lounged, etc. The 19th Century in which I write prefers its prose to be rich, while the 20th Century took a leaner approach. In opposition to colorful words, we also have “colored” words. Those are words with attached associations, good or bad. The meaning of a word is the sum of the contexts in which it occurs. Liberty, patriotic, mother, childlike, etc., possess positive associations, while reactionary, radical, mother-in-law, foolish, etc., hold negative tones. Finally, writers may use colorless words. As a former English teacher, I despise words such as nice, hot, cool, dude, etc., for they add nothing to the description. There are also nouns of very general meaning, such as instances, factors, attitudes, relationships, etc. “In some circumstances you will find that those cases of writing which contain too many instances of words like these will in this and other aspects have factors leading to unsatisfactory relationships with the reader resulting in unfavorable attitudes on his part and perhaps other eventualities.” Notice that “etc.” means, “I’d like to make this list longer, but I can’t think of any more examples.” [McCuen and Winkler]