I have a dear friend who is really into antiques, and I must tell you that she is a wealth of knowledge — a tap I often go to for just that special touch in a story, but I will admit I knew nothing of Thomas Tompion until this friend was on an internet search for a particular style of clock, known to represent Tompion’s style.

So, what of you? Are you as ignorant of Thomas Tompion as was I? It is not easy to learn much of Tompion’s early years. He was born, the son of the local blacksmith, in Ickwell Green, Northill, near Biggleswade in Bedfordshire. He was baptized in July 1639, which is the mark of his birth in the records of the time. Keeping in mind that blacksmiths were the experts in metalworking trades at the time, we assume Thomas learned much within his father’s shop. Precision was the mark of much of Thomas’s work in later life. He was an English maker of clocks, watches, and scientific instruments who was a pioneer of improvements in timekeeping mechanisms that set new standards for the quality of their workmanship.

Around 1671, Thomas agreed to spend several years as an apprentice (a “brother”) in the Worshipful Company of Clockmakers before obtaining his freedom as a journeyman in 1674. Two years later, he was appointed clockmaker for the new Royal Greenwich Observatory, having been commissioned by Charles II to make two clocks that were accurate enough by which astronomers could use them to make calculations and that they only needed to wound once a year. It is said that John Flamsteed, Astronomer Royal, was able to prove his theory that the earth spins on its axis at a uniform rate with the use of Tompion’s clocks. 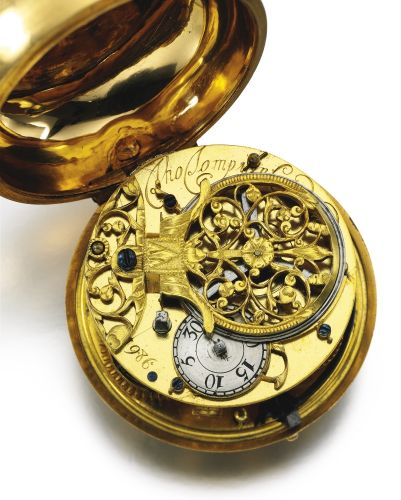 Elected to the livery of the Clockmakers’ Company in 1691, Tompion served as junior warden in 1700 and rose to master in 1703. About 1707 Tompion was made a freeman of the city of Bath, where he is believed to have sought relief for an ailment, and he presented the city with a month-going timepiece still in use at the Pump Room.

According to an article by Jeremy L. Evans for Encyclopedia Britannica, “Tompion was among the first to apply Christiaan Huygen’s invention of the balance spring to watches. In particular, he is credited with inventing the Tompion regulation (1674–75), and he was the first (1695) to construct watches with a practical form of horizontal escapement. In clockwork, Tompion used early forms of dead-beat escapement (1675–76), and he introduced pendulum spring-suspension for table clocks and Barlow’s rack-striking mechanism (both about 1680). He was one of the first to use efficiently profiled machine-cut gearing and to protect movements from dust.

“Tompion’s practical skills enabled him to supply any type of horological item, and his versatility is displayed by his earliest known commissions: a church bell of more than one hundredweight (8 stone, 112 pounds, or about 51 kg) in 1671, a turret clock for the Tower of London, a quadrant of 3-foot (1-metre) radius for the Royal Society in 1674, and a balance-spring watch, under physicist Robert Hooke’s instruction, for King Charles II  in 1675. 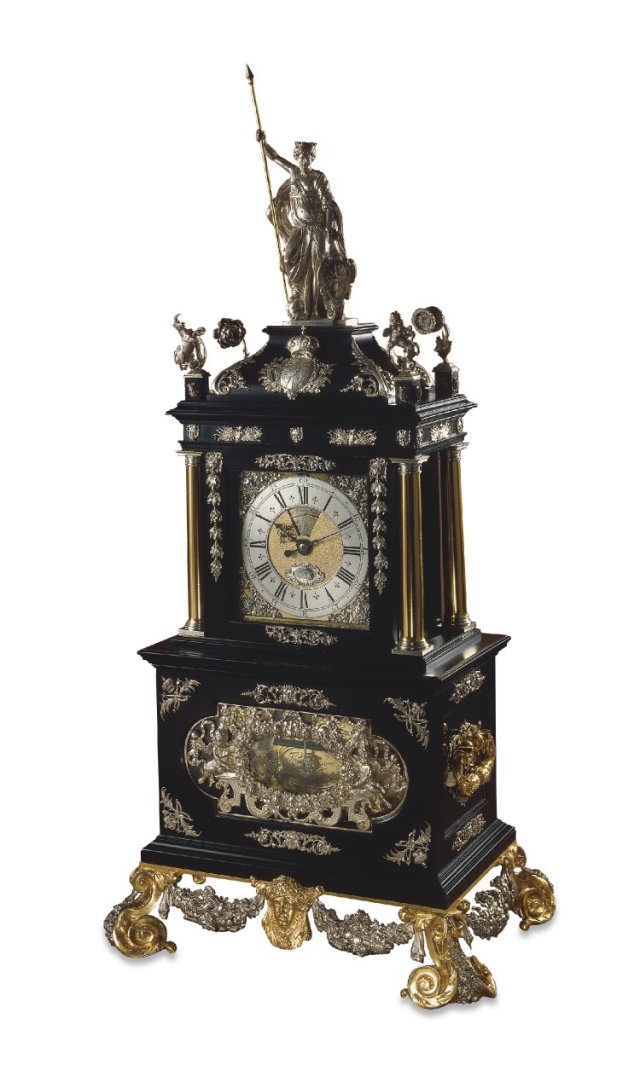 “By this time, Tompion was established in business in Fleet Street, where he traded for the rest of his life at the sign of the Dial and Three Crowns. Remarkably, within just a few years of his arrival in London’s horological community, he had become its most renowned member, and, with sound business acumen, he capitalized on the demand for his work and was soon the leading retailer. In 1690 ,he was employing as many as 20 people at his establishment. His customers were chiefly from the wealthiest classes—royalty and the aristocracy of England and other European countries. He also supplied items for presentation as diplomatic gifts. Some of his finest work, possibly in collaboration with the designer Daniel Marot, was for King William III and Queen Mary II; examples include an outstanding year-going spring clock and a highly complicated traveling clock. Two year-going equation longcase clocks still in the royal collections were made for William III and Prince George of Denmark. 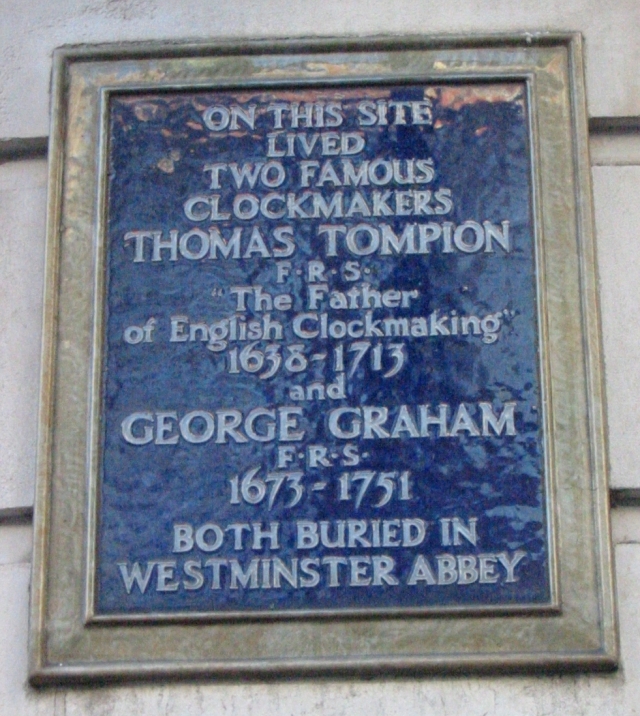 “About 1701 Tompion took into partnership Edward Banger, who had been trained in the business and had married his niece, but Banger was apparently dismissed from the premises about 1707, and for the next few years items were retailed with Tompion’s name alone. About 1712, Tompion took into partnership George Graham, who had married another niece, and Graham succeeded to the business on Tompion’s death. (Graham also shares the distinction of being buried in the same plot and covered by the same stone in Westminster Abbey.) During his life, Tompion retailed about 700 clocks and 5,500 watches—including about 400 complicated repeating watches, as well as a small number of scientific instruments such as barometers, dials, and even a lunarium. He was one of the first to number his items in series.”

Tompion was also known for his mantel and grandfather clocks. His father’s old smithy has been restored and is used by the local football club as a changing room.

2 Responses to Thomas Tompion, “The Father of English Clockmaking”