The life of a female servant in an English household of the 18th or 19th Century was a lonely one in terms of romantic entanglements, and we can only imagine how easily such a woman might be tempted to “taste” what her position denied her. The idea of a young girl, with aspirations of marriage and of love, entering her first position, only to encounter the handsome son of her wealthy employer to be seduced is a common motif in many historical romances. But how “common” was the situation?

Needless to say, the majority of the female servants were moral and respectable. They would not consider such an alliance, finding the “suggestion” of an assignation as repugnant. However, we must keep in mind that the choice of a marriage partner was greatly limited by their position. That was not to say that NONE achieved a higher position. According to Frank Huggett’s Life Below Stairs [page 117], “In 1763, Thomas Coutts, co-founder of the bank that bears his name, married his brother’s housemaid, Susannah Starkie, the daughter of a small farmer from Lancashire. Before she died in 1815, she had seen her first daughter marry the third Earl of Guildford; her second daughter, the first Marquis of Bute; and her third, Sir Francis Burdett. (Her husband’s fortune was, of course, a big attraction.) Samuel Horsley, Bishop of St Asaph, also married a servant. Shortly after his first wife died in 1777, he married her maid, Sarah Wright. Edward Miles, a nineteenth century Quaker, not only had two careers as a druggist and a dentist but also two wives – the second under common law – both of whom were servants.

“Such marriages were commonplace in ‘silly, sensational’ magazines, but much more exceptional in real life. The peak of most girls’ possibilities had been reached, if they were fortunate enough to marry an honest butler or footman (Downton Abbey plot between Daisy and William Mason, as well as Carson and Mrs. Hughes), who might then set up as a shopkeeper, a cabbie, a publican or a boarding house keeper on their joint savings, small businesses which seem to have failed almost as often as they succeeded. Otherwise, they could hope to marry a man of no higher social standing than a groom, a tradesman, a policeman, a soldier, or a sailor. Many of them returned home, with their little nest eggs, to marry the ‘penny post correspondent’ whom they had left behind in their own village years before.” 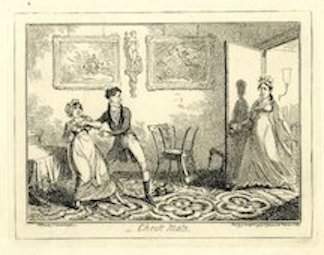 (Image via http://www.britishmuseum.org – Cruikshank’s “Check Mate) Yet, there many who did succumb to the perils of life below stairs. Male servants could set the eyes upon a naive miss. Gentlemen guests in the household sometimes took advantage of the females (another plot in Downton Abbey when Anna Bates is raped). Employers’ sons could also be a threat, as well as the master of the house himself.  Being sent on an errand, especially at night, could prove hazardous for unsuspecting females. The girls could be followed by a “young, disreputable gentleman in his cups” or a street thug. Sailors streamed upon shore and sought out “satisfaction” in port cities. Uniformed soldiers could affect (or is the word “infect”) many a servant girl with “scarlet fever.”

We must also remember that the expectations of a girl from a small village or rural community were quite different from those from the gentry and the aristocracy. In reality, the female from the rural communities likely held a better idea of “sexual matters” in nature than did the young ladies in Town. There were also rural traditions, such as “hand-fasting”in Scotland and “bundling” in Wales, as well as wife-swopping and trial marriage among those who kept with the older ways. Ancient orgiastic rites did not fall away so easily. And there still hiring fairs in the rural areas where farm and domestic servants were acquired, sometimes to the detriment of the females. However, a few “dollymops” cooperated with those who approached them in exchange for a bit of money or a present.

“There is no means of knowing how many servants were also part-time prostitutes, or enthusiastic amateurs as we might call them, but according to some contemporary experts the number was surprisingly high. One of the greatest authorities on early Victorian prostitution was William Tait, who saw many of the final, and often fatal consequences in Edinburgh Lock Hospital (for venereal diseases), where he was the house surgeon. He estimated that there were about eight hundred full-time professionals in the Scottish capital; but, in addition, there were no less than three hundred servants working part-time at the same trade. Nurses, who had the greatest freedom to spend many hours out of doors, were sometimes inclined to combine their regular calling with a little moonlighting, even, occasionally, in broad daylight. One nurse from ‘a very respectable family’ used to leave her two young children sitting in the High Street, while she went off to oblige a gentleman in a house of assignation nearby. Most of these ‘clandestine prostitutes’ were ‘common servants’, like the one from Leith who visited a house in Edinburgh every alternate Sunday night for four years; but governesses, ladies’ maids and housekeepers were also involved.” (Huggetts, page 122) Imagine the master of the house meeting one of his servants in a house of ill repute. It happened to several.

9 Responses to Life Below Stairs, Part 5 – The “Fallen” Female Servant