Posted on November 15, 2019 by reginajeffers

I am thrilled to have Betty Bolté join us today on the blog. Betty writes in several genres, and she is one of the authors I share duties with in the Common Elements Romance Project. You can learn more about the project HERE. Or enter the November Giveaway for your choice of one of the books released this month from the Project. Enter HERE.

For now, let’s learn something of Betty Bolté.

First, tell us a bit about yourself. From where do you come? Past jobs, awards, the usual bio stuff.

I have been a word lover since I learned the alphabet and started reading at age 5 years. Despite my love of language, my first jobs were as a Sunday morning bus girl at a restaurant, as a waitress at McDonald’s and a donut shop, and after high school I worked for a while at a department store. I worked there while I waited to be hired to work for the federal government as a clerk, and then after I’d worked as a clerk for a couple of years I switched to being a secretary for several “Beltway Bandits” corporations around Washington, D.C. I left the corporate world in 1988 to start my own word processing business from home after I’d married my husband. From then on, I worked at home as much as possible as a writer or technical editor. I’ve written magazine articles, essays, newspaper articles and a column about our experience as part of the Sandwich Generation (having my father living with us, 3 generations in one house). I’ve written several nonfiction books, all while working on learning how to write fiction. One highlight of my career is that for several years, I worked as a technical writer/editor for SAIC supporting the Marshall Space Flight Center in Huntsville, Alabama, editing real rocket science.

I write in a variety of genres: historical romance, historical fiction, paranormal romance, and I’ve started a new series, the Fury Falls Inn series, that combines the historical with paranormal and a touch of romance. I published my first 4 romances in 2014, 2 by a digital press and 2 from a hybrid press. One of my books won an honest-to-goodness gold medal, Hometown Heroines: True Stories of Bravery, Daring, and Adventure, from the Children’s Literary Classics organization in 2015. They invited me to an award ceremony in Las Vegas where they placed the medal around my neck, too. That was quite a moment in my career! With the release of Charmed Against All Odds this month, I will have published a total of 20 fiction and nonfiction books.

Tell us about your new release.

Charmed Against All Odds is the fifth book in my Secrets of Roseville paranormal romance series. It’s also one of the titles included in the Common Elements Romance Project collection of stories, each including the same five elements but used in any number of ways. Set in the quirky small town of Roseville, Tennessee, the Secrets of Roseville series features five women who are witches and mediums and have some fun adventures as a result. In Charmed Against All Odds, Roxie Golden has to come to terms with her ex-fiance Leo King returning to town unexpectedly and against his will. They’re forced to work together to find a series of 6 enchanted charms in order to first, end their reluctant partnership and second, learn their destiny.

What was your favorite chapter (or part) of your current project to write and why?

Writing the backstories for the incidents that each of the charms represents in Roxie and Leo’s previous relationship proved both fun and challenging. I really had to think about what their lives had been like as children and teens before the falling out that ended their engagement. At the same time, I wanted to give each charm a specific meaning and reason for being part of this visual reminder for Roxie to wear in their new relationship. I found a company that makes each of the charms I feature in the story. I’m still pondering whether I want to make my own charm bracelet…

How do you choose your characters’ names?

I’ve used a variety of resources to consider possible names for my characters. Depending on whether it’s historical or contemporary, those options change. I’ve used census records of the most popular names from the 1920s when writing a World War Two novel, for example. I’ve gleaned names from the historical research books of Alabama for my Fury Falls Inn series, The Haunting of Fury Falls Inn is book one, set in 1821 Alabama. I’ve consulted baby name lists for my contemporary stories and the Character-Naming Sourcebook which includes the meanings behind the names by region/country. I’ve also pulled names from my own family tree and people I’ve met. 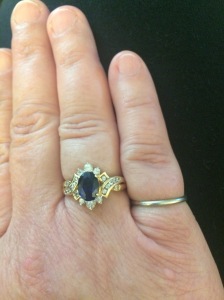 Since Roxie is a witch, and in my story I’ve created the Order of Witchery Lore (OWL), I needed to find out more about Wicca and what I could learn as to the jewelry people of that faith would wear. What it means, how it’s important, and then reflect that in my story. From the Wicca Spirituality site (https://www.wicca-spirituality.com/wiccan-jewelry.html), I learned that the third finger is the heart finger (thus why relationship rings are typically worn on that finger) and rings worn there are “especially powerful.” The index finger is also powerful as the creation finger. Judgement and restraint center on the middle finger. Communication—Roxie’s strongest power and the Order’s mission—comes from the pinky finger. So I chose to have the OWL membership ring be worn on the right pinky finger. I actually blogged about this topic in more detail (https://bettybolte.net/?p=3231) if you’re interested in finding out more. I actually typically wear a ring I bought when I received my MA in English on my 3rd finger, and my dearly departed mother-in-law’s wedding band on my pinky, which makes me think it helps with my creativity.

Can you tell us a bit about your upcoming projects?

I have my WWII story, Notes of Love and War, out to beta readers now. It’s a historical women’s fiction story set in Baltimore, Maryland. It’s inspired by reading my parents’ correspondence during and after the war. I’m also getting ready to write the second book in the six-book Fury Falls Inn series, Under Lock and Key, which I hope to release by summer 2020. I am debating how to publish Notes of Love and War and another 18th-century historical women’s fiction story about Martha Washington’s life that I’ve written. So plenty to keep me out of trouble!

Charmed Against All Odds

Loving her brings out the magic in him…

Wedding bells are ringing, but not for Roxie Golden. If she can survive another round of wedding plans, then her life can return to normal. She’s perfectly happy running the bookstore and weaving helpful magical spells. Then one stormy day, her ex-fiancé strolls back into her life with a gift neither of them wants.

Leo King wants to flee the small town for the big city. Forget about the shame he brought upon himself when he abused his magical powers. First, to satisfy his warlock father’s final wish, he must deliver the mysterious box to Roxie’s bookstore.

But when Roxie opens the box, revealing an enchanted bracelet and a quest spell, their plans and their lives are changed forever. Trapped in a reluctant partnership with the woman he once loved, he risks everything—including his heart—for a second chance.

Excerpt from Charmed Against All Odds:

“What do you think you’re doing?” His deep, gravelly voice grated on Leo’s nerves.

“Nothing. Just looking around.” Leo matched the man’s smile with one of his own. No way would he share their true purpose for returning to the nostalgic old theater.

“Do you have tickets?” The manager raised one brow as he stared at Leo.

“No, sir.” Leo’s smile withered and fell away. “Like I said, we simply wanted to see the lobby again.”

“We haven’t been here in a very long time.” Roxie smiled, a much more sincere and thus believable friendly expression than either of the two men had attempted. “Nothing’s changed.”

“One thing has for certain.” The man’s pale blue eyes glinted in the light shining from the bright chandeliers. “You have to buy a movie ticket before you come into the lobby. This isn’t a sightseeing stop on some tour.”

“We only need a few minutes and we’ll be out of here.” Leo cut a glance at Roxie, who nodded.

“Either buy tickets to watch a movie or leave. Those are your options.” The manager crossed his arms over his narrow, self-righteous chest, his Adam’s apple prominently sliding up and down his scrawny throat. “No exceptions.”

“But—” Leo objected with his entire being. He couldn’t do it. Even if his libido wanted him to.

Sit in a darkened theater with Roxie at his side. Within reach of draping his arm around her, her head resting on his shoulder. Or playing thumb wars while they watched the movie. Sharing buttered popcorn out of a large tub between them, their fingers brushing when they both reached in at the same time. Like all the previous times they’d enjoyed being together.

“No exceptions.” The manager shook his head. “Your choice.”

The charm hid somewhere within the walls of the theater. He sensed they were close, a niggling in his core like he hadn’t felt in a long time. He couldn’t leave without the charm. Leo clenched his jaw as he noticed Roxie’s curt nod indicating they should do as the manager insisted. If she could do it, then he’d have to man up. Be a true gentleman and keep his hands to himself. No matter what. If possible…

Award-winning author Betty Bolté is known for authentic and accurately researched historical fiction with heart and supernatural romance novels. A lifetime reader and writer, she’s worked as a secretary, freelance word processor, technical writer/editor, and author. She’s been published in essays, newspaper articles/columns, magazine articles, and nonfiction books but now enjoys crafting entertaining and informative fiction, especially stories that bring American history to life. She earned a Master’s Degree in English in 2008, emphasizing the study of literature and storytelling, and has judged numerous writing contests for both fiction and nonfiction. She lives in northern Alabama with her loving husband of more than 30 years. Her cat, Calliope, serves as her muse and writing partner, and her dog, Zola, makes sure she goes outside frequently. She loves to cook, travel, read, crochet and take long walks. She is a member of the Romance Writers of America, Historical Novel Society, Women’s Fiction Writers Association, Alabama Writers Conclave, and Authors Guild. Get to know her at www.bettybolte.com.