Plot Point: Agrarian Societies in Ireland, and the Release of “Lady Chandler’s Sister: Book 3 of the Twins’ Trilogy”

Who was Captain Rock? First, let’s begin with a quick overview, simply to set some parameters. “Captain Rock was a mythical Irish folk hero, and the name used for the agrarian rebel group he represented in the south-west of Ireland from 1821 – 1824. Arising following the harvest failures in 1816 and 1821, the drought in 1818 and the fever epidemic of 1816-19. Rockites, similar to the earlier Whiteboys, targeted the English and Anglo-Irish Feudal landowners. Captain Rock (or Rockites) were responsible for up to a thousand incidents of beatings, murder, arson and mutilation in the short time they were active. The rebel acts waning in 1824 with the return of “a bearable level of subsistence”. Captain Rock was the symbol for retaliation by “an underclass which had nothing left to lose”. Over this period and in subsequent years, well into the nineteenth century, threatening letters signed by “Captain Rock” (as well as other symbolic nicknames, such as “Captain Steel” or “Major Ribbon”) issued warnings of violent reprisals against landlords and their agents who tried to arbitrarily put up rents, collectors of tithes for the Protestant Church of Ireland, magistrates who tried to evict tenants, and informers who fingered out Rockites to the authorities.”

Agrarian societies had been active in Ireland as far back as the 1600s, but I became especially interested in those of the early 1800s, specifically those during 1820 – 1822, the time frame for my next novel, Lady Chandler’s Sister: Book 3 of the Twins’ Trilogy. One of the “bad guys” in book 2 of the Twins’ trilogy was an Irish baron, and the fate of Lord Kavanaugh was never decided. Therefore, in the final book of the trilogy, all loose ends must be addressed. That decision brought me to a closer study of the a character named “Captain Rock” and the Rockite movement.

Before I continue, I have a small confession to make regarding my style of writing. I am a “pantser,” meaning I do not outline or plan my book in detail before writing the book by the “seat of my pants.” Captain Rock is the perfect example of what I mean. In the early drafts of the book, I have my hero, Sir Alexander Chandler, remark about his countenance being similar to an Irish ancestor, Captain Dongal Rockwell Chandler, a pirate and a smuggler, and affectionately called “Captain Rock.” At the time, I was unaware a the history of the Irish Captain Rock and the Rockite movement, but just as I required a twist to my story, I stumble across multiple essays and books on the good (or is that bad) captain, and, miraculously, he was active in the same time frame as the book takes place. I would like to say this was an unusual occurrence, but as it has happened with nearly every book I have written (all 39 of them), I just sit back and wait for the muses to have their say. I manage to pull lots of weeds from my flower garden in the meantime.

Along with the Rockites there were movements like the “Whiteboys,” and the “Ribbonmen.” Irish Central tells us, “The Whiteboys were a secret Irish agrarian organization in 18th-century Ireland which took vigilante action to defend tenants’ land rights to subsistence farming. The group earned the moniker ‘Whiteboys’ due to their custom of wearing white smocks during their nightly raids. Some Irish immigrants who settled in the rural United States carried their rebellious spirit with them across the Atlantic, as a result of which ‘Whiteboy’ became a generic term for ‘rebel’ outside the cities. Back in Ireland, the Whiteboys usually referred to at the time as Levellers by the authorities, and by themselves as “Queen Sive Oultagh’s children”, “fairies”, “followers of Johanna Meskill” or “Sheila Meskill”, all symbolic figures supposed to lead the movement.

“The Whiteboys sought to address rack-rents, tithe collection, excessive priests’ dues, evictions, and other oppressive acts by landowners. Landlords and tithe collectors were their primary targets. The ‘boys ran a slick operation, priding themselves on extensive forward-planning and regular assemblies. Absolute loyalty was mandatory, and the Whiteboys were the first organization to invest the custom of swearing oaths with tremendous practical and symbolic importance. Whiteboy activism saw its first peak in County Limerick in 1761, quickly spreading to Tipperary, Cork, and Waterford. Initially activities focused only on specific grievances, and action was limited to leveling ditches that closed off common grazing land, and digging up ley lands and orchards.”

Ribbonmen or The Ribbon Society was principally an agrarian secret society, generally made up of rural Irish Catholics. The group came about in response to the miserable conditions placed upon tenant farmers and rural workers in the early 1820s. They meant to keep landlords from evicting tenants or raising rents. Ribbonmen also attacked tithe and process servers, and later evolved  the policy of Tenants’ Rights. The earliest notation of their existence was in 1817. Their name came from the green ribbon worn through the button-hole on a jacket or vest of its members. They were also known as the Sons of the Shamrock, the Patriotic Association, or the Fraternal Society. They supported the Catholic Association and the political separation of Ireland from Great Britain, along with their staunch support of tenants’ rights. Violent, and sometimes deadly clashes, occurred when the Ribbonmen came up against the Protestant  Orange Order in the North of Ireland. They specifically resisted paying tithes to the Protestant Church of Ireland. 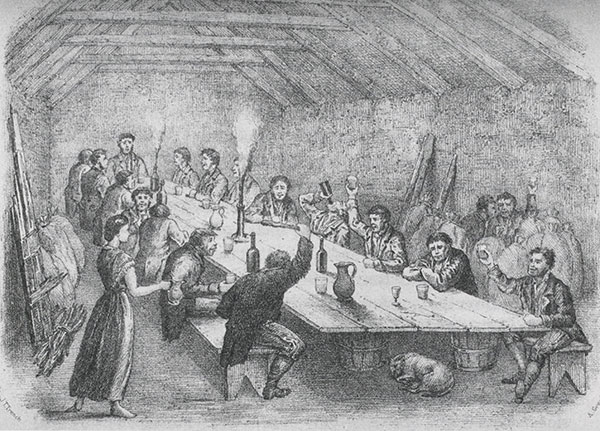 Above: A sketch of Ribbonmen drinking whiskey at a meeting in a barn on the marquis of Bath’s estate in County Monaghan in 1851, from William Steuart Trench’s Realities of Irish life (London, 1868) ~ https://www.historyireland.com/uncategorized/ribbonism/

There is more to tell on the Rockite movement, Captain Rock, Whiteboys, etc. I hope you will return here in the next couple of weeks for more on this fascinating history.

Captain Rock and the Irish Agrarian Rebellion of 1821-1824