Why Gretna Green? Marriage Over the Anvil, a Guest Post by Alexa Adams

This post originally appeared on Austen Authors on 23 February 2018. Enjoy!!

“I am going to Gretna Green, and if you cannot guess with who, I shall think you a simpleton, for there is but one man in the world I love, and he is an angel.” – Lydia Bennet, Pride and Prejudice 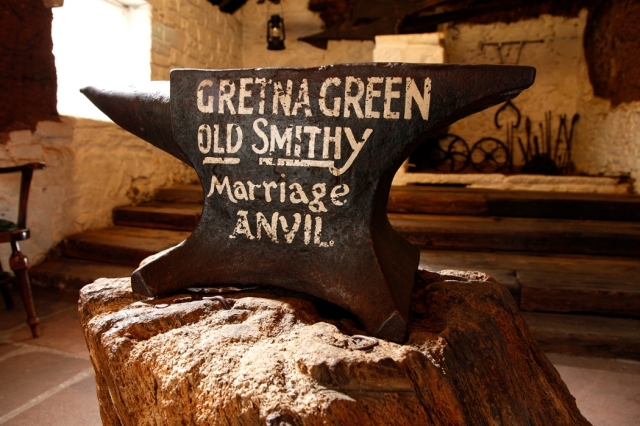 My little sister (who you may recall as the illustrator of Darcy in Wonderland) is getting married to a Scotsman on Monday! It will be just a civil ceremony in a Pennsylvania courthouse, necessary for immigration purposes, but they are planning a proper wedding (or at least a reception) near his home outside of Edinburgh once he has a visa. Thank goodness, as I am unable to travel yet post-baby (waiting on a passport). No less of an excuse could keep me away. I cried when I first learned I couldn’t be there.

As a result of this very exciting event, my thoughts have turned to Scottish marriages in Austen’s novels. Three of her books utilize the device of a Scottish elopement – Sense and Sensibility, Pride and Prejudice, and Mansfield Park – and it also receives mention in Love and Friendship:

“… Sophia and I experienced the satisfaction of seeing them depart for Gretna-Green, which they chose for the celebration of their Nuptials, in preference to any other place although it was at a considerable distance from Macdonald-Hall.” – Laura, Love and Friendship

Why Gretna? Anywhere in Scotland might do, and several other border towns were well known for performing runaway marriages. The Marriage Act of 1753, aimed at curtailing underage marriages as well as those contrived without parental consent, declared that the banns (an official wedding announcement) must be read on three consecutive Sundays during church services in the home parishes of both bride and groom. This gave anyone objecting to the marriage an opportunity to stop it. Faster marriages could take place by special license but only if the bride or groom were over twenty-one or had parental approval. So what’s your Regency Era Romeo and Juliet supposed to do? Make a run for the border, of course.

“We were within a few hours of eloping together for Scotland. The treachery, or the folly, of my cousin’s maid betrayed us. I was banished to the house of a relation far distant, and she was allowed no liberty, no society, no amusement, till my father’s point was gained.” – Colonel Brandon, Sense and Sensibility

It was called marriage over the anvil because Scottish wedding ceremonies did not have to be performed by a clergyman and often the first person available to perform a ceremony would be the local blacksmith, stationed in proximity to the coaching inn. Only two witnesses were required to make the marriage legal. The practice continued unabated until 1856 when Scottish law was changed to require a twenty-one day residency before a ceremony could take place.

“You may not have heard of the last blow–Julia’s elopement; she is gone to Scotland with Yates.” Lady Bertram, Mansfield Park

Gretna remains a popular wedding destination. Tourists flock to the old smithy to touch the historic anvil, which is supposed to convey luck in love. An elopement to Scotland sounds romantic, but as countless Regency heroines learned the hard way the flight for the border was necessarily uncomfortable. Still, the aura of romance persists. I’m really looking forward to my sister and new brother-in-law’s Scottish celebration. Kilts and whiskey are sure to abound.