The Theatre-Loving Fore-Runners of Shakespeare ~ Part I

Posted on November 3, 2017 by reginajeffers 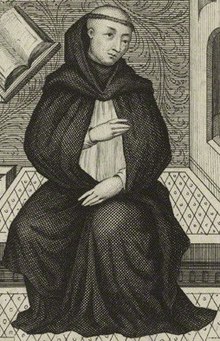 With the rediscovery of the works of Seneca, Plautus, and Terence, the renaissance of 16th Century England began. First edited in 1308 by an Nicholas Treveth, the tragedian Seneca remained unnoticed for some time by those in England, for Treveth resided in France at the time. Treveth was an Anglo-Norman chronicler, who was the author of a large number of theological and historical works and commentaries on the classics, more especially the works of Seneca. Many of these exist in MS form. in various libraries, but only two appear to have been printed, one being the work by which he is chiefly remembered, the chronicle of the Angevin kings of England; the other was the last twelve books of his commentary on St. Augustine’s treatise De civitate dei. The full title of the former work is Annales sex regum Angliae qui a comitibus Andegavensibus originem traxerunt, an important historical source for the period between 1135 and 1307, containing a specially valuable account of the reign of Edward I, who was his contemporary. (Nicholas Trivet)

Albertino, an Italian, had written an original verse play, using the Senecan model, in 1310. Albertino had been crowned with the laurel wreath for his efforts. This was followed by numerous rhymed dramas, with the most important of the time arriving in 1541 with the performance of Cinthio’s Orbecche, termed to be “the first regular tragedy in the vernacular produced on a modern European stage.” Orbecche is a tragedy written by Giovanni Battista Giraldi in 1541. It was the first modern tragedy written on classical principles, and along with Sperone Speroni‘s Canace, was responsible for a sixteenth-century theoretical debate on theater, especially with regards to decorum.  It was produced in Ferrara in 1541, with incidental music composed by Alfonso della Vivuola and sets by the painter Girolamo da Carpi. Ercole II d’Este was present at the premiere, which took place at the playwright’s house. The play was printed in 1543, with several additions for the reader’s benefit. Though the play followed Aristotelian principles in terms of structure, thematically it was Senecan, featuring vengeance, rage, hate, and the depiction of violence. (Orbecche) [Note: Shakespeareʹs primary source for Othello and for Measure for Measure was a story in Giraldi Cinthioʹs Gil Hecatommithi, which was published in 1565. ~ For more on the similarities, please go to this piece from the British Library. For an 1855 translation, please go HERE.]

France was also writing classical plays before the English, but their insistence upon unity of action and upon long choral lyrics did not appeal to the English.

The Italians were also the first to explore Comedy. Petrarch wrote Philologia in 1331. He based it upon the work of Terence. The period of neo-Latin imitations began in seriousness in 1427 with the recovery of 12 lost plays by Plautus. By 1521, Henry VIII provided his guests with a Plautus comedy. Even English themes were turned into performances in Latin. Thomas Legge‘s Richard Tertius Tragedia, a play based on the life of Richard III, was performed at Cambridge around 1580.

Before the time of Shakespeare, the English drama was either a comedy, a tragedy, or a chronicle/historical play. In truth, the three types overlapped. A tragedy might have historical elements and might use comedy as a relief of tension in the action. There were also equally arbitrary subdivisions of romance, classics, satire, etc.

The historical chronicle play was the most distinctive of the early English plays in form and subject matter. The comedy found within this early attempts was based on the comedy of the old sacred scripts. They presented both real and mythical national heroes. The chronicle and the morality plays were often blended together. For example, “Bishop John Bale in 1538 vigorously distorted history to defy the Pope of Rome in his King John. In a a sense this play is not a chronicle, for its purpose was decidedly more polemical than historical. Yet Bale presents actual historical figures on the stage, although in peculiar fashion. Only King John is a person throughout. The others begin as abstractions, but near the end of the first of the two acts Sedition assumes the name of Stephen Langton, Usurped Power becomes the Pope and other abstractions take historical names.” [Parks, Edd Winfield and Richmond Croom Beatty, The English Drama 900 – 1642, New York, W. W. Norton, 1963, 99.] As one can easily observe, Bale was an English clergyman, historian, and controversialist, and Bishop of Ossory. He wrote the oldest historical verse drama [King John] and developed and published a very extensive list of the works of English authors down to his own time, just as monastic libraries were being dispersed. His unhappy disposition and habit of quarreling with authorities earned him the nickname of “bilious Bale.” (John Bale)

Over 150 chronicle-style plays were produced between the late 1500s and the first decade of the 1600s. These were plays of national pride, ones designed to appeal to the audience, but not ones of historical accuracy. To Elizabethans, this was a cause to know shame at the general populace. Dramatists employed such resources as Stowe‘s Chronicles of England (1585) and Holinshed‘s Chronicles of England, Scotland, and Ireland (1577). Shakespeare is thought to have used Holinshed’s Chronicles as the source for the majority of history plays, most notably for Macbeth, King Lear, and Cymbeline. Christopher Marlowe is also credited with the use of Chronicles from Holinshed.

According to Winfield and Beatty (p99-100), “The first important chronicle play was The Famous Victories of Henry V, first acted about 1580. The play may have been written by the actor Richard Tarlton; certainly, as Derick the clown, he made the play almost entirely his own until his death in 1588. The Famous Victories has no Falstaff, but it has many comic incidents which Shakespeare used to advantage in Henry IV. Soon after 1585 the stage became crowded with these plays: only John Lyly, of all the prominent playwrights who preceded Shakespeare, escaped association with them. In the hands of these diverse dramatists, the chronicle broke up into several forms: strictly historical, legendary, pseudo-historical, etc. They might be tragic or comic. Thus Marlowe’s Edward II or Shakespeare’s Henry V is reasonably authentic, with the first tragic and the second a comedy; but Shakespeare’s King Lear is so little historical that it is commonly regarded as a tragedy rather than a chronicle. Good examples of pseudo-historical are Robert Greene‘s Scottish History of James IV and Friar Bacon and Friar Bungay, in which the author employs historical figures without the slightest regard for historical accuracy.

Established dramatists without hesitation reworked the older and cruder plays, as Shakespeare did the Famous Victories  and the anonymous King Lear (usually assigned to the early 1580s). Many other plays which have survived seem possible re-workings of old plays by several different men, with the authors so completely confused that to unravel the tangle seemed hopeless. The classic example of this is the Henry VI trilogy usually reprinted in Shakespeare’s works. There was an earlier play; either in this earlier form or in the final version of Thomas Lodge, Robert Greene, George Peele, Henry Chettle, Thomas Kyd, Christopher Marlowe, William Shakespeare, and some others; and very plausible reasons can be given for each man named. The historic play was a medium which was new and fluid, with few rules or few examples to follow. As a rule, the best plays are by single dramatists who imposed upon this loose form a certain unity of personality, if not of action. The history borrowed many of the characteristics of the epic. In this form it held an amazing popularity throughout the reign of Elizabeth I. Even Ben Jonson wrote a romantic tragedy of this type, his lost Richard Crookback, before he turned to classical tragedy, and he experimented with an English subject cast in the strictest classical mold in the fragmentary Mortimer His Fall (1602). Shakespeare’s successors were less attracted by the chronicle, although Fletcher, Webster, Heywood, Rowley, and many another wrote such plays. Only John Ford‘s Perkin Warbeck was outstandingly successful. Apparently, soon after the accession of James I, the national spirit lost its high and unified nature; as it ebbed and broke into diverse streams, the chronicle play, of great national deeds and heroes gradually became less popular. Long before the close of the theatres in 1642, it had practically been abandoned by the playwrights.