Posted on November 1, 2017 by Regina Jeffers

One of my MOST favorite movies is Seven Brides for Seven Brothers. I always dearly loved Howard Keel, and Jane Powell was the perfect foil for his Alpha male persona in the film. There is one song sequence in which Jane Powell, as Milly, teaches the six younger brothers the protocol of “Goin’ Courtin’.”

Goin’ courtin’, goin’ courtin’
Oh it sets your senses in a whirl.
Goin’ courtin’, goin’ courtin’
Dudin’ up to go and see your gal.
Oh, it’s fun to hunt and shoot a gun,
Or to catch a rabbit on the run
But you’ll find it’s twice as sportin’ goin’ courtin’.
Now there’s lots o’ things you gotta know
Be sure the parlor light is low
Y’ sidle up and squeeze her hand
Let me tell you fella’s that is grand.
You hem and haw a little while
She gives you kinda half a smile.
You cuddle up she moves away
Then the strategy comes into play.

But what of “courting” in the Regency Period?

Society during the Regency era expected strict propriety from its young people. Sometimes the rules were strict and unreasonable, but somehow the youth of Jane Austen’s time managed to come together.

Young men of the time were often older than the women they courted. Men were expected to establish themselves before seeking a wife. They were expected to have sound financial prospects, especially if they were not the eldest son and expected to inherit the family property. Men often sought wives straight from the schoolroom, meaning ages 16 and 17 because childbirth was difficult for a woman of the era. (One must remember that the average was eight pregnancy during the woman’s lifetime. Naturally, not all were births because of the poor medical conditions.) It was thought that a younger wife could withstand those difficulties more easily than a “woman on the shelf” (women of 25+ years of age). An heir and a spare was expected of the marriage. In addition, the women of the gentry and the aristocracy were expected to secure her financial future with her marriage, for she had few other options than to marry. Control of their lives were transferred from their fathers/guardians to their husbands.

It is the standard belief, especially in romance novel set in the Regency, that at age 16 a girl of the gentry made her Come Out, which was a formal introduction of the girl to Society. In truth, it was customarily between age 16 and 18. Depending on the number of sisters waiting to be presented in their own turn, the timing of the girl’s appearance in Society could vary. The “Come Out” was the “signal” that she was prepared to become a bride. New dresses and jewelry and riding habits, etc., were required for the young lady’s debut. She would be “on display” at all times, and people would be evaluating her elegance and manners. The Season in London involved balls, soirees, the theatre, assemblies, trips to the museum, and a long list of places to see and be seen. During this period, the young lady could finally participate in conversation with adults and her suitors. I often wonder of the thrusting of young ladies into a world in which they had little experience. The men were permitted their sowing of the their oats, but women were held in check.

In Jane Austen’s Pride and Prejudice, Lady Catherine De Bourgh is flabbergasted by the news that all five Bennet sisters are Out at the same time “The younger ones out before the elder are married!” Of course, Elizabeth Bennet defends her mother’s lax sense of propriety by saying, “I think it would be very hard upon younger sisters, that they shouldn’t have their share of society and amusement because the elder may not have the means or inclination to marry early.” It was not impossible to have more than one daughter Out at the same time, but the expense of doing so was an issue. The expense of multiple daughters out at the same time could have been staggering to a man such as Mr. Bennet. When Charlotte Lucas finally marries at age 27, her sisters her happy because “hopes of coming out a year or two sooner than they might otherwise have done” arise. Younger sisters often had to wait for the older to become engaged or married before they would be permitted an appearance in Society.

A young lady making her debut not only required a financial outlay, but a strategic plan, so to speak. A bevy of connections were necessary in order to receive the proper invitations to the most Town-worthy events. It was quite a coup to be seen at the best events, and a girl required numerous relations and acquaintances aiding her success, not to mention fashionable clothes, subscriptions to balls, tickets to the theatre, a carriage, etc. 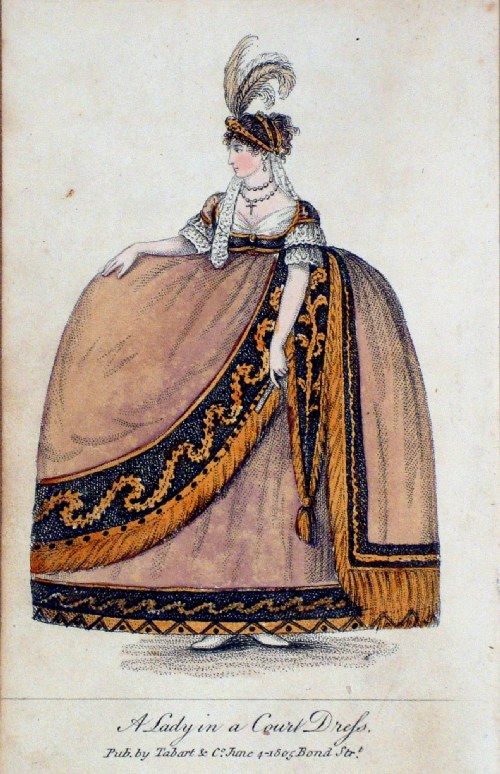 Girls of the aristocracy would likely come to London during the Season (which varied somewhat depending upon when Parliament was in session). A ball in her honor would be on the agenda, as well as a Presentation at Court, which required a sponsor and expensive gown, which was regulated by Queen Charlotte. “Female gowns worn at court during the Regency era looked ungainly. Instead of the lovely columnar silhouette of the Grecian-inspired draped gown, court gowns at this time made their wearers resemble the upper half of an extravagantly decorated apple or a pregnant cake topper. These custom creations, made with sumptuously expensive materials, adhered to the rules laid down by Queen Charlotte, who presided over the royal drawing rooms until her death.Earlier Georgian gowns flattered a lady’s waist, with corsets that made the waist seem miniscule. As waists rose, the silhouette of the gowns became grotesque, swallowing a lady’s figure in a ball of fabric.” (Awkward! The Regency Court Gown)

After receiving the Queen’s notice, the young woman’s could receive a proper gentleman caller. Society would welcome them into their outstretched arms. This would include girls like Miss Georgiana Darcy and Miss Anne de Bourgh (had her health allowed of course.)

Girls of the gentry, who did not expect a Season in London, could perhaps lay claim to a ball or an evening of entertainment dedicated to her Come Out. In Jane Austen’s Mansfield Park, Fanny Price’s uncle held a ball in her honor marking her coming out. These events were designed to show off the girl to potential suitors. Aunt Phillips likely had the idea of her invitation to supper for Mr. Wickham and Captain Denney being a stepping stone in placing the Bennet sisters before the gentlemen. Sometimes the event was more of a public nature as was the Meryton Assembly in Pride and Prejudice. Mrs. Bennet was determined to place Jane before Mr. Bingley, for the man was said to be wealthy. If Jane could be place thusly, then her eldest daughter’s marriage could place the other four girls in the path of equally rich gentlemen.

A proper young lady was to have a chaperone in tow at all times. Often, a chaperone traveled with the husband and his new bride on their “honeymoon.” Eligible gentlemen were only to give their attentions to the young ladies who had made their Society debut. A young woman who was Out could engage in conversation with eligible gentlemen, could attend formal dances and social outings, and could walk out with a gentleman, if she was properly chaperoned. Girls, who were not Out, could not engage in conversation until a parent or other familial adult asked her a question. She could only walk out with a male relative (again with a chaperone). Many girls wore what is known as a “close bonnet.” This was a hat with a deep brim, which hid most of the girl’s countenance from view. She was not to be “seen” until the proper time of her Come Out.

Tom Bertram in Austen’s Mansfield Park relates a story of a young lady who did not practice decorum. The girl approached Tom at a party, claiming him an acquaintance and “talked and laughed till [he] did not know which way to look.” In sharp contrast is the novel’s heroine, Fanny Price. At Fanny’s Come Out, the guests note that Fanny is “attractive…modest…Sir Thomas’s niece…and soon to be admired by Mr. Crawford. It was enough to give her general favour.”

You will notice I have said nothing about “LOVE.” That was not part of the equation. A match that would benefit both the male and the female was all that mattered. If affection became part of the arrangement, then the situation was blessed. Those of the lower gentry and the working class would have more options revolving romance in the marriage.