Most of you are likely to think a “cook’s tour” has something to do with a chef’s culinary excellence, but the phrase actually has its roots in the world’s oldest and largest travel organization. 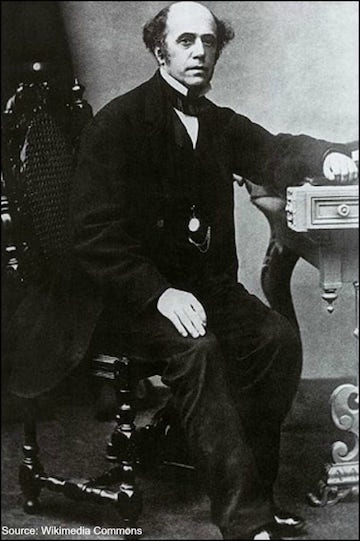 Thomas Cook was a 32-year old cabinet maker by trade and a strong proponent of the temperance movement. One day in June 1841, he walked from his home in Market Harborough to the nearby town of Leicester to attend a “dry” meeting. A former Baptist preacher, Thomas Cook was a religious man who believed that most Victorian social problems were related to alcohol and that the lives of working people would be greatly improved if they drank less and became better educated. On the way, he passed a billboard poster announcing that the Midlands County Railway had opened a rail extension between Loughborough and Leicester. Thomas concocted an idea that the steam engine could be profitably harnessed to the temperance cause; therefore, he persuaded the railroad company to reduce the fare in return to his guarantee of 500 passengers to travel the newly opened rail extension, which customarily served only one-tenth that number.

At the meeting, Thomas suggested that a special train be engaged to carry the temperance supporters of Leicester to a meeting in Loughborough about four weeks later. The proposal was received with such enthusiasm that, on the following day, Thomas submitted his idea to the secretary of the Midland Railway Company. A train was subsequently arranged, and on 5 July 1841, 570 passengers were conveyed in open carriages the enormous distance of 12 miles and back for a shilling. [Some sources say the cost was 14 cents for a round-trip of 48 miles.] The day was a great success and, as Thomas later recorded, ‘thus was struck the keynote of my excursions, and the social idea grew upon me’.

Other societies soon solicited the travel “guide” to arrange their excursions. During the next three summers Thomas arranged a succession of trips between Leicester, Nottingham, Derby and Birmingham on behalf of local temperance societies and Sunday schools. He even organized tours to the “wilds” of Scotland. Within these limits many thousands of people experienced rail travel for the first time, and Thomas was able to lay the foundations of his future business. He later described this period as one of ‘enthusiastic philanthropy’ since, beyond the printing of posters and handbills, he had no financial interest in any of these early excursions.

Thomas Cook’s first commercial venture took place in the summer of 1845, when he organised a trip to Liverpool. This was a far more ambitious project than anything he had previously attempted, and he made his preparations with great thoroughness. Not content with simply providing tickets at low prices – 15 shillings for first-class passengers and 10 shillings for second. Thomas also investigated the route and published a handbook of the journey. This 60-page booklet was a forerunner of the modern holiday brochure.

By the end of 1850, having already visited Wales, Scotland and Ireland, Thomas Cook began to contemplate foreign trips to Europe, the United States and the Holy Land. Such thoughts had to be postponed, however, when Sir Joseph Paxton, architect of the Crystal Palace, persuaded Thomas to devote himself to bringing workers from Yorkshire and the Midlands to London for the Great Exhibition of 1851. This he did with great enthusiasm, rarely spending a night at home between June and October, and he even produced a newspaper, Cook’s Exhibition Herald and Excursion Advertiser, in order to promote his tours. By the end of the season Thomas had taken 165,000 people to London, his final trains to the Exhibition carrying 3,000 children from Leicester, Nottingham and Derby.

Thomas continued to expand his business in Britain, but he was determined to develop it in Europe too. In 1855 an International Exhibition was held in Paris for the first time and Thomas seized this opportunity by trying to persuade the companies commanding the Channel traffic to allow him concessions. They refused to work with him, however, and the only route he was able to use was the one between Harwich and Antwerp. This opened up the way for a grand circular tour to include Brussels, Cologne, the Rhine, Heidelberg, Baden-Baden, Strasbourg and Paris, returning to London via Le Havre or Dieppe. By this route, during the summer of 1855, Thomas escorted his first tourists to Europe.

In those days, a visit to a foreign country was a major undertaking. Crowds of relatives would gather to see their relatives off. Cook’s “tour escorts” led the adventure-minded little groups through strange places and gave a running commentary on every town, statue, etc. The descriptions presented to the “tourists” even became famous. Cook’s fame rose quickly. Therefore, to take any type of pleasure journey was the same as saying you were going on a “Cook’s tour.” 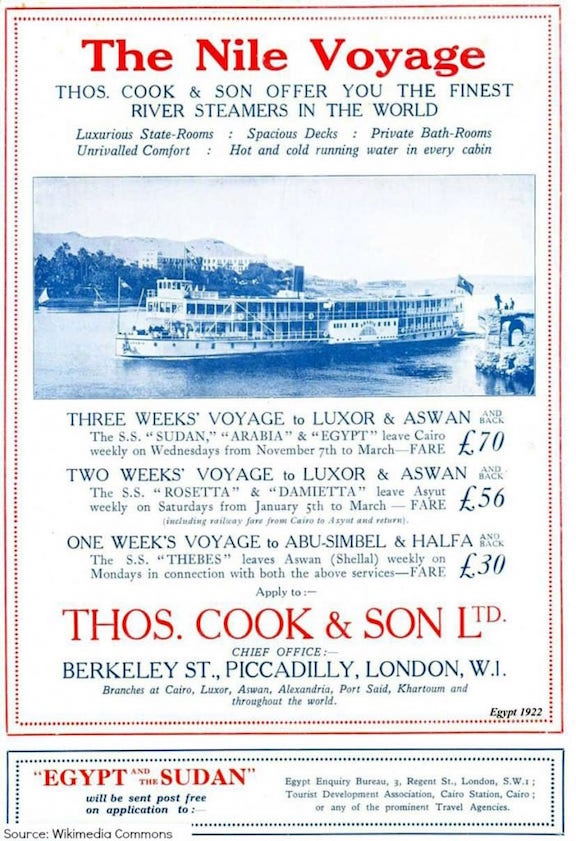 4 Responses to Ever Been on a “Cook’s Tour”?