Posted on December 7, 2016 by reginajeffers

First made by Dom Bernardo Vincelli, a herbalist monk of the Order of St. Benedict, Bénédictine came into being in the Sixteenth Century. Vincelli devoted his life to the study of curative herbs and plants. The area surrounding the Abbey at Fécamp was fertile and herbs were plentiful, for it was part of the Caux district near the sea. The Pays de Caux is an area in Normandy occupying the greater part of the French département of Seine Maritime in Haute-Normandie. It is a chalk plateau to the north of the Seine Estuary. Vincelli used them to concoct his various balms and cordials, including the Elixir Bénédictin. 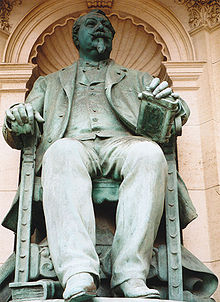 The recipe for the elixir was kept in a safe place within the Abbey. During the Revolution of 1789, monasteries were destroyed and monks were driven from their orders. Fécamp was set afire, but not before the monks placed certain jewels, tapestries, and archives in the care of trusted townsmen. Therefore, in 1862, M. Alexandre Le Grand inherited many of the old manuscripts from ancestors within the local town. Le Grand was a simple merchant before that time. Among those manuscripts was the one from Dom Vincelli, which listed the 18 ingredients for Elixir Bénédictin. However, Le Grand’s fortune was not made immediately for the document did not describe how the plants were treated and processed or the precise amounts and order of the mixture.

It became Le Grand’s purpose to learn more of the plants and experiment with the combinations. He used the Abbey’s long-hidden manuscripts as his guide. It took him a year of relentless experimenting to claim what he termed as the “exact essence” of the elixir. The fame of Benedictine grew rapidly, and within three years Le Grand had a substantial business. He had buildings constructed in the Renaissance style in which to manufacture the elixir. One of the larger building was one called Abbot’s Hall. At its end, one can view a large stained glass window commemorating the visit of Francois the 1st, King of France, to the Abbey of Fécamp in 1534. It was on this visit that the French monarch declared Vincelli’s liqueur’s excellence. “By my faith, never have I tasted better.”

Others say that Alexandre Le Grand invented the recipe himself, helped by a local chemist, and he told this story to connect the liqueur with the city history to increase sales. [According to an interview of Alain Le Grand, last family owner of the distillery in the TV-Document Le Palais bénédictine de Fécamp on FR3 – Normandie.] He began production under the trade name “Bénédictine”, using a bottle with an easily recognizable shape and label. The family eventually sold the company to Martini and Rossi, which was in turn bought by Bacardi.

The recipe is a closely guarded trade secret, purportedly known to only three people at any given time. So many people have tried to reproduce it that the company maintains on its grounds in Fécamp a “Hall of Counterfeits” (Salle des Contrefaçons). The bottle and label have been imitated, as has the name Bénédictine. The company prosecutes those it feels are infringing on its intellectual property.

Every bottle of Bénédictine has the initials D.O.M. on the label, which stands for “Deo Optimo Maximo” (“To God, most good, most great”). This abbreviation is commonly used at the beginning of documents of the Benedictine Order as a short dedication of the work.

HOW YOU SHOULD DRINK BÉNÉDICTINE