Posted on December 3, 2015 by reginajeffers 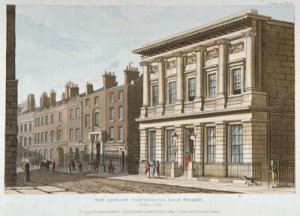 Mincing Lane is one of the smaller streets in the City of London. It links Fenchurch Street to Great Tower Street. For many years, Mincing Lane was “the world’s leading centre for tea and spice trading after the British East India Company successfully took over all trading ports from the Dutch East India Company in 1799. It was the centre of the British opium business (comprising 90% of all transactions), as well as other drugs in the 18th century. Businesses in the British slave trade…were also based in Mincing Lane. In 1834, when the East India Company ceased to be a commercial enterprise, and tea became a ‘free trade’ commodity, tea auctions were held in the London Commercial Salerooms on Mincing Lane. Teas merchants established offices in and around the street, earning it the name ‘Street of Tea.'” (Mincing Lane)

The Commercial Salerooms is on the east side of Mincing Lane. The Commercial Salerooms are two stories. The lower rise display six attached Ionic columns supporting a continued entablature. Between the columns are large square-headed windows, above which are relievo’s in pannels by James George Bubb. The centre sports Britannia. On either side are emblems representing colonial produce, commerce, navigation, and science. (Thomas Allen, The Histroy and Antiquities of London, Westminister, Southwark, and Parts Adjacent , Volume 3, page 749)

The Great Fire of 1666 burnt down The Royal Exchange. Afterwards a myriad of coffee houses took over the area. For the following 100 years, time and neglect saw the demise of these establishments. Garroway’s, which was the last of these to fall. It succumbed in 1860. Auctions of many commodities occurred in the buildings until they were transferred to the London Commercial Salerooms, which opened in 1811. These were destroyed by the bombing in 1941.

The London Commercial Salerooms were the model for traditional commodity trading. These establishments saw the progress that would change the world of commodity exchange: the development of steamships and railways; international postal services; the opening of the Suez Canal, and the invention of the telegraph. (Richard Duncan, Agricultural Futures and Options: A Guide to Using North American and European Markets, page 86 )

On Mark Lane the corn-factor sold the corn of the country farmer to the miller, the meal man, and to the corn-chandler of London. The Corn Exchange is located on the east side of Mark Lane. Originally, “the farmers of Kent and Essex used to send their grain up the river, and attend a sort of market at Bear Quay; but…when grain was cheap, the farmers often returned home without selling their grain. Those from Essex used the Bull inn, Whitechapel; and the landlord, who was of an enterprising spirit, proposed that the samples, with the prices, be left with him, in order that he might try to dispose of the grain in their absence. This man, whose name was Johnson, and who was originally the ‘boots’ of the inn, soon got so much business in this way, that he opened an office at Bear Quay as a corn factor, and amassed a fortune.” (The History and Antiquities of London, Westminister, Southwark, and Adjacent Parts)

The business get so quickly that the Corn Exchange was open on Mark-lane. The building is of the Doric order. There is a large, spacious room set aside for the display of grain samples. Across from this structure, one can find the smaller, The New Exchange for Corn and Seed. 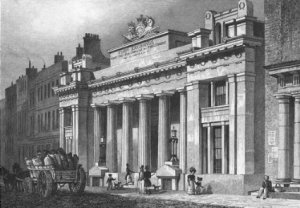 “The principal facade ranges with the houses on the east side of Mark-lane; it is made into a centre between two wings. The former consists of a portico or corridor composed of six fluted Doric columns from Grecian examples, raised on a continued plinth, and sustaining an entablature. The plinth is broken with three flights of steps, and two low windows, entrances to the vaults beneath the floor; in the entablature the triglyphs are omitted, and their place supplied by chaplets of wheat-ears instead of myrtle…. The cornice is charged with lion’s heads at intervals, and the whole is surmounted by a blocking course; above the centre is a large pedestal crowned with a cornice, abode which are the royal arms in stone, accompanied by ploughs and agricultural emblems. On the dado is inscribed

(The History and Antiquities of London, Westminister, Southwark, and Adjacent Parts)

2 Responses to Georgian Architecture: Mincing Lane, The Commercial Salerooms, and The Corn Exchange