Today, I welcome fellow Regency romance author, Vikki Vaught and her latest release, book one of her Honorable Rogue series. Vikki is a fellow Southerner, living in Tennessee. She has a tempting excerpt below.

I want to thank Regina for having me on her blog. I’m very exciting about my new release, Lady Overton’s Perilous Journey. This is the first book in my Honorable Rogue series. The story is set in early 19th century England & America, and I loved delving into a bit of American history for my novel. I’d like to discuss some of the fascinating research I did for my book.

I originally set this story in 1809, but after further research I discovered Thomas Jefferson convinced the U.S.  Congress to pass the Embargo Act of 1807, which stopped foreign trade. While Jefferson did not want to involve the U.S. in the conflict between France and England, he needed to put financial sanctions in place that could possibly hurt these countries economically. This act devastated the U.S. economy. American ships literally remained in port rotting in the harbors. Illegal trade became the only means of getting goods from foreign shores. Many of the items needed by Americans were brought in through Canada and prices sky-rocketed.

Here is some background history that led up to the embargo. Britain and France resumed their war in 1803, causing relations to become strained between any countries deciding to remain neutral. In 1806, France passed a law against trading with neutral countries, and since America did not take sides in the conflict between the two countries, the French began plundering U.S. ships. In 1807, Britain passed a bill prohibiting trade between France and neutral countries. The Royal Navy began waylaying American vessels and demanded that the ships pull into their ports before they were allowed to trade with other countries.

The British also started boarding American vessels and began seizing sailors they deemed were deserters from the Royal Navy. This infuriated the U.S. and thousands of American sailors were unlawfully impressed into serving on British ships, leaving destitute families behind.

During the last sixteen days of Jefferson’s presidency, a bill was passed replacing the Embargo Act with the Non-Intercourse Act of 1809. While this act opened up trade again, it did not allow trade with Britain. Since my story has my heroine fleeing England on an American vessel, I needed to move it to a different year, prior to the escalating issues between the two countries. Since 1802 was the only year that England and France were not at war for more than twenty years, I decided to place my story in that year.

This was by no means the only research I did for Lady Overton’s Perilous Journey, but was certainly the most important. While this is a novel of fiction, I wanted to ensure that the happenings within the story were possible.

I hope you’ll enjoy the romance between Alex and Anissa as much as I enjoyed writing their love story. Happy reading! 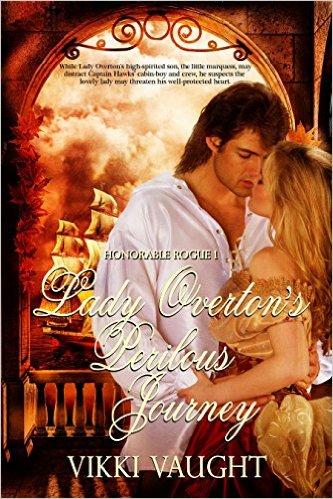 When her son’s life is threatened, Lady Overton seeks a vessel bound for America. Before the ship even reaches the high seas, sparks fly between her and Captain Alex Hawks. Although the young widow may be lonely and afraid, she cannot risk the diversion a romantic entanglement could bring, no matter how much she wants to lose herself in the captain’s embrace.

The Captain vows to protect the little marquess, but can offer no assurance that the marchioness will leave his ship with her virtue intact. Alex is drawn to Anissa’s beauty and courage. How long can he fight a losing battle before he surrenders and makes her his own?

Will Alex be able to keep this remarkable woman and her child safe? Will his passion for Anissa be enough or will their differences keep them apart?

Author Bio:
Vikki Vaught started her writing career when a story invaded her mind and would not leave.
Over the last few years, she has written more than a half dozen historical romances and is presently working on Book 2 in her Honorable Rogue series. Her new release, Lady Overton’s Perilous Journey, is the first book in the series.

Vikki loves a “Happily Ever After”, and she writes them in her stories. While romance is the central theme of all her books, she includes some significant historical event or place in all her novels.

For the last decade, Vikki has lived in the beautiful foothills of the Smoky Mountains of Tennessee with her beloved husband, Jim, who is the most tolerant man in the world for putting up with her when she is in a writing frenzy. When she is not writing or working her day job, you’ll find her curled up in a comfortable chair reading her Kindle, lost in a good book with a cup of coffee at her side.

Excerpt:
She cuddled her sleeping child close as she scanned the common area. Her insides churned as she wove her way through the crowded tables, the chairs filled with dirty, unsavory-looking men. The strong smell of sweat mingled with ale threatened to turn her stomach and had her breathing through her mouth.
Anissa approached the man the stable boy described. “Sir, are you Captain Hawks?”

He turned around, and in a drawling voice, he answered, “Well, darlin’, that’s my name.”

He swept his tri-corn hat from his head, stood and bowed.

“Captain Alex Hawks, at your service. What can I do for you?”

Anissa gazed up into the blackest eyes she had ever seen and wanted to fall into them. Mesmerized, she blinked as a shiver ran across her shoulders. This was not the time to notice this man’s eyes, no matter how compelling they were. Now was the time to use her charms to convince him to take her on his ship.

“My name is—” she quickly searched for a name, not wanting to give him her identity, “—Mrs. Carlson. I would like to pay for passage on your ship. I understand you are leaving for America this morning.” Then, thinking of a city she had heard of in America, she added, “I need to go to Boston, where some of my family lives. Would you be able to help me?”

Captain Hawks gave her an appraising stare, which unnerved her. This man was intimidating, to say the least. “I’m not going to Boston. And, I don’t normally take on passengers. I’m headed to Baltimore, and it’s a far piece from Boston, darlin’.”

“Please take me. I have to leave for America as soon as possible.” Anissa had to convince him to allow her passage. “And as far as your destination is concerned, I’m sure once I am in America, I shall be able to travel to Boston from there.”

“Darlin’, do you even know where Baltimore is and how far it is from Boston?”

Anissa wished he would quit calling her darling. It was quite presumptuous of him, and she did not appreciate it at all. Of course, she did not want to anger him, so she kept her feelings to herself. “Well, no, not really. How far is it?”

“It’s over four hundred miles,” Captain Hawks explained, as if he were speaking to a child, which further irritated her, tugging at her frazzled nerves. “You would be better served if you found a passenger ship going there. I have an associate who should be arriving in a few days, and his ship is going to Boston. He also takes passengers. I’m sure he would be happy to take you on board.”

Oh, dear, why did I say Boston? Please, Lord, let me convince him to take me.
Every hour brought her closer to the chance of discovery. She could not afford to wait for another ship. She needed to get as far away from Lord Howard as possible, immediately.

“Captain, I do not have a few days to wait. My uncle is dreadfully ill. He may only have a few months to live, so I need to leave right away. Please allow me to travel on your ship.” She looked up at him, willing a few tears into her eyes, praying to gain his sympathy.

Captain Hawks sighed and rolled his obsidian eyes toward the ceiling. “I know I’m going to regret this. All right, darlin’, if it’s that important, I’ll take you. I hope you realize how uncomfortable this voyage will be for you and the child. The cabin you will be in barely has room to turn around in. Are you sure you don’t want to reconsider?”

“We shall be fine, regardless of the conditions.”

He shook his head, sending her heart to the floor.

Oh, Lord, please don’t let him change his mind. What shall I do if he has?