Northanger Horrid Novels ~ Are They Real?

I have highlighted these books previously, but at a recent event, I was again asked if Austen made up the names of the books in Northanger Abbey. So, I will again  introduce our visitors to what are known as the Northanger Horrid Novels, seven early Gothic examples of fiction.

These books were among the many published by Minerva Press in the late 1700s and early 1800s. William Lane established Minerva Press at No. 33 Leadenhall Street, London, when he moved his circulating library there in 1790. The seven books, which comprise the Northanger Horrid Novels, were once thought to be creations of Jane Austen’s imagination, but research in the early 1900s by Michael Sadleir and Montague Summers proved the stories did exist. In Northanger Abbey, Isabella Thorpe tells Catherine Morland …

“Dear creature! How much I am obliged to you; and when you have finished Udolpho, we will read The Italian together; and I have made out a list of ten or twelve more of the same kind for you.”
“Have you, indeed! How glad I am! – What are they all?”
“I will read you their names directly; here they are, in my pocket-book. Castle of Wolfenbach, Clermont, Mysterious Warnings, Necromancer of the Black Forest, Midnight Bell, Orphan of the Rhine, and Horrid Mysteries. Those will last us some time.”
“Yes, pretty well; but are they all horrid, are you sure they are all horrid?”
“Yes, quite sure; for a particular friend of mine, a Miss Andrews, a sweet girl, one of the sweetest creatures in the world, has read every one of them.”

Some years back, Valancourt Books began a project to bring these titles and many others from around the world to the reading public. Along with those found on Valancourt, most of the titles are available from online book sources. Some are even available in their entirety at internet reading sites. So, what are the stories in each of these books? And would Jane Austen have read them?

The Castle of Wolfenbach (1793 )by Eliza Parsons
A lecherous and incestuous uncle forces Matilda Weimar to flee her home and to seek refuge in the ancient Castle of Wolfenbach. Horrifying mysteries also dwell in the castle, including that of the missing Countess of Wolfenbach. Matilda must unravel the clues before her uncle tracks her down and takes her away with him.

The Mysterious Warning (1796) by Eliza Parsons

When the much revered Count Renaud dies, his degenerate heir, Rhodophil, assumes his father’s title. The count has disowned his son Ferdinand, who has married without his father’s permission. Rhodophil swears he will share his riches with Ferdinand and the younger brother’s wife, Claudina, but a “mysterious warning” from the grave sends Ferdinand fleeing for his life. To make matters worse, Claudina has aligned herself with Rhodophil. Ferdinand’s quest for his own fortune and adventure brings him to the doorstep of a recluse, who has a horrible secret. Later, he becomes imprisoned by the Turkish army and then encounters one of Gothic literature’s most depraved female characters, Fatima. If he survives all his meanderings, Ferdinand must then return to Renaud Castle to uncover the ghostly truth about his wife and his brother. 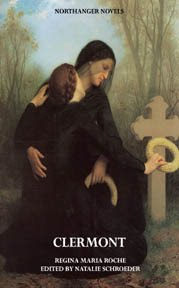 Clermont (1798) by Regina Maria Roche
Madeline lives in seclusion with her father Clermont, who holds a mysterious past. That seclusion is interrupted by one of Clermont’s former friends, a Countess. Madeline is allowed to reside with the Countess, with whom she will receive an education. However, the Countess is attacked by unknown assailants, and Madeline is assaulted in a ghostly crypt. Compounding their problems, a sinister stranger appears to claim Madeline as his bride. The stranger knows Clermont’s secret and threatens to ruin Madeline’s father. Madeline must avoid her pursuers, solve the mystery of her father’s past, and win the love of De Sevignie.
The Orphan of the Rhine (1798) by Eleanor Sleath

Sleath is very much an Ann Radcliffe wannabe, and she models many of her pieces on Radcliffe’s works, using several of Radcliffe’s signature plot devices: mysterious monks, ruined towers, assumed names for the characters, last-minute rescues, and death-bed scenes. In this novel, Julie de Rubine discovers that her marriage to the Marchese de Montferrat is a sham. Unfortunately, this news is not delivered until after Julie gives birth. Julie takes her child and an orphan by the name of Laurette to live in a half-ruined castle on the Rhine. She remains there under the Marchese’s threats until Laurette becomes old enough to “stir the passion” of other key characters. Then things get very interesting!

The Necromancer; or, The Tale of the Black Forest (1794) by Karl Friedrich Kahlert
This book is a series of interconnected stories, each of which deals with the enigmatic character Volkert the Necromancer. This is a very strange novel. It is filled with murder, dark magic, and plenty of ghosts. The plot takes too many twists and turns to describe in so short of a space, but for the true Gothic fan, it is a must.
The Midnight Bell: A German Story, Founded on Incidents in Real Life( 1798) by Francis Lathom

Alphonsus Cohenburg finds his mother covered in blood. She tells him that his uncle has murdered Alphonsus’s father, and he must flee for his life. He is never to return to Cohenburg castle. Alphonsus’s adventures include being a soldier, a miner, and a church sacristan. He meets and weds Lauretta, but she is kidnapped by a group of ruffians. Alphonsus must solve the mystery of his wife’s disappearance and the question of his mother’s strange pronouncement. Add to those dilemmas the news of ghosts haunting his family’s castle and the sound of great bell each night at midnight, and one has a complete Gothic delight.

The Horrid Mysteries: A Story from the German of the Marquis of Grosse (a translation of the German Gothic novel Der Genius) (1796)

It was first published by the sensationalist Minerva Press in 1796. A later, two-volume edition published by Robert Holden and Co., Ltd. in 1927 includes a new introductory essay by Montague Summers. The books were bound in pictoral boards, and feature a period-style “advertisement” for Pears’ Soap on the rear cover. The hero of the tale, the Marquis of Grosse, finds himself embroiled in a secret revolutionary society which advocates murder and mayhem in pursuit of an early form of communism. He creates a rival society to combat them and finds himself hopelessly trapped between the two antagonistic forces. The book has been both praised and lambasted for its lurid portrayal of sex, violence and barbarism. H. P. Lovecraft, in his lengthy essay Supernatural Horror in Literature, dismissed it and others like it as “…the dreary plethora of trash like Marquis von Grosse’s Horrid Mysteries…”(Wikipedia)

Regina Jeffers is the award-winning author of Austenesque, Regency and historical romantic suspense.
View all posts by reginajeffers →
This entry was posted in book excerpts, British history, castles, gothic and paranormal, Great Britain, Jane Austen, Living in the Regency, Regency era, Victorian era and tagged Clermont, Horrid Novels, Jane Austen, Northanger Abbey, The Castle of Wolfenbach, The Horrid Mysteries, The Midnight Bell, The Mysterious Warning, The Necromancer, The Orphan of the Rhine. Bookmark the permalink.

9 Responses to Northanger Horrid Novels ~ Are They Real?