The Mention of “PTSD” in Early Literature 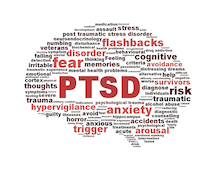 I have a new release coming soon from Pegasus Books in which the illness we now call PTSD (Post Traumatic Stress Disorder) plays a major role. The main character is accused of a series of violent crimes. Although he holds no memory of the events, the major general possesses the opportunity to commit the acts, and he has been seen in the vicinity of the crimes.

All this sounds quite cut and dry if the events did not happen in 1816, in the midst of King George’s England after the Napoleonic Wars. PTSD did not exist as we know it. So, what do we know of PTSD in history?

GotQuestions.org provides us with a summary of PTSD. “Post traumatic Stress Disorder develops in some people following a traumatic event. The event or “stressor” could be exposure to death or threatened death, actual or threatened serious injury, or actual or threatened sexual violence. The sufferer may be directly exposed, indirectly exposed through a family member or close friend experiencing the event, or extremely or repeatedly indirectly exposed through his or her work (such as first responders, police officers, military personnel, or social workers). Common trauma experiences are combat, car accidents, natural disasters, abuse, rape, and mass violence. After such an event most people will show signs of stress such as feeling on edge, anxiety, fear, anger, feelings of depression, a sense of detachment, desire to avoid trauma-related reminders, flashbacks, difficulty sleeping, headaches, changes in appetite, irritability, self-blame, “survivor’s guilt,” or a sense of numbness. For most people, these reactions lessen and eventually subside with time.”

In the Bible, Job likely suffers from PTSD. Job loses his wealth, family, health, etc. Job says of his suffering: “For my sighing cometh before I eat, and my roarings are poured out like the waters./ I was not in safety, neither had I rest, neither was I quiet; yet trouble came.” (Job 3:25-26) In Job 7: 14-15, we find, “Then thou scariest me with dreams, and terrifies me through vision:/ So that my soul chooseth strangling, and death rather than my life.”

From The History of Post Traumatic Stress Disorder, we learn more of the history of the illness. In “Mahabharata, an epic tale in Indian mythology originally written by Sage Ved Vyas in Sanskrit, Mahabharata illustrates the Great War of Mahabharat between the Pandavas and the Kauravas that happened in 3139 B. C. […] The great epic Mahabharata describes vivid combat stress reactions exhibited by the ancient worriers.” (Sir Lanka Guardian)

Below is an excerpt from the horrendous combat events described in Mahabharata (as translated by Dr P. V. Vartak):  “On the 14th day of the Mahabharat War, i.e., on 30th October a similar phenomenon took place. Due to the October heat enhanced with the heat of the fire-weapons liberally used in the War, the ground became so hot that the layers of air near it were rarefied while the layers at the top were denser. Therefore the sun above the horizon ws reflected producing its image beneath. The Sun’s disc which was flattened into an ellipse by a general refraction was also joined to the brilliant streak of reflected image. The last tip of the Sun disappeared not below the true horizon, but some distance above it at the false horizon. Looking at it, Jayadratha came out and was killed. By that time, the same appeared on the true horizon. Naturally there was no refraction because the light rays came parallel to the ground. This revisualized the Sun at the true horizon. Then the sun actually set, but the refraction projected the image above the horizon. The sun was thus visible for a short time, which then set again.” (Sir Lanka Guardian)

Examples in literature abound of the evidence of PTSD. The Illiad describes multiple battles scenes and combat suffering. Could Ajax in Homer’s tale suffer from the disorder? And what of Achilles? Was not Achilles devastated by the death of his comrade Patroklos? And what of the Trojan women who waited for their husbands’ return.

Of Peleus’ son, Achilles, sing, O Muse,
the vengeance, deep and deadly; whence to Greece
unnumbered ills arose; which many a soul
of mighty warriors to the viewless shades
untimely sent; they on the battle plain
unburied lay, a prey to ravening dogs,
and carrion birds; but so had Jove decreed,
from that sad day when first in wordy war,
the mighty Agamemnon, King of men,
confronted stood by Peleus’ godlike son.
(Derby) from Illiad Study Questions
http://www.tc.umn.edu/~briel001/iliadstudyquestsngs%20

Again from The History of Post Traumatic Stress Disorder, we have another incidence of the human suffering of war. “According to archaeological and literary evidence the Jataka stories were compiled in the period, the 3rd Century B.C. to the 5th Century A.D. The Khuddaka Nikaya contains 550 stories the Buddha told of his previous lifetimes as an aspiring Bodhisatta. […] In the Jataka stories there are numerous characters who display hysteria type reactions. For instance in the Maranabheruka Jathaka, one monk shows anxiety based reactions that are similar to modern day PTSD. This monk displays extreme fear, hyper-arousal, avoidance, frightful mental pictures (flashbacks?) and emotional anesthesia.”

In the piece entitled “From ‘Irritable Heart’ to ‘Shellshock’: How Post-Traumatic Stress Became a Disease,” we have, “The Greek historian Herotodus writes a lot about PTSD, according to a presentation by Mylea Charvat to the Veterans Administration. One soldier, fighting in the battle of Marathon in 490 BC, reportedly went blind after the man standing next to him was killed, even though the blinded soldier “was wounded in no part of his body.” Also, Herotodus records that the Spartan leader Leonidas — yes, the guy from 300 — dismissed his men from combat because he realized they were mentally exhausted from too much fighting.”

In Shakespeare, we find a description of PTSD in Henry IV, Part 2.
Tell me, sweet lord, what is’t that takes from thee  Thy stomach, pleasure, and thy golden sleep? Why dost thou bend thine eyes upon the earth, And start so often when thou sit’st alone? Why hast thou lost the fresh blood in thy cheeks, And given my treasures and my rights of thee To thick-eyed musing and cursed melancholy?

“Macbeth: How does your patient, doctor?

Doctor: Not so sick, my lord, as she is troubled with thick-coming fancies that keep her from rest.

Macbeth: Cure her of that! Canst thou not minister to a mind diseased, pluck from the memory a rooted sorrow, raze out the written troubles of the brain, and with some sweet oblivious antidote cleanse the stuffed bosom of that perilous stuff which weighs upon her heart.

Doctor: Therein the patient must minister to himself.”

Samuel Pepys describes trauma after the Great Fire of London in a diary entry dated 2 September 1666:

“  Some of our maids sitting up late last night to get things ready against our feast today, Jane called up about three in the morning, to tell us of a great fire they saw in the City. So I rose, and slipped on my night-gown and went to her window, and thought it to be on the back side of Mark Lane at the farthest; but, being unused to such fires as followed, I thought it far enough off, and so went to bed again, and to sleep…. By and by Jane comes and tells me that she hears that above 300 houses have been burned down tonight by the fire we saw, and that it is now burning down all Fish Street, by London Bridge.

“So I made myself ready presently, and walked to the Tower; and there got up upon one of the high places,…and there I did see the houses at the end of the bridge all on fire, and an infinite great fire on this and the other side…of the bridge. .  So down [I went], with my heart full of trouble, to the Lieutenant of the Tower, who tells me that it began this morning in the King’s baker’s house in Pudding Lane, and that it hath burned St. Magnus’s Church and most part of Fish Street already.

“So I rode down to the waterside,…and there saw a lamentable fire…. Everybody endeavouring to remove their goods, and flinging into the river or bringing them into lighters that lay off; poor people staying in their houses as long as till the very fire touched them, and then running into boats, or clambering from one pair of stairs by the waterside to another. And among other things, the poor pigeons, I perceive, were loth to leave their houses, but hovered about the windows and balconies, till they some of them burned their wings and fell down.

“Having stayed, and in an hour’s time seen the fire rage every way, and nobody to my sight endeavouring to quench it,…I [went next] to Whitehall (with a gentleman with me, who desired to go off from the Tower to see the fire in my boat); and there up to the King’s closet in the Chapel, where people came about me, and I did give them an account [that]dismayed them all, and the word was carried into the King. so I was called for, and did tell the King and Duke of York what I saw; and that unless His Majesty did command houses to be pulled down, nothing could stop the fire. They seemed much troubled, and the King commanded me to go to my Lord Mayor from him, and command him to spare no houses….” (Sir Lanka Guardian)

Charles Dickens speak of how a train accident affected him. He says he was ”curiously weak… as if I were recovering from a long illness,” after a traumatizing railway accident in which the front of the train plunged off a bridge under repair and 10 people died, with another 49 injured. Dickens wrote in letters to people: “I begin to feel it more in my head. I sleep well and eat well; but I write half a dozen notes, and turn faint and sick… I am getting right, though still low in pulse and very nervous.” Dickens admitted to continue to feel anxiety when train travel was necessary, even after the accident described above. (From ‘Irritable Heart’ to ‘Shellshock’)

Although in my story there is no real “word” or “diagnosis” to describe the effects of war, the early literature tells us that some sort of upheaval most assuredly did exist. So wether we call it melancholia, nostalgia, ester root, heimweh, malady du pays, soldier’s heart, neurasthenia, hysteria, compensation sickness, railway spine, shell shock, combat exhaustion, stress response syndrome, situational disorders, or PTSD, physical shock, accompanied by horrifying circumstances have haunted men since the beginning of time.

Look for The Prosecution of Mr. Darcy’s Cousin: A Pride and Prejudice Mystery coming soon to fine book stores.

About Regina Jeffers
Regina Jeffers is an award-winning author of cozy mysteries, Austenesque sequels and retellings, and Regency era romances. A teacher for thirty-nine years, Jeffers often serves as a consultant for Language Arts and Media Literacy programs. With multiple degrees, Regina was a Time Warner Star Teacher, Columbus (OH) Teacher of the Year, and a Martha Holden Jennings Scholar. With 6 new releases coming out in 2015, Jeffers is considered one of publishing’s most prolific authors. Come check out some of her 19 novels: Darcy’s Passions, Captain Frederick Wentworth’s Persuasion, The Mysterious Death of Mr. Darcy, A Touch of Grace, A Touch of Honor, and The First Wives’ Club.

Coming Soon: Angel Comes to the Devil’s Keep and A Touch of Emerald:The Conclusion to the Realm Series

1 Response to The Mention of “PTSD” in Early Literature