One Calamity Solves Another: The Great Plague of 1665 and the Great Fire in London in 1666

Posted on April 7, 2015 by reginajeffers 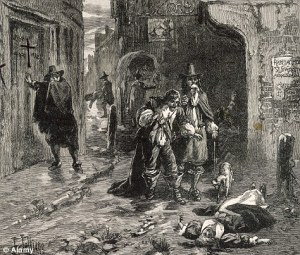 In 1580, the Lord Mayor of London complained publicly of the number of burials at St. Paul’s. Evidently, there were so many bodies that when the sextons dug additional graves, he opened previous ones. The Lord Mayor “suggested” other parishes not send their bodies to St. Paul’s.

Another outbreak of the disease came in 1606. During this time, watchmen were stationed outside infected houses.

Other flareups of the disease came in 1625 and between 1629-1631. The government issued orders that the streets were to be kept clean and the ditches used for human waste cleansed. Infected houses were marked with a red cross or the words “Lord have mercy.” Guards were posted outside infected houses to prevent the comings and goings of those inside. Public meetings and sporting events (bear-baitings, prize fights, etc.) were prohibited.

Again in 1636, London knew another bout of the plague. This time, those who disobeyed the ordinances to contain the disease were sent to Newgate.

The Continent was drowning in plague victims in 1663. Amsterdam and Hamburg were known to be heavily infested. Therefore, London took unprecedented measures by putting in place a quarantine; yet, the effort was fruitless. The Great Plague arrived in England in the spring 1665. By the early autumn months, 60-70% of those infected lost their lives. Figures of the time say over 100,000 people succumbed to the disease in less than 6 months. During the winter of 1665 and the early spring of 1666, the number of casualties lessened, but by summer of 1666, the plague had reclaimed its reign over London. 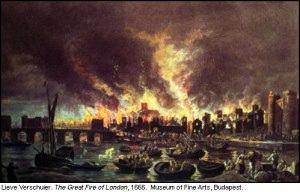 However, even the Great Plague was no opponent for an even greater event: The 1666 Great Fire in London. In The History of England by Thomas Babington Macaulay, 1st Baron Macaulay, called the fire “such as had not been known before in Europe since the conflagration of Rome under Nero, laid in ruins the whole city, from the Tower to the Temple, and from the river to the purlieus of Smithfield.”

The fire served as the “disinfectant” required to wipe out the plague. The older parts of London were laid bare. Sir John Simon, who was the first Chief Medical Officer for Her Majesty’s Government from 1855–1876, said of the buildings and their inhabitants, “Unsunned, unventilated dwellings, they, from when they were built, had been saturating themselves with streams of uncleanliness, and their walls and furniture must have stored an infinity of ancestral frowziness and infection. These nests of pestilence had gone to nought; and even out of the soil, congested to its depths with filth, and filth had been burnt away as in a furnace.”

Although the Great Fire of London was an unparalleled calamity, one thing proved true: The Levantine Plague no longer an issue in London.

Information for this post comes from Encyclopedia Britannia and Temple Bar, Volume 94.

Regina Jeffers is the award-winning author of Austenesque, Regency and contemporary novels.
View all posts by reginajeffers →
This entry was posted in British history, Great Britain and tagged Great Fire of London, medicine, plague. Bookmark the permalink.

6 Responses to One Calamity Solves Another: The Great Plague of 1665 and the Great Fire in London in 1666