Calomel: A Poison Once the Standard for Medical Treatment

Posted on April 6, 2015 by reginajeffers

Many of you who follow this blog are parents and grandparents. Are we not glad that this medicine is no longer a part of our children’s teething issues? Read on…

From Evidence Based Science we learn that Calomel was once considered standard medicine.
It may be hard to believe now, but this was considered good science at one time, and was used for teething with babies. It was called Calomel, but it is Mercury.

From LOYOLA UNIVERSITY CHICAGO
Medical uses for calomel were common well into the nineteenth century. It acts as a purgative and kills bacteria (and also does irreversible damage to their human hosts). Some treatments are of historical interest. The three physicians atttending Gen. Washington’s final hours administered calomel to the dying President. Lewis and Clark carried it on their expedition and used it to treat their men’s STD’s. Louisa May Alcott (author of Little Women) suffered from its effects. Even in the present decade several cases of mercury poisoning have been attributed to facial cremes containing calomel. Such cremes are banned in the United States because mercury is readily absorbed through the skin.
http://www.luc.edu/faculty/spavko1/minerals/calomel/calomel-main.htm

The Encyclopedia Britannica provides the following information regarding calomel:

Once the most popular of cathartics, calomel has been used in medicine since the 16th century. The recognition of its potential toxicity (because of disassociation into mercury and mercuric chloride), together with the development of superior and safer cathartics, led to a decline in its use in internal medicine. It has found application in certain insecticides and fungicides, however. The compound is also used in the construction of calomel electrodes for potentiometric titration (a chemical technique designed to measure the potential between two electrical conductors in a medium such as an electrolyte solution).

From Vancouver’s The Herb Museum website we find an “advert” for a wintergreen flavored calomel from Parke, Davis & Co out of Detroit, Michigan. The information describes many uses for calomel. 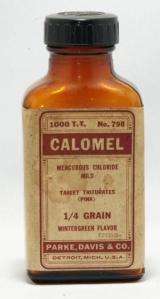 7 Responses to Calomel: A Poison Once the Standard for Medical Treatment