Posted on March 3, 2015 by reginajeffers

Before succumbing to his illness, George III had a sometime tempestuous relationship with members of his family.

The king’s second son, Prince Frederick, Duke of York, found himself in a scandal, along with his mistress, Mary Ann Clarke. They were both accused of profiting from the sale of army promotions during the Napoleonic campaign. The Duke was found not guilty of corrupt practices, but he was relieved of his duties as Commander-in-Chief of the Army. As the king’s favorite, this was a great blow to the Royal family. Earlier in his career, Frederick had fought a duel in defense of his brother, the Crown Prince. One of the queen’s ladies had insulted both Frederick and Prince George. Frederick gave the woman a good set down. Then the lady’s son challenged Frederick to a duel. His opponent came within an inch of placing his bullet in the prince’s head.

Ernest, Duke of Cumberland, was once brought under suspicion of murder. He was the least likeable of the king’s sons. Ernest was said to be vain and easily rowed to anger. He had an war injury, which caused his left eye to have a sunken look. Ernest often spread malicious gossip about his family members. Some felt that Ernest was “too fond” of his sister Sophia. Many thought the prince to be bisexual or homosexual. When the duke’s valet (Joseph Sellis) was found in the ducal apartments with his throat slit, people believed the two had had a homosexual relationship, and that the valet was blackmailing Ernest. Sellis’s death was ruled a suicide, but the finding was questioned. For the wound to be self-inflicted, Sellis would have had to be right handed. Ironically, the man was left-handed.

King George preferred Frederick to his heir, Prince George. The king found his eldest son too effeminate. By the Golden Jubilee, the king was 72 years old, and the Crown Prince was 50. By this time, the two very much despised each other…more than likely wishing the other would “meet his Maker.” 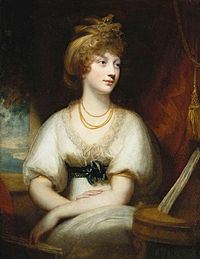 George III preferred his daughters over his sons; however, she and her sisters lived in fear of their mother. The princesses were well-educated but raised in a rigidly strict household. Though he disliked the idea of matrimony for his daughters, King George had intended to find them suitable husbands when they came of age. However, the King’s recurring bouts of madness, as well as the Queen’s desire to have her daughters live their lives as her companions, stopped would-be suitors from offering for the most of the princesses. As a result, Sophia and all but one of her sisters grew up in their mother’s cloistered household, which they frequently referred to as a “Nunnery”.

As George III prepared for his Golden Jubilee, his daughter, the Princess Amelia (age 27) lay dying within the palace. Princess Amelia was born on 7 August 1783, at the Royal Lodge, Windsor, the youngest of George III and Queen Charlotte’s fifteen children as well as the only of her siblings born at Windsor Castle. It is often said that she was her father’s favourite; he affectionately called her “Emily”. She was born after the early deaths of her two elder brothers, Octavius (23 February 1779 – 3 May 1783) and Alfred (22 September 1780 – 20 August 1782). These deaths left a gap of almost six years between Amelia and her nearest surviving sibling, Princess Sophia. She was twenty-one years younger than her eldest sibling, George, and nearly seventeen years younger than her eldest sister, Charlotte. As the daughter of the monarch, she was styled Her Royal Highness the Princess Amelia from birth. The girl gave her father a keepsake by which to remember her. It was a ring containing one of her jewels and a lock of her hair. The inscription read: “Remember Me.” Amelia had fallen in love with Charles Fitzroy, one of the king’s equerries, but had not been allowed to marry him. Ironically, she left everything to Fitzroy in her will.

By the Golden Jubilee, only Princess Charlotte had married. The king’s other daughters were approaching middle aged (for that time period). They were not “attractive” women, and they found few prospects.

Though she never wed, rumours spread that Princess Sophia became pregnant by Thomas Garth, an equerry of her father’s, and gave birth to an illegitimate son in the summer of 1800. Other gossips declared the child was the product of rape by her elder brother the Duke of Cumberland, who was deeply unpopular. Historians are divided on the validity of these stories, as some believe she gave birth to Garth’s child while others call them tales spread by the Royal Family’s political enemies. A third set of rumors say the family spent a great deal of time trying to hide from the king the fact that Princess Sophia had borne an illegitimate child, whose father was an ugly, dwarf, some 33 years older than Sophia.

Wikipedia was used for the information in this post.