Sir Thomas Vaughan, a Patriot and a Traitor to Kings 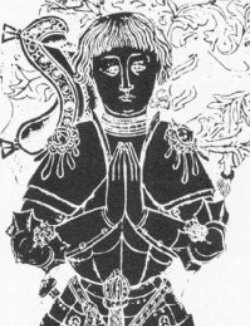 Sir Thomas Vaughan (c. 1410 – June 1483) was a Welsh statesman and diplomat, who rose to prominence before and during the Wars of the Roses. He began as an adherent of Jasper Tudor and King Henry VI of England and was appointed to several offices by Henry. He was nonetheless a Yorkist by inclination, as were many Welshmen of the time. After the Yorkist victory in 1461 he became a loyal and important servant of King Edward IV. In 1483, he was executed by Richard III as part of his seizure of the throne.

Life
Vaughan was the son of Robert and Margaret Vaughan of Monmouth. In 1446 he was appointed to the offices of Steward, Receiver, and Master of the Game in Herefordshire and Ewyas, and Steward, Constable, Porter, and Receiver of Abergavenny. In 1450, he became Master of the Ordnance. He entered Parliament in 1455 as MP for Marlborough.

Despite his early association with Jasper Tudor, Earl of Pembroke, Vaughan was accused of plotting against King Henry VI of England as early as 1459. Somehow he regained the king’s favour, and in 1460 was appointed Keeper of Henry VI’s “great Wardrobe.”

After Henry’s defeat at Saint Albans in 1461, Vaughan, along with Philip Malpas and William Hatclyf, sailed for Ireland with Henry’s treasury, but were captured by French pirates. Edward IV, surprisingly, ransomed Vaughan from the pirates, for which Vaughan was forever afterwards loyal. Edward soon came to trust Vaughan and placed him in high offices.

Edward also sent Vaughan as ambassador to the courts of Burgundy and France. He helped negotiate the marriage of Edward’s sister, Margaret, to the Duke of Burgundy in 1468.

In 1475, on the same day that Edward’s eldest son, the future Edward V, was invested as Prince of Wales, Vaughan was knighted, having acted for some years as Chamberlain to the young prince.

In 1478, he was elected to parliament as knight of the shire for Cornwall.

According to the website Haunted Britain,”Towards the end of the 15th century Sir Thomas Vaughan resided at Hergest Court in the days when it was a much grander and more heavily fortified property than the farmhouse that greets visitors today. Vaughan was the very embodiment of the archetype wicked squire, and was known in the district simply as so ’Black Vaughan.’”

After Edward IV died in 1483, Vaughan was accompanying Edward V from Ludlow to London when the party was intercepted by the future King Richard III, then Duke of Gloucester. Richard had Vaughan arrested and executed. The execution is believed to have taken place some time between 13 and 25 June at Pontefract Castle in West Yorkshire.

Vaughan was the second husband of Eleanor Arundel, widow of Sir Thomas Browne, who had likewise been executed in 1460.

In Shakespeare’s Richard III, Vaughan’s ghost appears to the King on the eve of the Battle of Bosworth.

1 Response to Sir Thomas Vaughan, a Patriot and a Traitor to Kings