All Hallows-by-the-Tower, also previously dedicated to St. Mary the Virgin and sometimes known as All Hallows Barking, is an ancient Anglican church on Byward Street in the City of London, overlooking the Tower of London. The church and Tower Hill play a role in the climax of my current Work in Progress (WIP), a cozy mystery.

Founded in 675, it is one of the oldest churches in London and contains, inside, a 7th-century Saxon arch with recycled Roman tiles, the oldest surviving piece of church fabric in the city. (St. Pancras Parish Church in King’s Cross has been a place of Christian worship since the sixth century.)

History
All Hallows-by-the-Tower was first established in 675 by the Saxon Abbey at Barking and was for many years named after the abbey, as All Hallows Barking. The church was built on the site of a former Roman building, traces of which have been discovered in the crypt. It was expanded and rebuilt several times between the 11th and 15th centuries. Its proximity to the Tower of London meant that it acquired royal connections, with Edward IV making one of its chapels a royal chantry and the beheaded victims of Tower executions being sent for temporary burial at All Hallows.

The church was badly damaged by an explosion in 1650 caused when some barrels of gunpowder being stored in the churchyard exploded; its west tower and some 50 nearby houses were destroyed, and there were many fatalities. The tower was rebuilt in 1658, the only example of work carried out on a church during the Commonwealth era of 1649-1660. It only narrowly survived the Great Fire of London in 1666 and owes its survival to Admiral William Penn, father of William Penn of Pennsylvania fame, who had his men from a nearby naval yard demolish the surrounding buildings to create firebreaks. During the Great Fire, Samuel Pepys climbed the church’s spire to watch the progress of the blaze and what he described as “the saddest sight of desolation.”

Restored in the late 19th century, All Hallows was gutted by German bombers during the Blitz in World War II and required extensive reconstruction, only being rededicated in 1957.

Many portions of the old church survived the War and have been sympathetically restored. Its outer walls are 15th-century, with a 7th-century Saxon arch doorway surviving from the original church, which is the oldest piece of church material in London. Many brasses remain in the interior (where one of London’s brass rubbing centres is now located). Three outstanding wooden statues of saints dating from the 15th and 16th centuries can also be found in the church, as can an exquisite Baptismal font cover which was carved in 1682 by Grinling Gibbons for ₤12, and which is regarded as one of the finest pieces of carving in London. In 1999, the AOC Archaeology Group excavated the cemetery and made many significant discoveries.

The church has a museum called the Undercroft Museum, containing portions of a Roman pavement which together with many artefacts was discovered many feet below the church in 1926. The exhibits focus on the history of the church and the City of London, and include Saxon and religious artefacts. Also on display are the church’s registers dating back to the 16th century, and notable entries include the baptism of William Penn, the marriage of John Quincy Adams, and the burial of Archbishop William Laud. Laud remained buried in a vault in the chapel for over 20 years; it was moved during the Restoration to St. John’s College, Oxford.

The altar in the crypt is of plain stone from the castle of Richard I at Athlit in The Holy Land.

All Hallows-by-the-Tower has been the Guild church of Toc H since 1922. The church was designated a Grade I listed building on 4 January 1950. 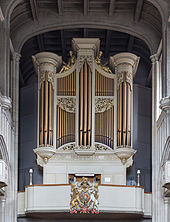 The earliest records of an organ in All Hallows is one by Anthony Duddyngton dating from 1521. This was presumably lost during the English Civil War.