My latest Work In Progress is set in Cheshire, England. In doing part of my research of the geological aspects of the area, I came across several Iron Age earthworks, which I found fascinating. Permit me to introduce you to Bickerton Hill. 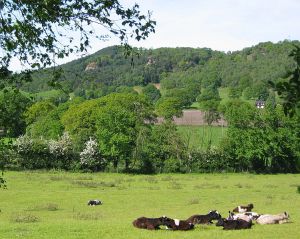 Bickerton Hill refers to two low red sandstone hills that form the southern end of the Mid Cheshire Ridge in Cheshire, in northwest England. The high point, Raw Head, lies on the northerly hill and has an elevation of 227 metres. Parts of the southerly hill are also known as Larkton Hill.

There is evidence of settlement on the hills dating from the neolithic or Bronze Age. The earthworks of an Iron Age hill fort, Maiden Castle, are located on the summit of the southerly hill; they are a Scheduled Monument. The hills have been quarried and mined for copper since the 17th century, and a grade-II-listed engine house chimney remains as a remnant of the mining industry. Several caves occur in the sandstone, some of which have a history of habitation. The Sandstone Trail, a long-distance footpath, runs along the ridge, and the area is popular with walkers.

A large area of the southerly hill is protected as a Site of Special Scientific Interest (SSSI) for its biological importance; much of this hill is owned by the National Trust. Its summit plateau has an extensive area of lowland heath, a rare habitat in Cheshire, and one that is particularly important for reptiles. A substantial population of Lobed Maidenhair Spleenwort, a fern that is rare in Britain, is found here. Nationally scarce species observed in the area include the bleached pug and alder kitten moths, and the Malthius frontalis species of soldier beetle. The western escarpment of the northerly hill has also been designated an SSSI for its exposed Triassic sandstones.

Neolithic and Bronze Age
Cropmarks near Rawhead Farm suggest a possible neolithic or Bronze Age settlement on the northern hill, which is of the “banjo enclosure” type, consisting of a circular enclosure with a narrow enclosed entrance.  Two flint artefacts have been found on the southern hill: a leaf-shaped flint of unknown date and a Bronze Age arrowhead.  A Bronze Age burial mound of the bowl barrow type is located on top of an unnamed knoll immediately to the east of the southerly Bickerton Hill (SJ51055269). 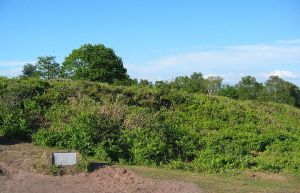 Earth rampart of the iron age hill fort, Maiden Castle, on the summit of Bickerton Hill in Cheshire, in June 2006. The small plaque shown here has since been replaced by a much larger interpretive sign

Maiden Castle, Cheshire
The remains of an Iron Age promontory hill fort, Maiden Castle, are located on the southernmost summit of the southerly hill at an elevation of 212 metres.  Maiden Castle dates from around 600 BC and is the most southerly of the seven hill forts in Cheshire.  The double line of earth ramparts are still visible, forming a semicircle that encloses an area of 1.3 acres (5,300 m2) adjacent to the cliff edge.  The enclosure has a single entrance at the east side with inturned defensive banks. Archaeological investigations have shown that both ramparts are strengthened by dry stone walling; the inner rampart also has timber strapping.  The fort was destroyed by fire in around 400 BC,  although the area was probably used as a settlement until the Roman invasion of Britain in the 1st century AD.

The site is well preserved despite quarrying of the area during the 17th to early 20th centuries, as well as military training exercises during the 20th century.  The remaining earthworks have been designated a Scheduled Monument, and the site is owned by the National Trust.  Since 2009, the trust has been removing trees, scrub and bracken from the site, as the roots damage the earthworks.  Animal burrows are another threat, and footpath erosion from visitors is also a problem, as the Sandstone Trail cuts across the earthworks.  There is another Maiden Castle which is an Iron Age hill fort 2.5 kilometres (1.6 mi) south west of Dorchester, in the English county of Dorset.

Anglo-Saxon and Norman
The name “Bickerton” is Anglo-Saxon in origin, and relates to bees.  A township was recorded in the Domesday survey, which was found “waste”, or devastated, at the time of the survey, in common with many nearby townships.  This is usually considered to be a consequence of William I’s suppression in 1069–70 of uprisings in north-west Mercia.  The township included half a league (about ¾ mile) of woodland, perhaps located on the hills. 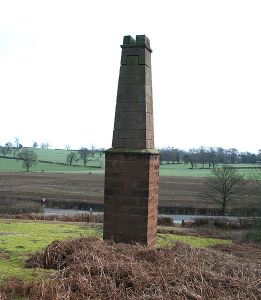 17th–19th century
Copper mining at Bickerton was first recorded in 1696. The mine was owned by the Egerton family of Oulton, with eight miners being employed between 1696 and 1698. There were six shafts, one of which was deepened to 156 feet (48 m) in 1807.  The mines were worked intermittently until 1906.  A rare remnant of this local industry is a disused mine engine house chimney in red sandstone, which stands by the A534 at the foot of the northerly hill near Gallantry Bank. The flue of a pumping engine that was used to drain the mine, it dates from the early 19th century and is a grade-II-listed building.  The remains of adjacent mining buildings were still standing in around 1920.  The Copper Mine public house at nearby Broxton displays mining equipment and pictures. 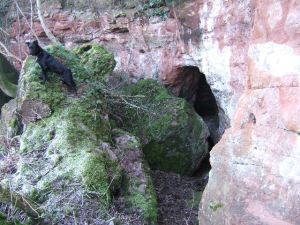 Mad Allen’s Hole
Mad Allen’s Hole, a cave on the southerly Bickerton Hill, is believed by some to be the location of “Allenscomb’s Cave” in which John Harris, “the English Hermit,” lived for 46 years in the 18th century. According to a pamphlet of 1809, Harris was a man of property from Handley, who embraced a hermit’s life when his parents refused him permission to marry the woman of his choice. He first inhabited a cave in nearby Carden Park, moving to Allenscomb’s Cave in the 1760s.  Recent research has, however, cast doubt on the identification of Mad Allen’s Hole with Allenscomb’s Cave. Unlike the cave in Carden Park, no material dating to the 18th century has been discovered at Bickerton, and the name “Mad Allen’s Hole” originated in the late 19th century, when the cave was occupied by an eccentric known as Mad Allen.  In the early 19th century, the Bloody Bones caves on the northerly hill were occupied by brigands, who terrorised the surrounding countryside, stealing cheese from local farms and plundering graves, as well as selling sand for cleaning. Seven were captured and executed in around 1834.

20th–21st century
The area around Maiden Castle was used for military training exercises during the 20th century, which included digging numerous two-man slit trenches. The heathland of the southerly hill went unmanaged from the 1940s until 1983, when 66 hectares (160 acres) of land were acquired by the National Trust; the trust’s holding was extended by 51 hectares (130 acres) in 1991.  Much of the southerly hill and the western escarpment of the northerly hill were notified as two separate Sites of Special Scientific Interest in 1979.
The Sandstone Trail long-distance footpath opened in 1974; it then started in Duckington, immediately south of the southerly hill.  The Sandstone Trail Race was launched three years later.  A 2008 proposal to construct a 60 metre wind-monitoring mast adjacent to Bickerton Hill met with local protest,  and was rejected by Crewe and Nantwich Borough Council.