“Watering Holes” were part of the lifestyle of those of the haut ton during the Regency Era and beyond. At Bath and Brighton and Margate and Ramsgate, etc., people returned annually to drink the healing waters, attend the assemblies, and to  take dips in the sea water. At Cheltenham, Tunbridge Wells, and Harrogate, inland spas, healing springs brought in the crowd.

What entertainments drew the crowds to these English resorts? Dances and card parties and promenading along the boardwalks were headliners for the very social members of the ton. It was the old adage of seeing and being seen. Yet, surprisingly, there was the draw of the public libraries, which served their customers tea and coffee to drink while partaking of the latest newspapers and magazines, as well as many novels.

Books of bound caricatures and prints were available to review on site or even be loaned out to customers. At Sidmouth, educational toys and children’s books were housed in the collection. In the 1800s, the library system in England grew by leaps and bounds. For example, The Athenaeum in Liverpool, which opened in 1799, housed 6000 books. Subscribers of The Athenaeum paid 2 guineas per year for the services. Fancourts in London housed more than 40,000 choices.

In addition to the libraries, other “cultural” elements became popular in the resort areas. Circuses and magic shows, as well as “fair” performers made the watering holes their homes during part of the year. Concerts and puppet shows took place in public parks. The best of London’s productions made appearances on tour. For example, the Italian opera and Drury Lane repertory companies made regular stops in the many resorts as part of their summer tours.

In Mrs Jordan’s Profession from Claire Tomalin, the author speaks of the tours of Mrs Dorothea Jordan. Dorothea Jordan (21 November 1761 – 5 July 1816) was an Anglo-Irish actress, courtesan, and the mistress and companion of the future King William IV, for 20 years while he was Duke of Clarence. Together they had ten illegitimate children, all of whom took the surname FitzClarence. Mrs Jordan wowed audiences inExeter, Portsmouth, Gosport, Southampton, Salisbury, Margate, Ramsgate, Deal, Canterbury, and Brighton. The royal family attended her performance in The Merry Wives of Windsor at Cheltenham. She packed houses in Leicester, Chester, York, and Liverpool. Mrs Jordan starred at the Theatre Royal in Bath for several seasons.

By the beginning of the 19th Century, new realizations had come to the citizenry of Bath: Communal baths were probably not the most sanitary. It was customary for anyone to have access to the water, meaning those with contagious diseases bathed in the same water as those with arthritic pain. In the King’s Bath, a tank of warm water, the patients sat side by side, with no distinguishing of either sex or disease. Men were dressed in special brown linen suits and women in off white linen suits of a similar style. Copper bowls of scented oils floated on the water to purify the air. In the Queen’s Bath, cold water was used. Even if one chose simply to drink the waters, he often drank from a glass used previously by another (without being washed in between users).

At the Pump Room in Bath, the orchestra played music throughout the day. Dancing began daily (except Sunday) at noon, with formal balls twice per week. “Starting at 6:00 in the evening…The programme was inviolable: minuets only for the first two hours. The country dances, which were much more fun and more energetic, started at 8:00. (The eighteenth-century rules specified that ‘No Lady dance country-dances in a hoop of any kind and those who choose to pull their hoops off will be assisted by proper servants in an apartment for that purpose.’ By the time of the Regency, of course, only the most old-fashioned dowagers would have appeared in public in a hoop, so the ban was irrelevant.) At 9:00 the company adjourned to the Tea Room for refreshments and the evening ended at 11:00 sharp. It is not surprising that the Prince Regent and his friends preferred the free and easy life of Brighton.” (From An Elegant Madness, pp 126-127) 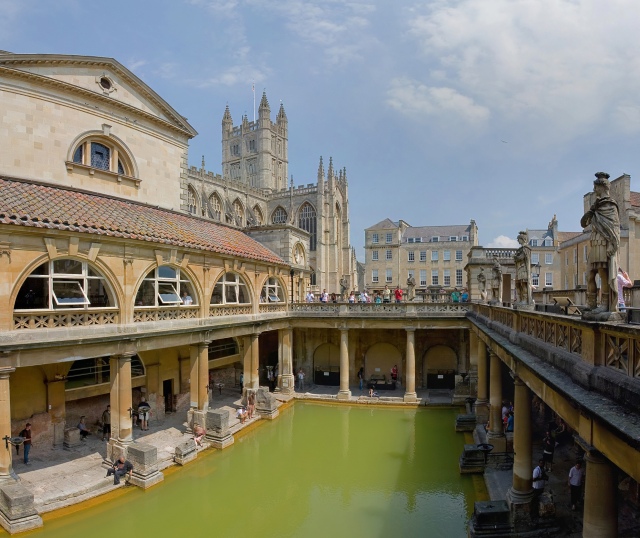 5 Responses to Life Beyond Bath (or) Regency Era Watering Holes