No Longer a Bumpy Ride! The 1762 Westminster Paving Act… 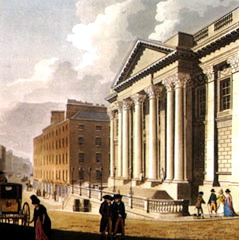 In doing research for my newest release, THE MYSTERIIOUS DEATH OF MR. DARCY, which is set in Dorset, I came across the Purbek marble, a fossiliferous limestone found on the Isle of Purbeck, a peninsula in southeast Dorset, England. That discovery led to one thing and then another, and finally, I came across the Westminster Paving Act of 1762, a dramatic step forward on behalf of London’s dwellers.

The Westminster Paving Act removed the responsibility of paving the streets from the individuals to a governmental type commission. Before the act, occupants were responsible for paving and cleaning a specified area before their residences.

From John Wood’s Description of Bath (1749), we discover:

But previous to the Duty of these Officers, every Housekeeper, inhabiting and residing within the City, Liberties, and Precincts thereof, is enjoined, Thrice in every Week at the least, that is to say, on Tuesday, Thursday, and Saturday, to sweep and cleanse, or cause to be swept and cleansed, all the Streets, Lanes, Alleys, and Public Places, before their respective Houses, Buildings, and Walls, and all other Public Places, to the End that the Filth, Ashes, Dirt, Dust, Rubble, and Rubbish may be ready to be carried away by the Scavengers, upon Pain to forfeit Three Shillings and Four-Pence for every Offence and Neglect. They are moreover Prohibited from throwing, casting, or laying; or from permitting any Person to throw, cast, or lay, any Ashes, Filth, Duff, Dirt, Rubbish, Dung, or other Annoyances, in any open Street, Lane, or Alley, within the said City, Liberties, Precincts, or Places aforesaid, before his or their own Dwelling-House, Buildings, or other Public Places within the said City; but, on the Contrary, are Required to keep, or cause the fame to be kept, in their respective Houses, Yards, or Backsides, until such Time as the Scavenger shall come by to receive and take the fame entirely away, under the Penalty of Five Shillings for every Offense.

Again, if any person or persons shall have any Straw or Hay, brought and thrown down for the Use or any Inn, or any other House, in any of the Streets, Lanes, Alleys, and other Public Places, within the said City, the Liberties, and Precincts thereof, and shall not carry the same into their Yards, Backsides, or Stables, sweep and clean the Place where such Straw or Hay was thrown down, and carry away the Rubbish occasioned thereby, within one Hour after such Straw or Hay shall be unloaded, he or they so neglecting is to forfeit Five Shillings for every Offense, to be levied by Distress and Sale of the Offender’s Goods, by Warrant, under the Hands of Two or more of the said Commissioners.

Now as to the Paving of the Streets, Lanes, Alleys, and Public Places of the City, every Occupier or Owner of any House, Houses, or Lands, next adjoining to such Street, Lane, Alley, or Public Place within the said City, Liberties or Precincts thereof, is Required, from Time to Time, within ten Days next after Notice given by the Surveyor, or Surveyors, to be appointed as above, well and sufficiently to pitch or pave, or cause to be pitched and paved, the Street, Alley, or Lane before his or their Houses, Habitations, Lands, and Public Places respectively, into the Middle of the Street, Lane, or Alley, except in the Market Place, and there only eight Feet in Width, under the Penalty of Ten Shillings for each Perch not so pitched; and so in Proportion for any greater or lesser Quantity or Space of Ground; and under the like Penalty for every Month, ‘till the same shall be pitched or paved; which Penalty is to be levied by Distress and Sale of the Offender’s Goods, and to be applied towards Maintaining one or more of the Scavengers to be appointed as aforesaid.

In London, the responsibility of paving and cleaning the streets was normally written into the building lease/sale. The problem with the London streets in the early 18th Century was the lack of consistency. The paving stones were round and fit to walk upon, but in a carriage the ride was quite rough. The wide flat stones, which were perfect underfoot, created a bumpy ride for they were raised above the flat of the road.

The 1762 Act specified that Purbeck stone should replace the previous stone. The act also called for the replacement of the drainage kennel, which was normally placed in the street’s middle, with kerbside gutters. This standard of the Purbeck stone remained in place throughout the late Georgian Period. Eventually, gravel was added between the stones to level out the road.

The act also required a system of street cleaning. As a side benefit of working as a Scavenger (those paid to clean the street by at a parish rate) grew, the streets became cleaner. For example, discarded ashes were collected to be sold to manufactures of inferior place bricks. Eventually, carts carrying water (barrels pierced with holes) kept the dust down on the road.

In the early 19th Century, the occupant was responsible for sweeping the pavement before his house. The parish scavenger removed the dirt from the street and that on the carriageway.

Unfortunately, all the laws of the land could not force those who occupied single rooms in lodge houses or those who frequented houses of ill repute or beer houses. There were some who simply did not care for the condition of the streets upon which they walked or rode.

1 Response to No Longer a Bumpy Ride! The 1762 Westminster Paving Act…