Previously, I looked at the history of the writing of Austen’s “first” and “last” novel. Today, we will spend a bit of time with the themes addressed, literary references, etc. Later, we will have a closer look at the main characters in a spoof of the 18th Century Gothic novel.

Major Themes
The intricacies and tedium of high society, particularly partner selection.
The conflicts of marriage for love and marriage for property.
Life lived as if in a Gothic novel, filled with danger and intrigue, and the obsession with all things Gothic.
The dangers of believing life is the same as fiction.
The maturation of the young into sceptical adulthood, the loss of imagination, innocence and good faith.
Things are not what they seem at first.
Social criticism (comedy of manners).
Parody of the Gothic novels’ “Gothic and anti-Gothic” attitudes.
In addition, Catherine Morland realises she is not to rely upon others, such as Isabella, who are negatively influential on her, but to be single-minded and independent. It is only through bad experiences that Catherine really begins to mature and grow up.

Northanger Abbey was the first novel Jane Austen wrote. It is also the novel most closely related to the novels that influenced Austen’s reading, and parodies some of those novels, particularly Anne Radcliffe’s Gothic novel The Mysteries of Udolpho. In creating Catherine, the heroine of Northanger Abbey, Austen creates the heroine of a Gothic novel. Both Austen and Catherine portray Catherine’s life in heroic terms—Austen humorously, and Catherine seriously, especially when she suspects  General Tilney of murdering his wife. Because Austen couches her portrayal of Catherine in irony, Catherine is realistically portrayed as deficient in experience and perception, unlike the heroines of Gothic and romance novels. Catherine fails to recognize the obvious developing relationship between her brother James and her friend Isabella; she fails to recognize Isabella’s true nature until long after it has hurt her brother; she accidentally leads John Thorpe into thinking she loves him; and most significantly, she embarrasses herself in front of Henry Tilney  when he finds out she suspects his father of murder. While Catherine is an avid reader of novels, she is inexperienced at reading people, and this is what causes many of the problems she encounters. By the end of the novel, she has become a much better judge of character, having learned from her mistakes with Isabella and General Tilney. She is also, perhaps, a bit more cynical about people, as Henry is. Ultimately, it is her integrity and caring nature that win Henry’s heart and bring her happiness.(Spark Notes)

Allusions/References to Other Works
Several Gothic novels are mentioned in the book, including most importantly The Mysteries of Udolpho and The Italian by Ann Radcliffe. Austen also satirises Clermont, a Gothic novel by Regina Maria Roche. This last is included in a list of seven somewhat obscure Gothic works, known as the ‘Northanger horrid novels’ as recommended by Isabella Thorpe to Catherine Morland:

“Dear creature! how much I am obliged to you; and when you have finished Udolpho, we will read The Italian together; and I have made out a list of ten or twelve more of the same kind for you.”
“Have you, indeed! How glad I am!—What are they all?”
“I will read you their names directly; here they are, in my pocket-book. Castle of Wolfenbach, Clermont, Mysterious Warnings, Necromancer of the Black Forest, Midnight Bell, Orphan of the Rhine, and Horrid Mysteries. Those will last us some time.”
“Yes, pretty well; but are they all horrid, are you sure they are all horrid?”
“Yes, quite sure; for a particular friend of mine, a Miss Andrews, a sweet girl, one of the sweetest creatures in the world, has read every one of them…”
Though these lurid titles were assumed by some to be Austen’s own invention, Montague Summers and Michael Sadleir discovered that they really did exist and have since been republished. [See my post on the Northanger Horrid Novels.]

Jane Austen, who referred to Fanny Burney as “the first of English novelists,” in Northanger Abbey refers to her inspiring novels:

“‘And what are you reading, Miss—?’ ‘Oh! It is only a novel!’ replies the young lady, while she lays down her book with affected indifference, or momentary shame. ‘It is only Cecilia, or Camilla, or Belinda‘; or, in short, only some work in which the greatest powers of the mind are displayed, in which the most thorough knowledge of human nature, the happiest delineation of its varieties, the liveliest effusions of wit and humour, are conveyed to the world in the best–chosen language.”

John Thorpe, who knows little about literature, tells Catherine that he likes The Monk (an over-the-top tale of lurid Gothic horror):

“Novels are all so full of nonsense and stuff; there has not been a tolerably decent one come out since Tom Jones, except The Monk; I read that t’other day; but as for all the others, they are the stupidest things in creation.”
“I think you must like Udolpho, if you were to read it; it is so very interesting.”
“Not I, faith! No, if I read any, it shall be Mrs. Radcliffe’s; her novels are amusing enough; they are worth reading; some fun and nature in them.”
“Udolpho was written by Mrs. Radcliffe,” said Catherine, with some hesitation, from the fear of mortifying him.
“No sure; was it? Aye, I remember, so it was; I was thinking of that other stupid book, written by that woman they make such a fuss about, she who married the French emigrant.”
“I suppose you mean Camilla?”
“Yes, that’s the book; such unnatural stuff! An old man playing at see-saw, I took up the first volume once and looked it over, but I soon found it would not do; indeed I guessed what sort of stuff it must be before I saw it: as soon as I heard she had married an emigrant, I was sure I should never be able to get through it.”

There are two kinds of reading in Northanger Abbey: reading books and letters, and reading people. Catherine Morland  is young and naïve, and she has a hard time distinguishing between the two types of reading. Before Catherine can really enter the world of adulthood, she needs to improve her ability to read people as well as novels. Throughout Northanger Abbey, Catherine finds herself unable to “read between the lines.” She does not notice the obvious romance developing between James and Isabella, she does not understand why Frederick Tilney gets involved, she has no idea why the General is so kind to her. All of these behaviors and motivations are clear to the reader and to the characters surrounding Catherine. When Catherine finally tries to do some of her own analysis, she gets her perceptions mixed up with those encouraged by her novel-reading: she recognizes General Tilney’s grumpiness and the tyrannical control he tries to exert over his children, but she attributes his attitude to the grisly murder of his wife, since such a plot twist occurs frequently in Gothic novels. One defining moment for Catherine comes as a result of reading text. She receives a letter from Isabella, and its contents open Catherine’s eyes to Isabella’s manipulative, ambitious ways. It would be going a bit too far to say that Catherine is an expert at reading people by the end of the novel, but she does become better at it, and she has learned when imagination can aid perception, and when it can hurt it.
Wealth
In Austen’s novels, characters are often partly defined by their wealth and status. In Northanger Abbey, several characters are preoccupied with material longings. Isabella wants to marry someone rich, and forsakes James in favor of the richer Frederick. Mrs. Allen is obsessed with clothing and shopping, and when talking to Mrs. Thorpe, she feels less bad about her own childlessness when she notices the shabbiness of Mrs. Thorpe’s clothes. The General wants his children to marry into rich and wealthy families, and his personal obsession is with remodeling and landscaping. While giving a guided tour of Northanger Abbey, the General constantly asks Catherine to compare his home and gardens to those of Mr. Allen, and is always pleased to find that his belongings are larger or more impressive. In her later novels, Austen linked character’s personalities with the particular items they loved. In this early novel, she makes wealth itself the goal and passion of characters like Isabella and General Tilney. (Spark Notes) 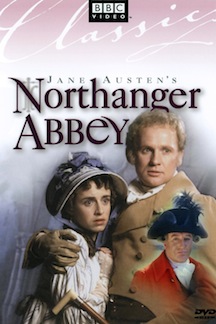 The A&E Network and the BBC released the television adaptation Northanger Abbey in 1986.

An adaptation of Northanger Abbey with screenplay by Andrew Davies, was shown on ITV on 25 March 2007 as part of their “Jane Austen Season”. This adaptation aired on PBS in the United States as part of the “Complete Jane Austen” on Masterpiece Classic in January 2008.

An adaptation of Northanger Abbey stage adaptation by Tim Luscombe, was produced by Salisbury Playhouse in 2009. It is published by Nick Hern Books (ISBN 9781854598370), and was revived in Chicago in 2013 at the Remy Bumppo Theatre.

“Pup Fiction” – an episode of Wishbone featuring the plot and characters of Austen’s Northanger Abbey.

Historical Reference
The book contains an early reference to baseball. (“…Catherine, who had by nature nothing heroic about her, should prefer cricket, baseball, riding on horseback, and running about the country…”). [Fornelli, Tom (6 November 2008). “Apparently Jane Austen Invented Baseball”. AOL News.]

A passage from the novel appears as the preface of Ian McEwan’s Atonement, thus likening the naive mistakes of Austen’s Catherine Morland to those of his own character Briony Tallis, who is in a similar position: both characters have very over-active imaginations, which lead to misconceptions that cause distress in the lives of people around them. Both treat their own lives like those of heroines in fantastical works of fiction, with Miss Morland likening herself to a character in a Gothic novel and young Briony Tallis writing her own melodramatic stories and plays with central characters such as “spontaneous Arabella” based on herself.

Richard Adams quotes a portion of the novel’s last sentence for the epigraph to Chapter 50 in his Watership Down; the reference to the General is felicitous, as the villain in Watership Down is also a General.[Adams, Richard (1975). Watership Down. Avon. p. 470. ISBN 0-380-00293-0. …[P]rofessing myself moreover convinced that the general’s unjust interference, so far from being really injurious to their felicity, was perhaps rather conducive to it, by improving their knowledge of each other, and adding strength to their attachment, I leave it to be settled, by whomsoever it may concern…]

Unless so noted, information in this post comes from the script of Austen’s Northanger Abbey or from  Wikipedia.