Posted on March 15, 2021 by reginajeffers
The Phantom of Pemberley: A Pride and Prejudice Mystery was my sixth Jane Austen book. It was originally released in 2010 by Ulysses Press. As Ulysses no longer publishes fiction stories, I had my rights to the book returned to me. I am re-releasing it to a new audience of Austen fans with a new cover and a bit of updating.
As with many of my author friends, I am more than a bit of a “Jane Austen geek.” I have loved Jane Austen’s works since I was a pre-teen. I also love mystery and suspense. To mix the two was fun.

If he has to kill a thousand men, the Phantom will kill and kill again!

The Phantom of Pemberley is what is known as a “cozy mystery,” along the lines of what one would find with Agatha Christie or Sherlock Holmes. A “cozy” has very specific characteristics: (1) The setting is a country house or small town, customarily without a detective or police or sheriff to assist in discovering the culprit. (2) The murder mystery is a domestic crime, one close to home rather than having far-reaching implications. (3) There is always a gifted amateur who cross examines the suspects and after a clever explanation discloses the guilty person, a person along the lines of mystery writer Jessica Fletcher in the television show “Murder She Wrote.” (4) It generally focuses on solving the mental aspects of the crime (without the assistance of CSI). (5) The “murder” happens off-screen, so to speak. It is spoken of but the reader experiences the violence after the event, rather than reading all the graphic details. (6) Sex and offensive language is kept to a minimum.
So, we open The Phantom of Pemberley to find Darcy and Elizabeth, married for a year and blissfully happy with plans for the future of the Pemberley estate and their marriage. However, we know what happens when we tell God our plans. He has a hearty laugh and sends us a good dose of humility. Enter that humility in the form of the worst snowstorm in a decade. Add the appearances of Lydia Bennet Wickham for a planned visit and of Lady Catherine and Anne de Bourgh, both making an unexpected call at Pemberley, the first since Darcy and Elizabeth’s wedding. Obviously, an eclectic mix requires a bit more than the Austen standard fare. Because of the storm, Lydia invites her fellow traveling companions from the public coach to stay at Pemberley. As readers we meet Nigel Worth, a country solicitor, and Evelyn Williams, a naval widow. Compound the mix of guests at Pemberley with a friend of Colonel Fitzwilliam, Adam Lawrence, the future Earl of Greenwall, who also finds himself stranded in Derbyshire with no place to stay. Therefore, against his better judgment, Darcy accepts Lawrence and Lawrence’s mistress, Cathleen Donnel, at the estate.
You will curse the day you did not do all that the Phantom asked of you!
Snowed in for, at least, a week, Darcy and Elizabeth set about entertaining so varied a guest list, but entertainment becomes a minor problem. First, Elizabeth sees an unknown stranger along one of the fields surrounding the manor house, then Georgiana spots a like figure close to the cottagers’ huts. The Pemberley staff think it the Shadow Man, but even that legend does not explain the unusual thefts about the house, the appearance of a disembodied ghost in Georgiana’s room, a staged accident on the stairs, and a series of what appears to be unconnected murders. What Darcy finds at Pemberley is a “phantom,” who is obviously set on revenge. 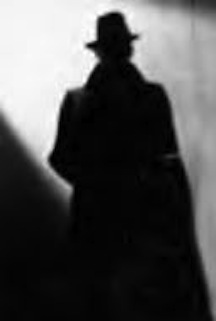 One of the things I enjoy when I write is exploring history and incorporating it into the story line. First, for The Phantom of Pemberley, I used the legend of the Shadow Man or Hat Man, as he is sometimes called. Most cultures have a variation on this legend. The easiest way to explain a Shadow Person is when one thinks he sees someone from the corner of his eye and then turns his head to find nothing. I found it very interesting that Wes Craven spoke of a scary experience with a shadowy creature as a young boy. Some suggest this incident was the inspiration for Freddy Krueger. To read more of Craven’s story and Shadow People go HERE.
Next, discovering creative ways to dispose of the chosen victims was essential. I was very lucky in that women of the Regency era, quite literally poisoned themselves with their beauty products. During this era, white skin signified a life of leisure while skin exposed to the sun indicated a life of outdoor labor. In order to maintain a pale complexion, women wore bonnets, carried parasols, and covered all visible parts of their bodies with whiteners and blemish removers. Unfortunately, more than a few of these remedies were lethal. Into the nineteenth century, ladies used a whitening agent composed of carbonate, hydroxide, and lead oxide, which the body stored with each use, resulting in muscle paralysis or death. By the nineteenth century zinc oxide became widely used as a facial powder, replacing this more deadly mixture. Even in the early 1800s, we must ask the question: What price beauty? (Ideals of Female Beauty in the 1700 and 1800s from Geri Walton)
Hopefully, the red herring is not too obvious for those of you who devour mysteries. I have planned some twists and turns to the story, which I pray will keep it interesting. For example, in The Phantom of Pemberley, I play a bit more with the character of Anne de Bourgh. In Darcy’s Temptations, I gave Anne de Bourgh a life after Darcy’s desertion, but I found I did not like her much afterwards; and I wanted to like Anne. Therefore, in this one Anne finally discovers she has a spine and seeks love in all the wrong places before finding what is important in a relationship: a apt lesson for a woman well on the shelf by Regency standards.
One of the things I found in writing this book is I became quite interested in the character of Adam Lawrence, a very “major” minor character in The Phantom of Pemberley. Lawrence has developed into what Francis Henning is to author Victoria Alexander. He makes an appearance in eleven other of my works.  (Visit Adam’s #SupportingRole post HERE.) Therefore, I have written Adam’s story (His Irish Eve) about what happens to Lawrence in the future, six years after the close of The Phantom of Pemberley.
In dreams, that voice calls to me and speaks my name. And do I dream again? For now I find the Phantom is there, inside my mind. 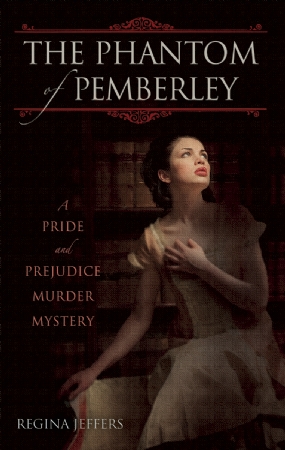 “It is far harder to kill a phantom than a reality.” (Virginia Woolf)

The Phantom of Pemberley: A Pride and Prejudice Murder Mystery

HAPPILY MARRIED for over a year and more in love than ever, Darcy and Elizabeth can’t imagine anything interrupting their bliss-filled days. Then an intense snowstorm strands a group of travelers at Pemberley, and terrifying accidents and mysterious deaths begin to plague the manor. Everyone seems convinced that it is the work of a phantom—a Shadow Man who is haunting the Darcy family’s grand estate.

Darcy and Elizabeth believe the truth is much more menacing and that someone is attempting to murder them. But Pemberley is filled with family guests as well as the unexpected travelers—any one of whom could be the culprit—so unraveling the mystery of the murderer’s identity forces the newlyweds to trust each other’s strengths and work together.

Written in the style of the era and including Austen’s romantic playfulness and sardonic humor, this suspense-packed sequel to Pride and Prejudice recasts Darcy and Elizabeth as a husband-and-wife detective team who must solve the mystery at Pemberley and catch the murderer—before it’s too late.