“Murder of a Bastard Child,” an Historical Crime Against Children

In the 18th Century in England, what was the fate of a child born to a young woman pregnant out of wedlock? Alan Taylor in the British History Georgian Lives Facebook Group tells us, “The most common capital offence for women in the 18th Century was ‘murdering a bastard’- 98 women were hanged for this between 1735 and 1834! The vast majority of these women were in extreme poverty, had been abandoned by their partners and had no where to find shelter and food. Society at that time was very harsh in its judgement to these women condemning them for their immorality and even sending the mother and baby away and therefore denying them poor relief. The story of Elizabeth Harrard is one heartbreaking example. On December 21st 1739 she and nine other condemned men were transported From Newgate prison to Tyburn and there hanged. Her crime was that she had murdered her new born baby and thrown the body into a river. If you read her story in the accompanying article (see link below under NOTE), you will perhaps realise what drove her to this act and how little pity was shown to her in her condition.”

The most famous account of attempted infanticide, in which babies were left exposed to the elements, is the story of Romulus and Remus (Wikimedia Commons)

The Greeks considered infanticide barbaric, but instead of outright killing their babies, they practiced exposure. Exposure would be just leaving the child.it was not considered murder because a passerby or a God could take pity on the child and save it.
In Rome, exposure was common, in a letter from a man to his wife during 1 BC he says:  “I am still in Alexandria. … I beg and plead with you to take care of our little child, and as soon as we receive wages, I will send them to you. In the meantime, if (good fortune to you!) you give birth, if it is a boy, let it live; if it is a girl, expose it.” Another option would be to take the child to the family patriarch and they would decide whether the child should be killed or left to exposure. Usually babies with birth defects were killed. By 374 AD infanticide was illegal in Rome, but offenders were rarely ever prosecuted. Pagan German tribes also practiced a similar exposure to unwanted children. Many were left in the forest without food….this was especially common for children born out of wedlock.

Meanwhile, Christianity abhorred infanticide. In Apostles it was written, “You shall not kill that which is born”. In 318 AD Constantine I felt that infanticide was a crime. In 374 AD Valentinian stated that people must rear all children. The Council of Constantinople issued that infanticide was murder and in 589 AD the Third Council of Toledo worked on ending the Spanish custom of killing their children .

Child sacrifice was common among the Gauls, Celts, and Irish during the Middle Ages. “They would kill their piteous wretched offspring with much wailing and peril, to pour their blood around Crom Cruaich”, a deity of pre-Christian Ireland. But soon abandoning children on the doorsteps of churches and abbeys became more common than exposure. This gave birth to the world’s first orphanages. (History of Infanticide)

For many women delivering an unwanted baby, infanticide was the answer. Humanian speaks to the modern version of this heinous act. “Infanticide is the act of deliberately causing the death of a very young child (under 1 year old). In the past, and in many societies, it was a widespread practice, permitted by different cultures around the world. Nowadays, it is considered to be an unethical crime; however, it is still performed. In some cultures, children are not considered to be human beings until certain ceremonies have been performed (name-giving ceremonies or haircuts for example). Infanticide occurs rarely once those ceremonies have taken place but killing a child before them is not seen as a homicide. Infanticide is usually difficult to report, because in most cases these deaths are covered as stillbirths or children are just not registered at the civil registry after the birth. Indirect or passive infanticide begins with inadequate nutrition, neglect or careless parenting, especially when the baby gets sick. In many societies, especially in the past, infanticide was routinely used as a way to control and regulate the population. As such, it particularly affected female children, since having fewer women meant having a lower rate of reproduction (fewer children).

“Female infanticide is the most common form of infanticide, both nowadays and in the past. This practice is mainly due to the fact that, in some cultures, males are considered to be socially more valuable than women. Moreover, female infanticide is sometimes related to the control of the population. For example, the UN World Report on Violence Against Children conducted among 1,000 women in India revealed that infanticide was the cause of 41% of deaths among newborn girls.

“In China, infanticide is also practiced, mainly due to the one-child policy (even though it existed before), which states that each couple can have only one child. Many parents prefer to have an abortion before the birth, if they know that the child is a girl. However, among people who do not have this possibility, infanticide at birth can be performed. Female infanticide and abortions have caused a great imbalance between the sexes in some regions. In 2007, a UN report estimated that approximately 100 million girls worldwide had disappeared, 80 million of them in China and India. In the future, this could lead to an increase in girls trafficking or to forcing women to marry more than one man.”

A common capital crime in the 1700s in England was that of the murder of a bastard child. These were generally not still births or deaths from disease or some other natural cause. These were purposeful deaths: ones to rid a woman of the child she had never wanted in the first place. We must remember that contraception was not readily available or dependable to the majority of the population. Women accused of the crime had gotten rid of their infant children in a variety of manners: beaten to death, drowned, buried alive, poisoned, cutting their throats, etc. Women of the time, especially those living in poverty, had few resources available to them, and so many took drastic measures to survive.

Capital Punishment UK tells us, “Some seventy nine women were hanged for this crime between 1735 and 1799 and a further nineteen between 1800 and 1834.  The last being twenty four year old Mary Smith who went to the gallows at Stafford on the 19th of March 1834. It is not always possible from surviving records to know whether a child murder fell into this category or not.  Large numbers of women and girls continued to be sentenced to death between 1840 and 1922 for killing their infant children but were all reprieved. It wasn’t until the Infanticide Act of 1922 that the killing of a newborn baby by its mother was no longer classed as a capital crime and factors such as the disturbed mental state of a new mother were permitted to provide a partial defence to a murder charge.  The Infanticide Act of 1938 removed the death penalty altogether for women who killed their babies in their first year of life, stating ‘at the time of the act or omission the balance of her mind was disturbed by reason of her not having fully recovered from the effect of giving birth to the child or by reason of the effect of lactation consequent upon the birth of the child.’ In some cases it was possible to show that a baby had not been born alive and the mother could then be charged with concealment of the birth but this did not carry the death penalty.”

NOTE: The Capital Punishment UK site also discusses four cases of the murder of bastard children, those of Elizabeth Harrard, Sarah Jones, Ann Statham and Hannah Halley, if you are interested in how the law treated such cases.  I chose not to detail the cruelty here. 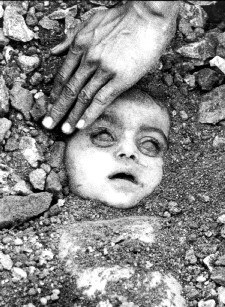 The Encyclopedia of Death and Dying tells us, “Most societies agree that the drive to protect and nurture one’s infant is a basic human trait. Yet infanticide—the killing of an infant at the hands of a parent—has been an accepted practice for disposing of unwanted or deformed children since prehistoric times. Despite human repugnance for the act, most societies, both ancient and contemporary, have practiced infanticide. Based upon both historical and contemporary data, as many as 10 to 15 percent of all babies were killed by their parents. The anthropologist Laila Williamson notes that infanticide has been practiced by nearly all civilizations. Williamson concludes that infanticide must represent a common human trait, perhaps genetically encoded to promote self-survival.

The Discovery of a Mass Baby Grave Under a Roman Bathhouse