The Significance of Birth Order in Jane Austen’s Novels, a Guest Post from Eliza Shearer

Posted on December 16, 2020 by reginajeffers

Jane Austen was born on December 16, 1775, “the seventh of eight children of a clergyman in a country village in Hampshire, England. Jane was very close to her older sister, Cassandra, who remained her faithful editor and critic throughout her life. The girls had five years of formal schooling, then studied with their father. Jane read voraciously and began writing stories as early as age 12, completing a novella at age 14.” (This Day in History)

This post originally appeared on Austen Authors on June 25, 2019. Let us determine whether Austen herself fits the mold. Enjoy! 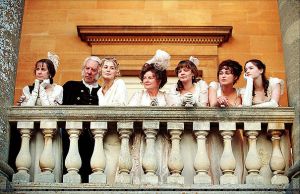 Birth order has an impact on your personality and behaviour, according to many psychologists. Some of the stereotypes related to sibling birth order have primarily been confirmed by scientific studies, but at Jane Austen’s time, such observations would have remained anecdotal only.

Whether you trust said studies or not, it is worth checking out what this observant writer, so talented at describing human emotions, behaviours and interactions, made of the supposed characteristics of children born in the same family, depending on their birth order.

Firstborns, the Responsible Ones?

When it comes to firstborns, stereotypes abound. Because they enjoy the attention of both parents, firstborns are supposedly born leaders, conscientious and responsible achievers, and at the same time tend to be overly cautious, perfectionists and even controlling.

Some of Jane Austen’s characters who are firstborns neatly fit in this category, and you need not look further than collected Elinor Dashwood of Sense and Sensibility, always so organised and responsible (Mrs Dashwood definitely wasn’t a firstborn!). Charlotte Lucas of Pride and Prejudice, who opts for financial security in the shape of a marriage of convenience rather than becoming a burden for her family, is another sensible older sibling.

Mr Darcy in Pride and Prejudice and Mr Knightley in Emma are further examples of firstborn children whose diligence and sense of responsibility for the lives of others are acute, and who respect their elders and want to be the best at everything they do. But this attitude is not always laudable, in Jane Austen’s opinion: Sense and Sensibility‘s Edward Ferrars has such a warped sense of honour that he is prepared to marry a silly woman simply because he promised to do so as a bored young man.

Not all firstborns fit the idealistic picture of duty and respectability. Elizabeth Elliot, Anne’s eldest sister in Persuasion, is selfish, hedonistic, snobby and full of her own firstborn privilege as the eldest Elliot daughter. Tommy Bertram of Mansfield Park is charming and fun, but also thoughtless, even callous, to the point that his spending habits put his brother Edmund’s inheritance and future happiness in jeopardy.

At the other end of the spectrum, we find the baby of the family. Youngest children are supposed to have benefited from their parents’ increasingly lax approach to parenting, especially if there are several siblings between them and the firstborn. They are often accused of being attention-seekers, but on the plus side, they tend to behave in uncomplicated, spontaneous ways.

Lydia Bennet, Elizabeth’s baby sister in Pride and Prejudice, is the Austen character that most closely fits the stereotype. She is fun-loving and outgoing, but also self-centred and manipulative. Lydia elopes with the man she wants without thinking of the consequences. Marrying without parental consent was a severe affront to the family, and therefore a rare occurrence, but interestingly, Mansfield Park’s Julia Bertram, who also elopes, happens to be the youngest Bertram sibling.

To find out what happens when freedom-loving youngest children acquire responsibilities, look no further than Mary Musgrove, the youngest Elliot sister in Persuasion. Mary has a knack for getting others (particularly her sister Anne) to stand in for her when it comes to dealing with the less unpleasant aspects of being a grown-up, such as having to miss out on social occasions on account of sick children.

Amongst the men, there is perhaps a no better example of a spoilt youngest child in Austen’s novels than the foolish Robert Ferrars, Edward Ferrars’ younger brother in Sense and Sensibility. The first time Elinor meets him, at a jeweller’s, he is buying a fancy and ridiculously expensive toothpick case. Need I say more?

What about the children who fall in the middle in sibling birth order? It turns out that they are a bit of a mystery and can turn out either way. In some cases, their behaviour is close to what one might expect from the stereotypical older sibling. Mansfield Park’s Edmund Bertram is a man of honour who cares about those less privileged than himself and is prepared to forfeit their future happiness because of a higher sense of morality. He will not contemplate not going into the church, as is his vocation, even if this means renouncing the woman he loves.

Anne Elliot of Persuasion is another example of a middle child behaving in a far more sensible way than her elder siblings. She is also a bit of a loner, a trait that she shares with Mary Bennet, the middle child in Pride and Prejudice. Poor Mary is definitely the odd one out amongst the Bennet sisters, not just because she isn’t as pretty as the rest of them, but also because the other four are so clearly paired off from the beginning.

There are also instances of middle children who refuse to blend into the familial background and stand out to find a place within the family. In Sense and Sensibility, Marianne Dashwood is not exactly a wallflower, drawing attention to herself at every possible occasion. In Pride and Prejudice, spirited Elizabeth Bennet is her father’s favourite and the most magnetic of all five sisters.

All in all, I am sure that Austen would have agreed with Dr Kevin Leman, a psychologist who has studied birth order for decades, who said that “the one thing you can bet your paycheck on is the firstborn and second-born in any given family are going to be different.”

What do you make of Austen’s depiction of birth order and the impact it has on the personalities of her characters? Do you identify as one character in particular?