“Bell, Book, and Candle” and Excommunication During the Georgian Era

Posted on September 18, 2019 by reginajeffers

In the Roman Catholic church, “bell, book, and candle” came to be synonymous with “major excommunication,” or “anathema.” The phrase dates back to the 9th Century and has symbolic meaning. The “bell” came to mean the public character of the action taken by the church and its presiding bishop against the one to be excommunicated. The “book” represented the church’s authority over the person charged. The “candle” represented the hope of the ban eventually being lifted, through the person’s repentance and an open show of having changed his ways. The ceremony would be a very public one, and the bishop would write letters to other bishops to report the fact. In that manner, the person could not simply up and move himself into another “see,” the area of a bishop’s ecclesiastical jurisdiction.

In the traditional ceremony, the bishop and 12 priests would preside, each carrying a lighted candle. “The bishop, wearing violet vestments, then recited the formula, ending thus: ‘We separate him, together with his accomplices and abettors, from the precious body and blood of the Lord and from the society of all Christians; we exclude him from our holy mother the church in heaven and on earth; we declare him excommunicate and anathema; we judge him damned, with the devil and his angels and all the reprobate, to eternal fire until he shall recover himself from the toils of the devil and return to amendment and to penitence.’ Those present answered, ‘So be it!’ Then the bishop and the 12 priests extinguished their candles by dashing them to the ground, and, as a general rule, the ceremony then ended.” [Bell, Book, and Candle]

A form of ecclesiastical censure, what we call excommunication excludes a person from the communion of believers, the rites or sacraments of a church, and the rights of church membership. Sometimes the governing body goes so far as exclusion.

The Roman Catholic Church distinguishes between two kinds of excommunication. In the first kind, the person is termed to be “toleratus,” or tolerated. The second form is more severe. The person is termed “vitandus,” or one to be avoided. The person is announced by name in a public “shaming,” generally at the See, itself, but for the gravest of crimes, this could take place at the Vatican. The accused is barred from the church sacraments, as well as Christian burial. The Catholic Church has a specified list, set out in the Codex Juris Canonici, of actions that end in excommunication. In January 1983, Pope John Paul II revised the list to “include abortion, violation of the confidentiality of confession, absolution by a priest of one who has committed a sin with the priest’s assistance, profanation of the consecrated communion host, consecration of a bishop without Vatican approval, a physical attack on the pope, and heresy and ‘abandoning the faith.’

“If excommunicated persons confess their sins and undergo penance, they are absolved; in some cases this absolution may come from any priest, but in many others it is reserved to the bishop or even to the Holy See alone, save in periculo mortis (‘in danger of death’). Excommunication should be distinguished from two related forms of censure, suspension and interdict interdict [a remedy granted by a magistrate on the sole basis of his authority, against a breach of civil law for which there is no stipulated remedy. Interdicts can be provisionary, opening the way for further action or final.] Suspension applies only to clergy and denies them some or all of their rights; interdict does not exclude a believer from the communion of the faithful but forbids certain sacraments and sacred offices, sometimes to an entire area, town, or region.” [Excommunication]

Various churches handle the situation differently. In fact, some churches do not use the term excommunication, preferring to speak of church discipline. Reformed churches vest the authority for exercising discipline and, if need be, carrying out excommunication, in the session, which consists of the minister and the elders. The 30th article of the Westminster Confession of 1646 specified ‘admonition, suspension from the sacrament of the Lord’s Supper for a season, and excommunication from the church’ as the proper steps of discipline. The Lutheran tradition has followed Martin Luther’s catechism in speaking of ‘the power of the keys’ and in defining excommunication as the denial of the communion to public and obstinate sinners; the clergy and the congregation together have the right to exercise such discipline. In the Anglican Church the bishops have the right to excommunicate, but this right is almost never exercised. Where a Congregational polity and the principle of ‘believers’ Baptism’ are observed, discipline is often very rigorous. In American denominations of the Free Church tradition the term ‘churching’ a sinner refers to excommunication, while in the Mennonite-Amish tradition excommunication also entails social ‘shunning.’ [Excommunication]

During the Georgian Era, in which most of my books occur, two types of excommunication existed: Lesser and greater.

Some changes were made in 1813, which allowed the ecclesiastical courts to send people to the secular courts for contempt, instead of excommunicating them. Also, offense of church rites and tithes were to be sent to the secular courts instead of through excommunication. In such cases, one simply deprives the offender of church services and sacraments–including marriage and a Christian burial. This is pronounced in those who are obstinate and disobedient, such as not appearing at church court when summoned, not submitting to a penance, or not obeying another injunction of the court.

The Doctrine of the Trinity Act 1813 (53 Geo. III c. 160. sometimes called the Trinitarian Act 1812) was an Act of the Parliament of the United Kingdom. It amended the Blasphemy Act of 1697 in respect to it Trinitarian provisions. The Blasphemy Act applied only to those educated in or having made profession of the Christian religion. The Act, passed July 21, was also variously known as the Unitarian Relief Act (Trinity Act), The Unitarian Toleration Bill, and Mr William Smith’s Bill, after Whig politican William Smith. The Act granted toleration for Unitarian worship, as previously the Toleration Act 1689 had only granted toleration to those Protestant dissenters who accepted the Trinity. [Note! The Blasphemy Act was repealed in 1967, implicitly taking the Doctrine of the Trinity Act with it.] 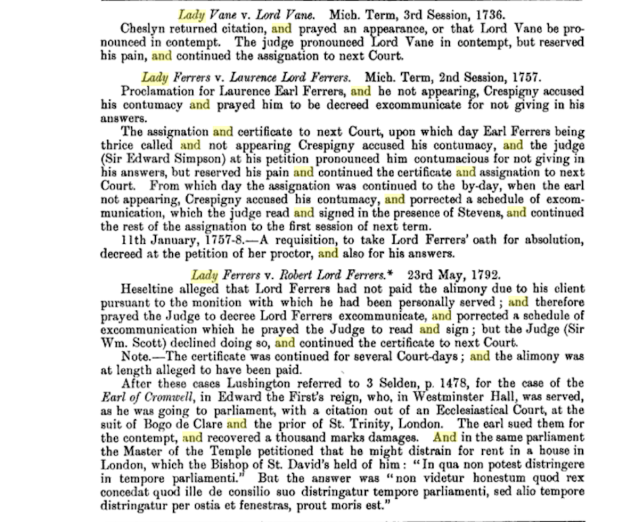 As one can see, there were several incidents brought for excommunication against gentlemen of the Realm. For example, Lady Ferrers went to the House of Lords to request a separation from her husband the earl. She told the HOL members that her husband had no fear of the church courts or of being excommunicated so she feared he would not allow her to live in peace apart from him.

Cheslyn returned citation and prayed an appearance, or that Lord Vane be pronounced in contempt. The judge pronounced Lord Vane in contempt, but reserved his pain, and continued the assignation to next Court

Proclamation for Laurence Earl Ferrers, and he not appearing, Crespigny accused his contumacy and prayed him to be decreed excommunicate for not giving in his answers.

The assignation and certificate to next Court, upon which day Earl Ferrers being thrice called and not appearing Crespigny accused his contumacy, and the judge (Sir Edward Simpson) at his petition pronounced him contumacious for not giving in his answers, but reserved his pain and continued the certificate and assignation to next Court. From which the assignation was continued to the by-day, when the earl not appearing, Crespigny accused his contumacy, and porrected a schedule of excommunication, which the judges read and signed in the presence of Stevens, and continued the rest of the assignation to the first session of next term.

11 January, 1757-8. — A requisition to take Lord Ferrers’ oath for absolution at the petition of her proctor, and also for his answers.

Note.  — The certificate was continued for several Court-days; and the alimony was at length alleged to have been paid.

The greater excommunication deprived the man of church services and published his name abroad so that no church members who wanted to stay in good standing or have any communication or business with him. The church members were not to patronize the man’s shop, if he were a tradesman. He was not to be invited to dine or to visit or to attend a ball. One was supposed to shun his society until he repented.

2 Responses to “Bell, Book, and Candle” and Excommunication During the Georgian Era