The Letters and Diaries of Henrietta Liston, a Regency Lady with an Extraordinary Life, a Guest Post from Eliza Shearer

(This post originally appeared on the Austen Authors’ blog on November 3, 2018. Enjoy!)

I recently had the pleasure of attending a meeting of the Jane Austen Society of the United Kingdom – Scottish Branch, featuring a fascinating talk by Dora Petherbridge, curator, at the National Library of Scotland. The subject of Ms Petherbridge’s lecture was Henrietta Liston, a keen diarist and letter writer, a contemporary of Jane Austen and a woman destined to become a perceptive witness and reporter of a period of profound transformation.

Henrietta Marchant was born in the West Indies to a Scottish family. Her parents died when she was just a girl, and she and her brothers moved to Glasgow to live with their uncle and aunt. The uncle worked in trade, the family were reasonably comfortable, and the children received a good education, one that would feed Henrietta’s natural gifts of observation and writing.

After reaching the matronly age of 44 unmarried, in 1796 she received a marriage proposal from Robert Liston, a family friend who had had a meteoric career in the British diplomatic service. Robert had just been appointed British Minister to the United States of America, with the mission to help repair the relationship with the former colony.

It was a delicate time for British-American relations. Diplomatic relations between both countries were barely a decade old, and Robert Liston was only the third top-ranking envoy to represent Britain in the US. The position required someone with diplomatic experience and a discerning mind, which Mr Liston undoubtedly possessed. However, there was something else that Robert needed.

To paraphrase Jane Austen, a newly-appointed ambassador in possession of a prominent post abroad must be in want of a wife. Robert thought that Henrietta would make the perfect companion, so they married and immediately sailed for New York, from where they would travel extensively, visiting Philadelphia, southern Canada, Virginia and the Carolinas amongst other places (there is a detailed map of their travels here).

Throughout their journeys, while Robert dutifully sent rather dull dispatches to London, Henrietta wrote letters to friends and family and kept several journals describing her impressions of life in the young United States of America. Happily, her words were very different from her husband’s. Informed, spirited and witty, in her writing Henrietta brings to life her new surroundings, with detailed descriptons of landscapes, social customs, food and drink, as well as her encounters with prominent Americans. Her style often brings Austen’s style to mind, and indeed, it is very likely that Henrietta read Austen at some point.

Without a doubt, the Listons’ social talents did much to improve the relations between Britain and its former colony. It probably helped that they were not part of the aristocracy, and therefore more likely to have things in common with the Republican spirit of the Americans they encountered. Robert had grown up a farmer, a common occupation amongst American politicians, and Henrietta was very much a people person, which made her popular in society.

The Listons and the Washingtons

Henrietta met everyone worth knowing at the time in America. Her letters and journals are full of household names, and she provides thorough accounts of her encounters and her impressions on the individuals concerned. For example, she is charmed by Alexander 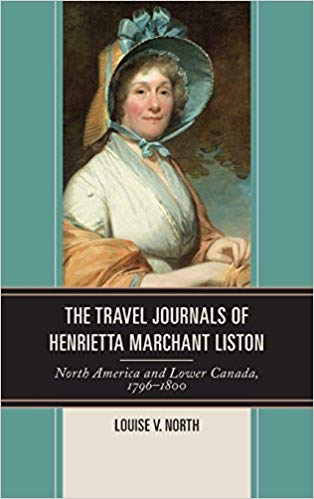 Hamilton, as ladies often were, but does not like Thomas Jefferson much. The Listons also met George Washington and his wife, Martha, and became good friends.

This last relationship is particularly touching. Henrietta writes about Washington extensively in one of her diaries, providing a fascinating, first-hand account of one of the most important figures in the history of the United States. The Listons attended the funeral, and Henrietta paid a ‘melancholy visit’ to a mourning Martha Washington afterwards, of whom she writes:

‘… we found this excellent woman grieving incessantly. She repeatedly told me, during the few days we had it in our power to stay with her, that all comfort had fled with her husband, and that she waited anxiously her dissolution; and indeed it was evident that her health was fast declining and her heart breaking. We parted with much tenderness on all sides, never alass [sic]! to meet again.’

Life After the US

The Listons left the United States in 1800, but their American experience remained with them until the end of their lives. Back in Scotland, Henrietta carefully built an American garden where she planted the botanical specimens she had gathered during her travels in the United States. To this day, the couple are credited with preparing the foundations of the special bond that would develop between the United States and the United Kingdom.

Later, the Listons moved on to Hague, Copenhagen and Constantinople, the seat of the mighty Ottoman empire. Henrietta continued to write letters and journals, leaving a direct and inquisitive account on a world undergoing profound change. She also grew her extensive network and even had an Austen connection: she corresponded with Captain Charles Austen, whom Jane Austen refers to as “our own particular little brother” in a 1799 letter to Cassandra. One of Charles’ missives is part of the Liston archive at the Scottish National Library.

As significant as Henrietta’s letters and journals are, their study is still very much a work in process. Thanks to an extensive digitisation effort, many of them are already accessible online, but there is still much to be discovered. I very much hope that Ms Petherbridge and her colleagues will continue their invaluable work to disseminate the work of a remarkable woman who lived through extraordinary times, never missing an opportunity to report on what she saw and experienced.