Colchester and Colchester Castle, Oldest Recorded Town and the Largest Keep in England 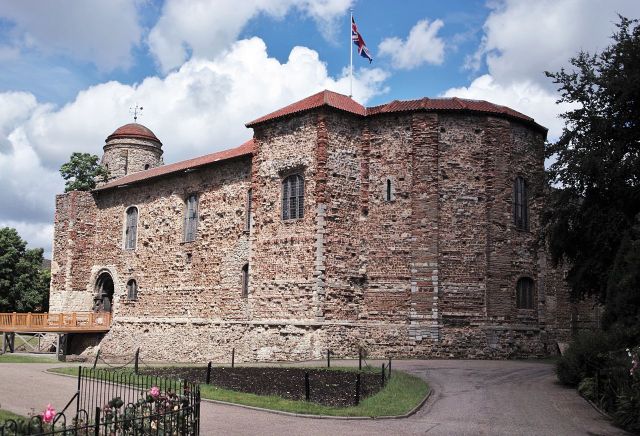 Colchester, some 50 miles northeast of London, is an historic market town in the county of Essex. As the oldest recorded Roman town in Britain, Colchester is claimed to be the oldest town in Britain. For a time, it was the capital of the kingdom of Cunobelin (Roman Britain). It was called Camulodunum and was reduced to ashes by Queen Boadicea in AD 60. The town was rebuilt by the Romans, but by then, Londinium was the capital. With the Romans departure, the Saxons renamed the town Colchester. In the 11th Century, the Normans built the largest keep ever constructed in Europe on top of the Roman temple of Claudius. Colchester Castle  is the largest castle in England. 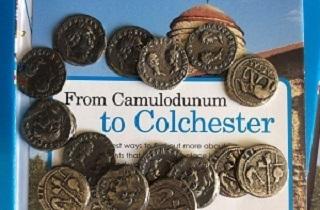 Pliny the Elder, who died in AD 79, mentions Colchester, which is why many consider it the oldest town in Britain. However, the Celtic name, Camulodunon, appears on coins minted by Tasciovanus, a tribal chief, from 20-10 BC. Shakespeare knew the town, not as Cunobelin, but as Cymbeline, King of the Catuvellauni (c. 5 BC to 40 AD). Coins of his reign also exist. Shakespeare’s Cymbeline was the father of Caratacus, leader of the earliest resistance agains the Roman invasion. Supposedly, Caratacus was enchained and sent to Rome, where he was paraded as a Roman enemy through the city. However, his silent dignity and courage earned him Caesar’s recognition. Caratacus was released to live in Rome as a free man. Colchester Celtic name, Camulodunon, also appears on coins during the 30s AD. Camulodunon controlled a large section of Southern and Eastern Britain at the time. Camulodunon is considered one of the possible sites of the legendary Camelot of King Arthur tales.

Medieval Colchester’s main landmark is Colchester Castle, which is an 11th-century Norman keep, and built on top of the vaults of the old Roman temple. There are notable medieval ruins in Colchester, including the surviving gateway of the Benedictine abbey of St John the Baptist and the ruins of the Augustinian priory of St Botolph. In 1189, Colchester was granted its first royal charter by King Richarch I. The charter was granted at Dover with the king about to embark on one of his many journeys away from England. Colchester developed rapidly during the later 14th century as a centre of the woollen cloth industry and became famous in many parts of Europe for its russets (fabrics of a grey-brown colour). This allowed the population to recover financially from the effects of the Black Death, causing many who sought work to migrate there.

Between 1550 and 1600, a large number of  weaver and cloth makers from Flanders emigrated to Colchester and the surrounding areas. They were famed for the production of “Bays and Says” cloths which were woven from wool and are normally associated with Baize and Serge although surviving examples show that they were rather different from their modern equivalents

A mid-17th century English ditty (a short, simple popular song)—much quoted in histories of ale and beer brewing in England—refers to 1525 as the year:

Hops, heresies, bays, and beer;
Came into England all in one year.

Heresies refers to the Protestant Reformation, while bays is the Elizabethan spelling for baize. Baize is most often used on snooker and billiards tables to cover the slate and cushions and is often used on other kinds of gaming tables such as blackjack, baccarat, craps, and casino games. It was popular in the 19th Century on the writing surface of a pedestal desk. (Baize, Wikipedia) “I have covered my old carpet with a handsome green baize, and every stranger who comes to see me, I observe, takes it for granted that I have a rich carpet under it.” (From novel by Maria Edgeworth (1968-1849), “Belinda” published 1801.)

Meanwhile, serge is a type of twill fabric that has diagonal lines on both side, made with a two-up, two-down weave. Worsted serge is used for military uniforms, suits, great coats, and trench coats. Silk serge is used for linings. Serge can also be used for a woollen fabric. The early association of silk serge, Greece, and France is shown by the discovery in Charlemagne’s  tomb of a piece of silk serge dyed with Byzantine motifs, evidently a gift from the Byzantine Imperial Court in the 8th or 9th century AD. It also appears to refer to a form of silk twill produced in the early renaissance in or around Florence, used for clerical cassocks. A reference can be found in Don Quixote: “I am more pleased to have found it than anyone had given me a Cassock of the best Florentine serge” (The Curate, Book I, Chapter VI). [“Colchester Archaeological Trust Online Report Library – Colchester Bays, Says and Perpetuanas by Eliot Howard” (PDF). essex.ac.uk.]

From early Saxon times, most English wool (“staples”) was exported. In the early 16th century it went mainly to an English owned Royal monopoly in Calais, where it was woven into cloth by Low Country cloth makers.  The French captured Calais in January 1558. With that, England expanded their own weaving industry. The Eighty Years’ War and the French Wars of Religion (1567) sent Calvinist refugees from the Low Countries searching for a new home. Many skilled serge makers sought refuge in England. Huguenot refugees in the early 1700s added to the skilled workers streaming into Colchester and like English towns.  (Serge, Wikipedia)

An area in Colchester town centre is still known as the Dutch Quarter and many buildings there date from the Tudor  period. During this period Colchester was one of the most prosperous wool towns in England, and was also famed for its oysters. (A P Baggs; Beryl Board; Philip Crummy; Claude Dove; Shirley Durgan; N R Goose; R B Pugh; Pamela Studd; C C Thornton (1994). Janet Cooper; C R Elrington, eds. “The Borough of Colchester”. A History of the County of Essex: Volume 9: The Borough of Colchester. Institute of Historical Research.) Flemish refugees in the 1560s brought innovations that revived the local cloth trade, establishing the Dutch Bay Hall for quality control of the textiles for which Colchester became famous. The old Roman wall runs along Northgate Street in the Dutch Quarter.

The place of the execution of Charles Lucas and George Lisle. ~ Public Domain ~ https://en.wikipedia.org/wiki/Colchester#/media/File:Lucas_and_Lise.jpg

In the reign of “Bloody Mary” (1553-1558) Colchester became a centre of Protestant “heresy” and in consequence at least 19 local people were burned at the stake at the Castle, at first in front, later within the walls. They are commemorated on a tablet near the altar of St Peter’s Church. (Sources– John Foxe “Book of Martyrs”; Mark Byford: The Process of Reformation in a Tudor Town).

Colchester is reputed to be the home of three of the best known English nursery rhymes: ‘Old King Cole,’ ‘Humpty Dumpty,’ and and ‘Twinkle, Twinkle Little Star’, although the legitimacy of all three claims is disputed.(A P Baggs; Beryl Board; Philip Crummy; Claude Dove; Shirley Durgan; N R Goose; R B Pugh; Pamela Studd; C C Thornton (1994). Janet Cooper; C R Elrington, eds. “The Borough of Colchester”. A History of the County of Essex: Volume 9: The Borough of Colchester. Institute of Historical Research.

Local legend places Colchester as the seat of  King Cole (or Coel) of the rhyme Old King Cole, a legendary ancient king of Britain. In folk etymology the name Colchester was thought of as meaning Cole’s Castle, though this theory does not have academic support. In the legend Helena, the daughter of Cole, married the Roman senator Constantius Chlorus, who had been sent by Rome as an ambassador and was named as Cole’s successor. Helena’s son became Emperor Constantine I. Helena was canonised as  Saint Helena of Constantinople and is credited with finding the true cross and the remains of the Magi.  She is now the patron saint of Colchester. This is recognised in the emblem of Colchester: a cross and three crowns. The Mayor’s medallion contains a Byzantine style icon of Saint Helena. A local secondary school – St Helena’s – is named after her, and her statue is atop the town hall, although local legend is that it was originally a statue of Blessed Virgin Mary which was later fitted with a cross.

Colchester is also the most widely credited source of the rhyme Humpty Dumpty. During the siege of Colchester in the Civil War, a Royalist sniper known as One-Eyed Thompson sat in the belfry of the church of St Mary-at-the-Walls (Humpty Dumpty sat on the wall) and was given the nickname Humpty Dumpty, most likely because of his size, Humpty Dumpty being a common insult for the overweight. Thompson was shot down (Humpty Dumpty had a great fall) and, shortly after, the town was lost to the Parliamentarians (all the king’s horses and all the king’s men / couldn’t put Humpty together again.) Another version says that Humpty Dumpty was a cannon on the top of the church. The church of St Mary-at-the-Walls still retains its Norman tower until the top few feet, which are a Georgian repair.

The third rhyme said to have come from Colchester is Twinkle, Twinkle Little Star, which was written by Jane Taylor, who lived in the town’s Dutch Quarter and published the poem as “The Star” in 1806.