A Gest of Robyn Hode, a Robin Hood Folk Ballad

A Gest of Robyn Hode

A Gest of Roby Hode has been known by a variety of of titles. It is one of the earliest Robin Hood stories, likely written in the late 1400s. It is about 14,000 words in length.

A “gest,” according to Dictionary.com, means a tale of adventures; especially :  a romance in verse; an adventure, exploit, or knightly gests.

Wikipedia provides us a brief overview of the tale. “A Gest of Robyn Hode” is Child Ballad 117; it is also called A Lyttell Geste of Robyn Hode in one of the two oldest books that contain it. It is one of the oldest surviving tales of Robin Hood [and] shows every sign of having been put together from several already-existing tales. It is a lengthy tale, consisting of eight fyttes, or sections. It is a ballad written in Middle English.” 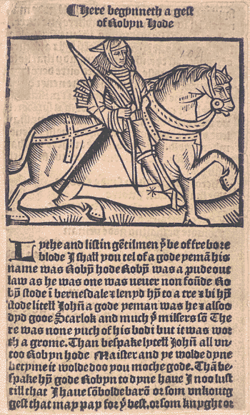 Bold Outlaw breaks down the “fyttes” as follows: “The Gest is divided into eight sections, known as Fyttes. Here’s a breakdown of the main action….

“Fytte 1 — Robin wants to have a guest before they eat. Little John finds a poor knight in threadbare clothing. The knight’s son killed someone in a joust and the knight had to borrow 400 pounds from St. Mary’s Abbey, York to pay the bail. Now, the loan is due, and the knight doesn’t have the money and will lose his lands. Finding him to be honest, Robin loans him the money and gives him fine clothing. He sends Little John along with the knight.

“Fytte 2 — The abbot of St. Mary’s and others are eager to seize the knight’s land. The knight shows up and pretends to be broke. They show no mercy. And therefore, when the knight pays up he doesn’t give them a tip. The knight returns home, collects the money, and makes a gift of fine bows and arrows, to repay Robin. On his way to Barnsdale (Robin’s base), he is delayed to help a yeoman in a wrestling match.

“Fytte 4 — Waiting for the knight to return his loan, Robin and his men intercept the high cellarer of St. Mary’s abbey. The monk is rude and dishonest, and so Robin robs him of 800 pounds, claiming the virgin Mary has sent this payment. When the knight does show up, Robin gives him another 400 pounds.

“Fytte 5 — The Sheriff of Nottingham holds an archery contest for a gold and silver arrow. Robin wins the contest. But his men are ambushed, Little John is wounded, and they take refuge at the castle of the knight (now called Sir Richard at the Lee).

“Fytte 6 — The sheriff goes to the king for help, and returns to capture Sir Richard. Sir Richard’s wife goes to Robin for help. Robin rescues the knight, kills the sheriff and flees to the forest.

“Fytte 7 — Planning to deal with Robin personally, the king goes to the forest disguised as an abbot. He makes friends with Robin. They have an archery contest which Robin loses. The knight discovers the king’s true identity. Robin enters the king’s service.

“Fytte 8 — The king and his men disguise themselves as outlaws and go to Nottingham. Robin serves the king for 15 months. Broke and bored, he returns to Barnsdale, reforms the band, and they stay as outlaws for 22 years. Robin is bled by his cruel cousin, the Prioress of Kirklees, and dies.”

As one can easily assume, latter ballads are based on the Gest.

Bold Outlaw goes on to say, “Historians, such as John Bellamy, continue to focus on the Gest in their attempts to find an original Robin Hood. The description of Robin’s Yorkshire haunts is unusually specific. (Sherwood Forest is never mentioned in the Gest.) There is much debate about when the story is set.

“And there’s much debate over which Edward the king is meant to be. In the early 19th century, Joseph Hunter found the king’s journey in the Gest is similar to that of Edward II’s. There was even a Robyn Hood serving as a porter in this king’s court. However, other details point to the reign of Edward III. Professor Stephen Knight stated in his 1994 study of Robin Hood that the king may have been Edward IV, who was likely the king at the time of composition.

“But Professor Thomas Ohlgren has recently shown that the Gest may be have performed for the cloth guilds that were founded in the reign of Edward III. Ohlgren shows there are a lots of references which make Robin sound like a cloth merchant of Edward III’s day. Even the food Robin serves his guests is taken from the guild menus where this story may have originally been read. At a 2003 conference, Ohlgren revised his opinion and felt that the king in the Gest may have been a combination of Edwards III and IV, as if asking the current king to act like his famous predecessor.”

“Some of the incidents in Fouke fitz Waryn and A Gest of Robyn Hode are, for example, too close to be accounted for by ‘common tradition’ or coincidence — the game of truth and consequences by which those who lie are robbed, while those who tell the truth keep their money; the trick of enticing the enemy into a forest trap by promising him a long-horned stag; the captured king or sheriff swearing an oath not to harm the outlaw and then breaking it; and the wounded sidekick begging the hero to kill him by cutting off his head.”
— A Book of Medieval Outlaws: Ten Tales in Modern English, edited by Thomas H. Ohlgren, p. 111.

The Earliest Editions of the Gest

“Gest of Robyn Hode” in Traditional English You Tube

1 Response to A Gest of Robyn Hode, a Robin Hood Folk Ballad