“X” Does Not Always Mark the Spot

Counting and numbers actually are distracting. It exercises the other side of my brain, and on this particular day, I had hit a wall with my new novel. I had three possible scenarios for an ending, and I could not make up my mind, which one would play out the best. Needless to say, choosing the ending affected the events I would include early on in the storyline. My writing was at a stand still. After seven years of cranking out novels, I have learned that I cannot force the story line. I must simply wait it out. Eventually, I will have that “aha” moment where what was so “obvious” reveals itself. (Usually in the form of a 4 A.M. wake-up call.) Therefore, I turned my attention to the post I had yet to write for my own blog.

One of the things I discovered some time ago, especially when I worked on my “Do You Speak Jane Austen?” series was that there are no words that begin with “x” in Austen’s novels. I took that as a personal challenge and added “x” words to my Christmas at Pemberley when the house guests were playing a parlor game called “I have a basket.”

“There is no word for ‘X'” Bingley protested.

Edward corrected, “There is a xebec.”

From where he sat, Darcy added “Xylem, Bingley. It’s a woody plant.”

“Xiphi. A sword,” Elizabeth added. “It is one of my favorite Greek roots.

“One could always use Xanthippe,” Georgiana said softly.

Bingley laughed lightly. “Point well taken, everyone. I should not play word games with those who devour books.”

I wanted to find a word or two in Austen’s writings that began with the letter “X.” I was soon to discover that “X” as the beginning letter was quite elusive. I scanned Pride and Prejudice, Sense and Sensibility, and Mansfield Park. No “X” words were to be found. However, that doesn’t mean that our Jane never used the letter. On the contrary, 158 different words containing the letter “X” are used within Pride and Prejudice alone. 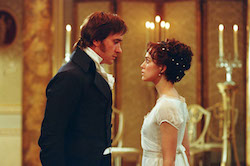 Another thing I noted (minus the deep scientific study I should have executed) is that Austen seems to use the number “six” quite often in her writing. In Pride and Prejudice, she used “six” ten times, “sixth” once, and “sixteen” seven times. I laughingly told myself it was because our dear Jane had to handwrite her stories (which you might recall is an act in my writing process) and “six” is much shorter to write than say “seven” or “eight.” That reasoning died away when I thought of the words “one,” “two,” and “ten.” Perhaps, “six” was Austen’s lucky number. After all, in Mandarin, “six” is good for business and can mean happiness. Did our Jane anticipate her literary success by using the number “six” often? Yes, it is used multiple times in Sense and Sensibility also. Or, mayhap, I am simply looking for a good story behind all this counting.

My mathematical brain is now assuaged. (Did I ever tell you that I began college as a math major? Eventually, I switched to language arts, and the rest is history.) Hopefully, some of you are also both right and left brained and can understand my need to be whole brained in my daily life. If not, you will continue to see me as quite eccentric. [By the way, if one is looking for more delicious Jane Austen words, check out the Jane Austen Thesaurus (http://writelikeausten.com/).]

9 Responses to “X” Does Not Always Mark the Spot