Life of the Gentry in the Regency Period

Posted on February 22, 2016 by reginajeffers

During the Regency Period, wealth and social class separated the English citizenry. Beginning with the Royals, citizens found their place based on birthright and wealth. The nobility stood above the gentry, who stood above the clergy, who stood above the working class, etc. As part of the gentry, Jane Austen’s family held certain privileges, but also lacked political power. Although he was a rector, the Reverend George Austen was a “gentleman,” meaning man of the gentry class. Austen’s novels are populated with those of the gentry. Occasionally, her readers encounter the nobility, as in Lady Catherine De Bourgh and the Dowager Viscountess Dalrymple or the clergy as with Mr. Collins or Mr. Elton.

Good manners defined a person during the era. Loosely based on Renaissance Italy and 17th Century French customs, the “rules” of engagement during the Regency Period were strictly enforced by members of the “ton.” One who did not adhere to the rules would be shunned by Society.

A gentleman, for example, was expected to speak properly and to avoid vulgarity; to be dressed appropriately; to dance well; to be well versed on a variety of subjects and to have a university education or above; and to practice condescion to those of a lower class.

When addressing women the eldest daughter in a family would be referred to as “Miss” + her last name (i.e, Miss Elliot or Miss Bennet). The younger sisters would be “Miss” + the woman’s given name (i.e, Miss Anne or Miss Elizabeth). Addressing males followed a similar form. The eldest son was “Mister” + last name (i.e, Mr. Ferras or Mr. Wentworth). The younger sons used both given name and surname (i.e., Mr. Robert Ferras or Mr. Frederick Wentworth). 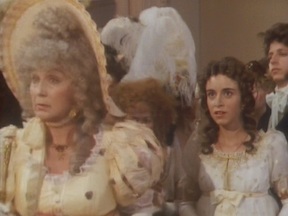 People of lower rank were expected to wait to be introduced to someone of a higher rank. (Do you recall Catherine Morland and Mrs. Allen at Bath? They must wait for an introduction to Henry Tilney, who calls upon the evening’s master of ceremonies to do the deed.) Women of the period were to be obedient to their fathers and husbands, docile and without opinions, have refined qualities, and attendant to their families. Education was not a prerequisite for women. In Austen’s stories, her heroines often shun these predisposed qualities. One must remember that Darcy admires Elizabeth Bennet’s desire to improve her mind by extensive reading.