Posted on November 17, 2015 by reginajeffers

This is my second piece on London Architectural excellence. See my previous piece on Woburn Walk HERE. Today we look at the Burlington Arcade. 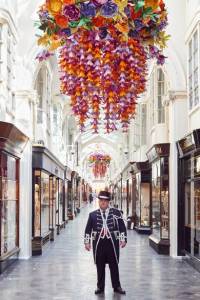 Located in the heart of Mayfair, we find the Burlington Arcade, a Grade II shopping center dating from 1819. The arcade is the longest shopping street in Britain. It is considered an historic and architectural masterpiece. Favored by royalty and the elite of British Society, the arcade had its own rules of conduct, many of which are still upheld by the infamous Beadles, the smallest private police force in existence.

Historically, the covered alley known as an “arcade” was an architectural wonder of the early Regency period, and the Burlington Arcade’s popularity has remained in tact. Lord George Cavendish remodeled Burlington House beginning in 1815 and continued until 1819. The Burlington Arcade, designed by Samuel Ware, was part of that remodeling.

The appearance of shops changed dramatically over the years of commerce. Early on, the shops of London were nothing more than an open marketplace upon the streets. Food stalls offered everything for the taking. Think upon the spectacle: Butchers killed and gutted animals before the purchaser’s eyes, before dumping the entrails into the gutter.

In early 18th Century Paris, the shops opened upon the street, which meant customers had the opportunity to view items before entering the shop, and the design of the three walled shop (open on the fourth wall) provided some protection from the elements. It also meant the shopkeeper had to remove all his merchandise from the open area EVERY day.

England perfected this idea. The open front wall from the Parisian shops were closed up at night by two horizontal wooden shutters. The top shutter provided an awning during the day, while the bottom one was propped up on legs to create a table, upon which to display the shop’s merchandise. The shoppers on the street could view the wares easily. A narrow door off to the side was used by the shopkeeper and his family for entrance into the shop area and living quarters. Customers did not enter through this door. When the price of glass became more reasonable, shopkeepers replaced the shutters with a welcoming window display. Customers came inside to make their purchases. The use of glass fronted shops was a mark of the English shops long before glass was used upon the Continent. 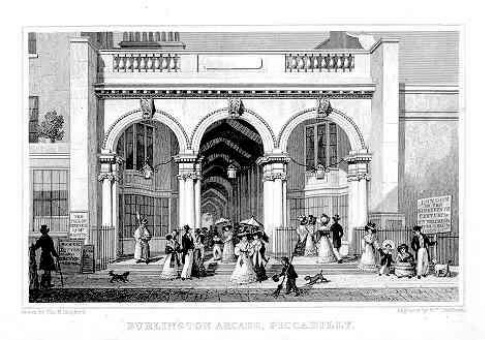 The Burlington arcade as it appeared about 1827, Thomas Hosmer Shepherd http://www.ultimatehistoryproject.com/a-shopping-extravaganza.html

In 17th Century England, enclosed shopping centers, known as “exchanges” came into being. These exchanges were covered arcades that catered to luxury goods. The New Exchange opened in 1667 (after the Great Fire of 1666. The Middle Exchange followed in 1672 and the Exeter Exchange in 1676. Buyers could make purchases in all types of weather, and sellers did not worry over damage to their wares. With the insertion of iron grilles at the ends of the passages, the shops were more secure. “Window shopping” became a pleasant activity. The Burlington Arcade is a single street covered by a peaked glass roof, which lights the whole arcade. 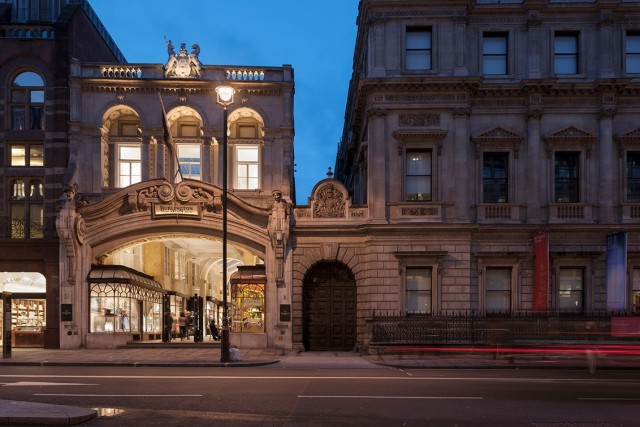