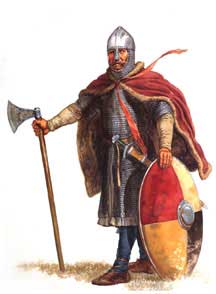 Because of this divide, the old English language became a “cottage” language, practiced by artisans and peasants. The language lost some of its distinctive forms and minor inflections. Latin and Norman French dominated court interactions, but as the Normans were few and the English many, some mingling occurred by necessity of everyday life. The English people and the language prevailed.

The Norman Conquest
http://www.bl.uk
In 1066, the Normans invaded England. It was an event that was to transform the English language forever.

The West Saxon tongue was replaced by Norman French in literary circles, and the question arose as to which language would become the literary standard. Needless to say, the English were not about to accept Norman French, so Mercian became the standard for several reasons.

(1) The Midland contained London, the capital city, the University of Oxford, and the royal court.

(2) The Midland area was accessible by those from both the northern and southern sections of the country. An understandable language used by both was a benefit to trade, etc.

(3) The Mercian language ushered in romantic tales of love and adventure to replace the somberness found in Anglo Saxon poetry.

(4) The Teutonic inflections of Anglo Saxon speech disappeared from usage.

(5) The Mercian language saw the introduction of Metrical Romances (tales in verse).  This tales included…

*** Tales centering on Charlemagne and his peers, chief of which is the Chanson de Roland

*** Tales centering on Alexander and the Fall of Troy 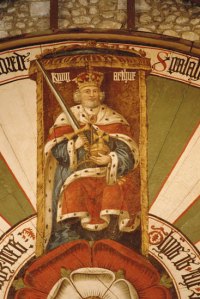 Jonathan Jones : Europe u-knighted: King Arthur proves how European the British are
http://www.pro-europa.eu
Arthur of the Britons, defender of Albion against the invading hordes