This version is a “reinterpretation” of Jane Austen’s Mansfield Park. As such, the 112-minutes film emphasizes the issues of slavery and the oppression of women’s rights. It is set in a particular social and political atmosphere, one Austen often glosses over in her novels. The film is set in 1805 and 1806. (See my previous post on Mansfield Park 1983.)

The film begins with a young Fanny being sent from Portsmouth to Mansfield Park. The viewer can see the disheveled Fanny’s uncertainties at being sent away from her family, but he/she can also note the child’s quick intelligence and her mettle. Fanny is portrayed as a precocious child. In fact, Rozema turns Fanny into an aspiring writer, much in the vein of Jane Austen. In many ways, “Austen” becomes the narrator of the film. Fanny, for example, reads to Edmund what she has written. She does likewise in the voiceovers. In both instances, the movie goer hears passages taken from Jane Austen’s juvenilia. In the opening, young Fanny is reading a story to her sister, one Fanny supposedly wrote. It is from Austen’s Love and Freindship (sic). Fanny is shown as having her head full of romance novels.

In the latter part of the film, when Sir Thomas informs Fanny of Henry Crawford’s proposal, Fanny reads aloud to herself what she wrote: “From this period, the intimacy between them daily increased till at length it grew to such a pitch, that hey did not scruple to kick one another out of the window on the highest provocation.” This speech comes from Austen’s Frederic and Elfrida: A Novel, which Austen wrote in her early teens. In this short piece, one of Austen’s Juvenilia, Austen parodies some of the silly sentimental heroic literature of the late 1700s.

When Sir Thomas announces to Mrs. Norris, his wife, and daughters that Fanny is of a second-class status in comparison to his family and children, young Fanny is standing outside the room and overhears his protestations. Fanny’s position in the house is set with these lines. Mrs. Norris assures Sir Thomas that his sons will think of Fanny as nothing more than as “sister.”

To illustrate Fanny’s growing maturity, Rozema has Fanny read from Austen’s The History of England. Fanny looks into the camera to read: “It was in this reign that Joan of Arc lived and made such a row among the English. They should not have burnt her but they did….” This is followed by what is know in film as a dissolve. Fanny continues to read in a voice over: “Henry the 7th. His Majesty died, and was succeeded by his son Henry whose only merit as not his being quite so bad as his daughter Elizabeth.” After another dissolve, Fanny’s character looks again into the camera to say: “And then that disgrace to humanity, the pest of society, Elizabeth, who, Murderess and Wicked Queen that she was, confined her cousin, the lovely Mary Queen of Scots for 19 YEARS and then brought her to an untimely, unmerited, and scandalous Death. Much to eternal shame of the Monarchy and the entire Kingdom.” The camera slides to Edmund (Jonny Lee Miller), who is Fanny’s audience for her reading. It is the viewer’s first look at Edmund Bertram.

Rozema used Kirby Hall in Northhamptonshire for the exterior scenes and some of the interior shots. In the original novel, Mansfield Park is described as such, “Miss Crawford soon felt that he and his situation might do. She looked about her with due consideration, and found almost everything in his favour: a park, a real park, five miles round, a spacious modern-built house, so well placed and well screened as to deserve to be in any collection of engravings of gentlemen’s seats in the kingdom, and wanting only to be completely new furnished–pleasant sisters, a quiet mother, and an agreeable man himself–with the advantage of being tied up from much gaming at present by a promise to his father, and of being Sir Thomas hereafter.” In contrast, Kirby Hall is an Elizabethan mansion. Kirby Hall gives the viewer the idea that the Bertram family fortune wanes. Even the interior scenes add to this impression. The walls are bare and few furniture is evident. Fanny’s first walk through of the house has her climbing bare stone steps to an attic storage room furniture and toys no longer necessary for the house is stored.

One of the best exterior shots in the film is when Fanny and Edmund return to Mansfield Park when Tom Bertram is ill. The house is shrouded in fog providing the viewer a feeling of foreboding. 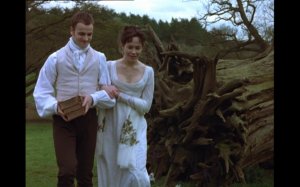 One of the discrepancies with the novel that struck me is the physicality of Francis O’Connor in the role of Fanny. She rides horse and races across the estate grounds. She is more in the vein of Elizabeth Bennet than the sickly child of Fanny Price from the novel. She is TOO familiar with Edmund Bertram for 19th Century morals. They spend time together in her bedroom and in private walks.

Going against Austen’s original story, this film omits the character of William Price, Fanny’s brother. I found this a bit frustrating for Fanny’s qualms about accepting Henry Crawford’s proposal is abandoned. Crawford’s “kindness” in assisting William Price to a commission in the military plays strongly in Fanny’s decision. This key point of the original story is glossed over in this adaptation. Instead of writing letters to William, Fanny writes to her sister. We hear the content of these letters in voiceovers read by Fanny. Also, William is omitted from the ball given by Sir Thomas in Fanny’s honor.

The political issue of slavery invades this film in a way the book does not. In the novel, slavery is mentioned only once. Fanny tells Edmund that her family ignores her when she asks of the problem of slavery. When Fanny is on her way from Portsmouth to Northhamptonshire slave ships are shown in anchor. Fanny hears men singing, and the coachman says that the captain of the ship is bringing some “darkies” home to his wife. The song is repeated when Fanny returns to Portsmouth and again during the film’s ending credits. Slavery is brought to issue in the film when Edmund tells Fanny that Sir Thomas’s bad humor is a result of problems on the plantation in the Americas.

Edmund: The abolitionists are making inroads.
Fanny: That’s a good thing, isn’t it?
Edmund: We all live off the profits from slavery. Even you, Fanny.

Later, in the film, Edmund rebukes his father for Sir Thomas’s lack of humanity for the loss of lives on the plantation.

Sir Thomas speaks of his slaves, saying, “The mulattos are in general well-shaped and the women especially well-featured. I have one so easy and graceful in her movements as well.” Sir Thomas goes on say he will bring a slave back to Mansfield Park to work as a servant. No part of this scene appears in the novel.

This talk of slavery leads Fanny to tell Edmund “I’ll not be sold off like one of your father’s slaves” when Sir Thomas says he will give ball to help Fanny find a mate. This line is the “theme” of the film. Rozema portrays the lives of women of the time period as equivalent to the slaves of which Sir Thomas so often speaks. Sir Thomas “orders” Fanny to marry Henry Crawford; he dictates to her more so than he does his daughters.

The character of Tom Bertram is also different from the original novel. Tom is this film is not only a spoiled indulgent eldest son who wastes his allowance and other funds on horse racing and gaming hells, but Tom also is self-destructive. Mrs. Norris shows Fanny one of Tom’s “self portraits,” one is which Death has his hand on Tom’s shoulder. In Austen’s novel, Tom Bertram is a minor character. In this film, he becomes the reflection of his father’s sins.

This film leaves out the visit to Sotherton, an important episode in the novel. In this adaptation, when the Crawfords call at Mansfield Park, Rozema has the camera show the reaction of each of the main characters (Maria, Rushwoth, Julia, Lady Bertram, and Fanny) before it pans to the Crawfords, visually describing them by panning from heel to head on first Mary and then Henry.

When Mary asks, “Who is to play Anhalt? What gentleman among you, am I to have the pleasure of making love to.” In the novel, no real notice is given the line. We must recall that in the early 19th Century, “making love” was courtship, not a sexual activity. However, in the film, Embeth Davidtz’s delivery of the line puts special emphasis on the words. 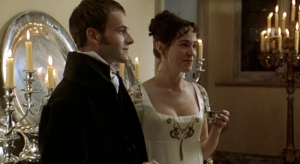 The costumes display Rozema’s view of the time period. Fanny wears jumpers over long-sleeve blouses as her daily wear.

Fanny’s clothes are not fitted in any way. The dress for the ball is a contrast to this “dullness.” Fanny appears in a white, empire style dress with evident décolletage. After the ball, Fanny’s breasts are on display in her clothing. Fanny also rarely wears a hat in the film, especially when she travels back to Portsmouth. As women were very conscious of their skin (as Sir Walter remarks in Persuasion) and being too brown (as Elizabeth is in P&P), this breaks with the time period. The character of Mary Crawford wears tight-fitting clothing and displays lots of décolletage. She never wears pastels, which is unusual for unmarried ladies in the early 1800s. With skirts and form fitting blouses, the costumes appear more modern than period pieces.

In this film, the scenes when the characters perform the play differ from the novel. Fanny does not refuse to take part in the play. Mrs. Norris, fearing Fanny means to move into circles to which she is not relegated, sends Fanny about her work rather than to encourage Fanny to participate in the play. In the novel, it is Mrs. Norris who “shoves” Fanny into a minor role.

Some critics of the film feel that the scene where Mary comes to Fanny’s room to practice her lines is suggestive of lesbianism, especially as Edmund is watching them. Mary places her hands on Fanny’s waist as the camera circles them. Mary is not only practicing her lines, she is also flirting with Edmund, who accepts the role of Anhalt (from Inchbald’s “Lovers’ Vows”) after viewing the rehearsal. Later, Mary removes Fanny’s clothing after Fanny is caught in the rain. It is all so “Not Austen,” in my opinion. I assume because Rozema had two previous films with lesbianism as an issue that critics made the natural jump in conclusions. The scene does not make me uncomfortable, it is just not “Austen.”

Another time that Rozema uses a circling camera is when Henry Crawford reads Laurence Sterne’s “A Sentimental Journey” to Fanny. Maria spies on the pair, realizing that Henry is courting Fanny. 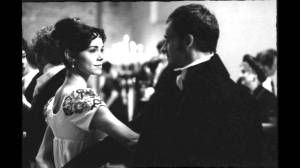 At the ball, the dances appear more “intimate” than the customary period dramas. At the end of the ball, Fanny chooses to leave on her own, a wine glass in hand. The dance scenes show her thoroughly enjoying herself.