Rame Head is a coastal headland, southwest of the village of Rame in southeast Cornwall, United Kingdom. The area plays a prominent role in the climax of my Regency romance, The First Wives’ Club, which earned an honorable mention in historical romance at the SOLA’s Seventh Annual Dixie Kane Awards.

The site was used for a hill fort in the Iron Age. The headland has a prominent chapel, dedicated to St Michael, accessible by a steep footpath. The chapel was first licensed for Mass in 1397 and is probably on the site of a much earlier, Celtic, hermitage. It remains as an intact shell. Earl Ordulf, who was the owner of vast estates in the West Country and was the uncle of King Ethelred, gave Rame to Tavistock Abbey (which Ordulf had founded) in 981. 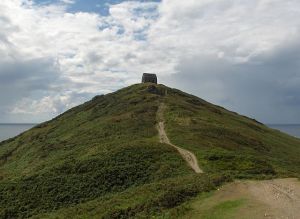 The headland is prominent to sailors and fishermen leaving Plymouth through Plymouth Sound. It is often the last piece of land they see leaving England, and the first they see when returning home; Rame Head thus appears in the sea shanty “Spanish Ladies.”

Due to its exceptionally high and panoramic vantage point, there is a volunteer National Coastwatch Institution lookout on the top of the headland.

The headland forms part of Rame Head & Whitsand Bay SSSI (Site of Special Scientific Interest), noted for its geological as well as biological interest. The SSSI contains 2 species on the Red Data Book of rare and endangered plant species; early meadow-grass (poa infirma) and slender bird’s-foot-trefoil (from the lotus genus).

Rame Head is a part of Mount Edgcumbe House and Country Park which is jointly owned and run by Cornwall Council and Plymouth City Council.  Information from Wikpedia