Life Below Stairs ~ Part One ~ Compensation and Obligations

Posted on January 1, 2014 by reginajeffers 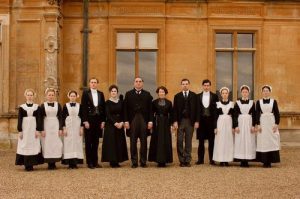 With the popularity of Upstairs, Downstairs and Downtown Abbey, the populace has become more aware of the British servant class. So what do we know of those who lived “below stairs”? First, rank and precedence ruled those of the servant class as much as it did their masters. What was known as the “pugs procession” was commonplace among servants. Instead of the chatty scenes between upper and lower servants on Downtown Abbey, most household were ruled by “silence.” All the servants would take their dinner together in the servants’ hall, but then the upper servants (the house steward, the butler, and the housekeeper) would move to a private sitting room for their dessert.

Being neither seen nor heard would be the order of the day. It was not unusual for maids to turn and face the wall if she encountered her master or mistress in the passageways. The upper housemaids were responsible for the appearance of the rooms. They addressed the draperies, the floral arrangements, the chair covers, etc. The under housemaids did the physical duties of laying a fire, polishing, cleaning the grates, etc. In Letters from England, Elizabeth Davis Bancroft, the wife of the U.S. Minister to England (1846-49), wrote, “The division of labour, or rather ceremonies, between the butler and the footman I have now mastered, I believe in some degree, but that between the upper and under housemaid is still a profound mystery to me, though the upper has explained to me for the twentieth time that she did only ‘the top of the work.”

Richard Henry Dana, son of the author of Two Years Before the Mast, spoke of a similar demarcation of duties in his Hospitable England in the Seventies. Dana had been invited to spend some time with Earl Spencer at Althorp. He and Lord Charles Bruce wished to play some lawn tennis, but they could find no one to whitewash the court’s markings in the grass. It seems that the job belonged to the “man-of-all-work,” but the servant was no where to be found. Dana said, “Neither the gardener, nor the footmen, nor the valets, nor the bootblacks nor, of course, the maids would help. Our hostess knew this so well that she did not even ask them.”

Servants did receive certain “compensations” for their service. They had a roof over their heads and four full meals per day – breakfast, dinner, tea, and supper. If they were enterprising enough, they could also have the remains of the masters’ meals. They received either a pint of home brewed beer (half pint for women) with each meal or a beer money allowance, usually 8d per day. The upper servants often were provided with wine for their meals. Wages were paid quarterly. Except for clothing, servants had few expenses, and a wise servant could save enough for a nest egg, to start a small business, or assist his struggling family. Loyal servants received pensions of £20 to £25. Smart upper servants could “earn” extra funds from tradesmen seeking the master’s business. The cook, traditionally, claimed the roast’s drippings as her own. The butler and footmen laid claimed to the candle butts. A smart butler might siphon off some of the master’s wine stock, either a decanter at a time or a whole bottle.

In “Life Below Stairs” by Frank Huggett, there is a list of wages (1888) from the records of the Duke of Richmond and Gordon paid out to the duke’s servants for a year’s service:

the groom of the chamber £70

the valet, the housekeeper, and the cook  £60 each

Servants also EXPECTED to receive a tip from the master’s guests. A guest would be leave a half-sovereign for the housemaid in honor of the condition she maintained his quarters, a sovereign for the groom of the chambers for lighting the candles each evening, likewise a sovereign for the butler for his personal advice and favors and a footman who acted as valet to a gentleman traveling without his personal servant. A guest might also tip the gamekeeper, etc. etc., etc. The list could easily grow to a tidy sum. Even visitors making tours of great estates were expected to tip the housekeepers guiding their tours.

And Heaven help the guest who did not meet his obligations. Upon his next visit, he might be housed in a drafty chamber or find his cut of meat the least desirable ones.

Return tomorrow for Part II on “Life Below Stairs.”

BTW, those of us in the States are anxiously awaiting the return of “Downtown Abbey” – Season 4 on January 5. NO SPOILERS PLEASE!!!!

2 Responses to Life Below Stairs ~ Part One ~ Compensation and Obligations