Writing “The Disappearance of Georgiana Darcy”

This interview originally was posted to The Dark Jane Austen Book Club website on March 18, 2013. My novel “The Disappearance of Georgiana Darcy” is their book read for March.

When did you begin with your Pride and Prejudice books? Are they related to one another, or isolated works connected solely by their relationship to Jane Austen’s original tale?

During the 2008-2009 school year, my Advanced Placement English Language class listened to me complain about a particular retelling of Pride and Prejudice, which had drifted dramatically from the original story line, so much so that I had told the group that in my frustration, I had thrown the book across the room. In saying this, I am not speaking of those who write vampiric or werewolf versions of the tale – oops, that would be moi – but a story which changed Darcy’s personality from a man who uses an implausible power to set everything aright for Elizabeth to one whose vulnerability crippled him. Anyway, one of my students challenged me to write my own version of the story. At first, I considered his challenge as absurd, but the longer I thought on it, I began to think, why not? And so, I began to write Darcy’s Passions: Pride and Prejudice Retold Through His Eyes.

The book began a class endeavor. The students tried their hands at editing, and there are still a few errors within the text, but I have always thought the experience was more important than correcting every tense shift. I, originally, self-published the book and permitted one of my students to draw the cover. I never thought to have a career in publishing. However, the book did very well, and Ulysses Press contacted me about publishing the book professionally.

Although it is designed to have a sequel, which I hope some day to write, Captain Wentworth’s Persuasion: Jane Austen’s Classic Retold Through His Eyes is a stand-alone book.

Like Captain Wentworth’s Persuasion, Vampire Darcy’s Desire is designed for a sequel, but as of this date, it, too, is a stand-alone novel.

Christmas at Pemberley, an inspirational novel, is set some two years into the Darcys’ marriage. In it, one finds Georgiana Darcy coming into her own right. The Disappearance of Georgiana Darcy begins three months after Christmas ends. Disappearance is another cozy mystery, which has the Darcys and Colonel Fitzwilliam searching for Georgiana on the Scottish moors. (Christmas at Pemberley was a 2012’s Book Sellers Best Award Finalist in Inspirational Romance, as well as the runner-up at the New England Book Festival.)

My March 12 release of The Mysterious Death of Mr. Darcy is set some six months into the Darcys’ marriage. The third of my cozy mysteries, TMDOMD, is a stand-alone novel, but it does “bridge” the gap between Darcy’s Temptation and The Phantom of Pemberley.

Honor and Hope is a contemporary romantica based on Pride and Prejudice and is not related to my other Austen-inspired novels.

What was the most challenging aspect of writing The Disappearance of Georgiana Darcy?

When writing any mystery, the author cannot just have a murderer and a victim. He/She must also have suspects, red herrings (false clues), motives, and deception. There must be a balance between the suspense and the story’s pace must be maintained. The red herrings must lead the reader (and likely the hero/heroine) astray, but they cannot hijack the story line. Then one must mix in the subplots without destroying the purpose of solving the crime. In addition, a cozy mystery has other distinct qualities.

Malice Domestic (http://nancycurteman.wordpress.com/2012/06/21/10-characteristics-of-a-cozy-mystery/) lists these characteristics of a cozy mystery:

1. The murder is either bloodless or committed before the story begins.

2. Violence, sex, and coarse language are held to a minimum or reference off scene.

3. The villain is apprehended and punished at the end of the story.

4. The amateur sleuth who solves the crime is an upstanding person with good values and minor faults.

5. The amateur sleuth has an “occupation” unrelated to detective work. He/she is remarkably capable in deciphering clues and making connections.

6. Standard cozies involved greed, jealousy, or revenge as the motive.

7. The setting is limited in its pool of suspects (likely a small town, neighborhood, an English manor, etc.)

8. Investigating the crime makes the amateur detective the target of the murderer.

9. The cozy is designed for a gradual revelation of clues, which lead to a surprise ending.

10. A bit of romance parallels the main story line in the subplots.

Which character has been your favorite to develop among your Austenesque works?

Colonel Fitzwilliam remains my favorite. Although Austen provides us so little information on the good colonel, I have my own opinions of the man, and in Christmas at Pemberley and The Disappearance of Georgiana Darcy, I have discovered a man I really liked. (Actually, for me, defining Colonel Fitzwilliam in Vampire Darcy’s Desire opened up new possibilities. I was not truly satisfied with my characterization of the Colonel in my earlier works.) He has more layers in Christmas and Disappearance – was more than just Darcy’s sidekick. Readers will find him defined by his actions and his code of conduct.

Unlike some other Austenesque authors, I have called my Colonel Fitzwilliam “Edward” because “Edward” is my father’s name. In my later works, the Colonel has become a bit more of an alpha male, meaning he is successful in his chosen field. Although far from perfect, Edward Fitzwilliam acts from honor. He does not rest upon his laurels nor does he use his position as an earl’s son to bend people’s wills for his own benefit. The colonel possesses integrity; there are unwritten laws that he will not violate. He is masculine, charismatic, and sensual. In each of my cozy mysteries and in my vampiric tale, Colonel Fitzwilliam does not simply rationalize what is best to solve Darcy’s dilemma, he acts to resolve the situation.

Have you considered writing any novels utilizing other of Jane Austen’s works?

As I mentioned earlier, I have a retelling of Austen’s Persuasion entitled Captain Wentworth’s Persuasion.

Blurb from the back of the book: Captain Wentworth’s Persuasion: Jane Austen’s Classic Retold Through His Eyes

Wentworth initially suffers rejection and frustration because the titled Elliots do not consider him good enough for their daughter Anne. Despite her feelings for Wentworth, Anne allows others to persuade her to break off their engagement. Eight years later, when Wentworth returns from fighting against Napoleon’s army, the difficult years of war have reversed fortunes. Now it is he who is rich, having won many prizes in battle, while the Elliots are deeply in debt and in danger of losing their good name.

Will Wentworth seek revenge by choosing another woman over his former love? Can he walk away from Anne, or will the memory of her lips and her touch capture his love once again?

This month is particularly exciting with the release of your latest book. What can you tell us about it? 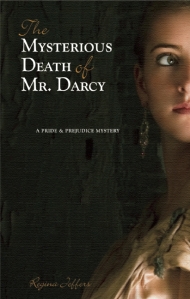 The Mysterious Death of Mr. Darcy was released by Ulysses Press on March 12. It is my ninth Austen-inspired title and another cozy mystery. It is set six months into the Darcys’ marriage, and I think it one of the “darkest” of my tales. In it, one finds an internal decapitation, witches covens, powerful talismans, a band of gypsies, multiple deaths, ancient treasures, and a nail-biting ending.

A Pride and Prejudice Mystery

A thrilling story of murder and betrayal filled with the scandal, wit and intrigue characteristic of Austen’s classic novels

Fitzwilliam Darcy is devastated. The joy of his recent wedding has been cut short by the news of the sudden death of his father’s beloved cousin, Samuel Darcy. Elizabeth and Darcy travel to Dorset, a popular Regency resort area, to pay their respects to the well-traveled and eccentric Samuel. But this is no summer holiday. Danger bubbles beneath Dorset’s peaceful surface as strange and foreboding events begin to occur. Several of Samuel’s ancient treasures go missing, and then his body itself disappears. As Darcy and Elizabeth investigate this mystery and unravel its tangled ties to the haunting legends of Dark Dorset, the legendary couple’s love is put to the test when sinister forces strike close to home. Some secrets should remain secrets, but Darcy will do all he can to find answers—even if it means meeting his own end in the damp depths of a newly dug grave.

With malicious villains, dramatic revelations and heroic gestures, The Mysterious Death of Mr. Darcy will keep Austen fans turning the pages right up until its dramatic conclusion.

Book Discussion Suggestions: As we are a book club, we like discussing books. Sometimes this involves spoilers, but we try to keep them from telling the whole story or revealing the juiciest bits in any of the posts we write. Are there any discussion topics for The Disappearance of Georgiana Darcy which you would like to suggest we pursue?

Your readers might explore some of the exhibits at The Edinburgh Dungeons http://www.the-dungeons.co.uk/edinburgh/en/attractions/what-is-edinburgh-dungeon-attraction.htm, which is 500 years of Edinburgh’s darkest and most gory history, eleven live actor shows and 2 scary rides make the Edinburgh Dungeon an educationally chilling experience and a great day out for the whole family.