A Resurgence of Jane Austen

Several people believe that Colin Firth’s stellar two-year “flirt” with Oscar’s fame – first with a spectacular performance in “A Single Man” and then in “The King’s Speech” – has led to a resurgence of Jane Austen’s popularity. In the 1995 BBC mini-series, Firth played the enigmatic Mr. Darcy from Austen’s Pride and Prejudice, and a legion of Austen fans are cheering on his successes. Obviously, I am one of those. I write Jane Austen adaptations, as well as Regency era romances. For a more detailed analysis of this “new” phenomena, read the article below from The Star.

Kristin Rushowy
Education Reporter
Almost 200 years after her death, it is a truth universally acknowledged that Jane Austen and her works have found new life in the online world.

But these days, there’s another, real-world reason for all the interest in the 19th-century novelist: English actor Colin Firth.

Beloved among fans for his portrayal of Mr. Darcy in the famed 1995 BBC production of Pride and Prejudice.

Firth was the reason “a lot of people got hooked on the novels,” said Deidre Lynch, an English professor at the University of Toronto whose Austen classes typically have as big a wait list as the classes themselves.

But, she added, that’s too simple an explanation for Austen’s ever-growing legion of fans. Social media, too, have given Austen a second life.

Austen is on Twitter — well, fans tweeting in her name — and is the subject of countless Facebook fan pages that grow daily, one with almost 850,000 “likes.” Devotees have created aFacebook newsfeed version of P&P, and others post videos to Youtube in Austen’s honour, from serious scene recreations to hilarious send-ups.

“It’s like votive offerings to Jane Austen, as if she were a saint,” said Lynch, editor of Janeites: Austen’s Disciples and Devotees.

In her current undergraduate class on romantic poetry and prose “Austen makes a few appearances,” she said. “The students would probably prefer more.”

Publishers often have trouble keeping up with demand for Pride and Prejudice.

There has been “a pretty steadily increasing Austen presence in popular culture — but not much of that really connected to the books Austen wrote,” noted Elaine Bander, president of the Canadian chapter of the Jane Austen Society of North America. 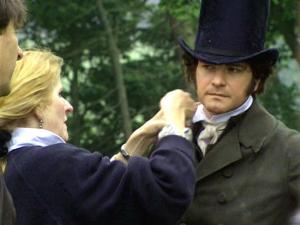 Regina Jeffers is the award-winning author of Austenesque, Regency and historical romantic suspense.
View all posts by Regina Jeffers →
This entry was posted in Uncategorized and tagged Jane Austen. Bookmark the permalink.
Loading Comments...
%d bloggers like this: