Posted on September 5, 2022 by Regina Jeffers

New York City saw the celebration of the first Labor Day on 5 September 1882. The celebration marking the event was designed by the Central Labor Union. 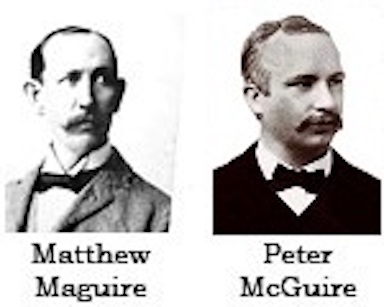 “According to legend, Peter McGuire stood before the New York Central Labor Union on May 12, 1882, to suggest the idea of setting aside one day a year to honor labor. McGuire believed that Labor Day should “be celebrated by a street parade which would publicly show the strength and esprit de corps of the trade and labor organizations.”

“Peter McGuire was a young, though well-respected, union leader. A child of immigrants, he quit school at an early age to go to work. In 1881, he founded the United Brotherhood of Carpenters, which would become the largest trade union of the time. Later, McGuire would join with his friend, Samuel Gompers, to found the American Federation of Labor (AFL). Through the AFL and the Carpenters, McGuire led the great strikes of 1886 and 1890, which would eventually result in the adoption of the eight-hour workday on the nation’s agenda.

“Recently, however, evidence uncovered at the New Jersey Historical Society in Newark reveals that another respected union figure of the day, Matthew Maguire, may quite possibly be the man behind the creation of Labor Day.

“In the 1870s, Matthew Maguire led several strikes, most of which were intended to force the plight of manufacturing workers and their long hours into the public consciousness. By 1882, Maguire had become the secretary of and a leading figure in the Central Labor Union of New York.

“According to the New Jersey Historical Society, after President Cleveland signed into law the creation of a national Labor Day, The Paterson (N.J.) Morning Call published an opinion piece entitled, ‘Honor to Whom Honor is Due,’ which stated that ‘the souvenir pen should go to Alderman Matthew Maguire of this city, who is the undisputed author of Labor Day as a holiday.’ This editorial also referred to Maguire as the ‘Father of the Labor Day holiday.’

“So why has Matthew Maguire been overlooked as the ‘Father of Labor Day’? According to The First Labor Day Parade, by Ted Watts, Maguire held some political beliefs that were considered fairly radical for the day and also for Samuel Gompers and his American Federation of Labor. Allegedly, Gompers did not want Labor Day to become associated with the sort of “radical” politics of Matthew Maguire, so in a 1897 interview, Gompers’ close friend Peter J. McGuire was assigned the credit for the origination of Labor Day.”

So, what happened on that first Labor Day? In reality, a bit of mayhem occurred. 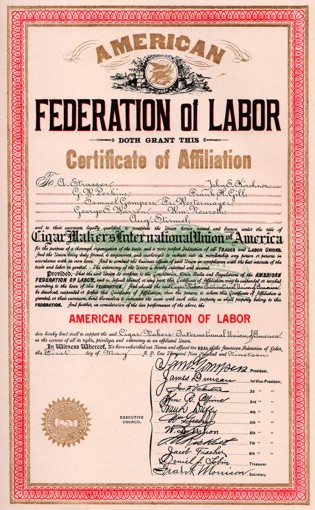 Spectators for the event had arrived early to claim a spot to view the parade that was to pass near City Hall in Manhattan, along Broadway. A newspaper account of the day described “…men on horseback, men wearing regalia, men with society aprons, and men with flags, musical instruments, badges, and all the other paraphernalia of a procession.”

Worrying over what COULD occur, police were out in full force on horseback and on foot. They were in place to “control the crowd” by 9 A.M.

William McCabe served as the Grand Marshall for the parade, but when time came for them to step off, there were only a few marchers in place, and none of them had brought an instrument or music to play. Some even suggested that McCabe abandon his post, but he refused. Fortunately, Matthew Maguire of New York’s Central Labor Union hustled over to McCabe to inform the man that 200 marchers from Newark, New Jersey’s Jewelers Union were crossing over to Manhattan on the ferry, and thankfully, they had brought a band with them.

Although McCabe and his aides and the police escort were a bit late stepping off, shortly after 10 A.M. the jewelers and their band turned onto lower Broadway. They played a tune from a popular Gilbert and Sullivan opera: “When I First Put This Uniform On.” The song seemed quite appropriate for the occasion. As the jewelers smartly marched past, McCabe and his aides followed. The police escort formed a line supposedly to keep the spectators back, but soon spectators were slipping through the police line and joining the marchers. Before long, there were 700 men in line in the first of three divisions of Labor Day marchers. Final reports of the total number of marchers ranged from 10,000 to 20,000 men and women.

The New York Tribune reported that, “The windows and roofs and even the lamp posts and awning frames were occupied by persons anxious to get a good view of the first parade in New York of workingmen of all trades united in one organization.”

The crowd arrived at Reservoir Park at noon. Here the parade was to end, but not necessarily the celebration, which was moved to Elm Park at 92nd Street and Ninth Avenue. The post-parade celebration included speeches, a picnic, and beer kegs galore. Nearly 25,000 union members and their families celebrated some eight hours, until around 9 P.M.

The second Labor Day was celebrated on 5 September 1883, but beginning in 1884, the first Monday in September became the official holiday. “The Central Labor Union urged similar organizations in other cities to follow the example of New York and celebrate a “workingmen’s holiday” on that date. The idea spread with the growth of labor organizations, and in 1885 Labor Day was celebrated in many industrial centers of the country.” (United States Department of Labor)