Colchester is an historic Essex town, Britain’s first city and former capital of Roman Britain. Its rich history dates back over 2000 years. In AD49, Colchester was the capital of the kingdom of Cunobelin. It was considered a Roman Colonia, basically, a community dedicated for retired veteran soldiers. It more terms, this would have been a 55+ type of community. We must remember, however, this was a ROMAN community in a new province.

Colchester was called Camulodunum. It was the first Roman town in Britain. It was, however, reduced to ashes by Queen Boudica in AD 60.

Reportedly, Colchester’s status as a Roman Colonia has never been revoked. It is, therefore, considered to be Britain’s first city, as well as the former capital of Britain. It was also thought to be the capital of the kingdom of Cunobelin, who is Shakespeare’s Cymbeline. In the play, “King Cymbeline of Britain banishes his daughter Innogen’s husband, who then makes a bet on Innogen’s fidelity. Innogen is accused of being unfaithful, runs away, and becomes a page for the Roman army as it invades Britain. In the end, Innogen clears her name, discovers her long-lost brothers and reunites with her husband while Cymbeline makes peace with Rome.” [Summary of Cymbeline] The Roman writer, Pliny the Elder wrote of island of Anglesey, “It is about 200 miles from Camuldodunum, a town in Britain.” This was around AD77. This would prove to be the first known literary reference to any named community in England. 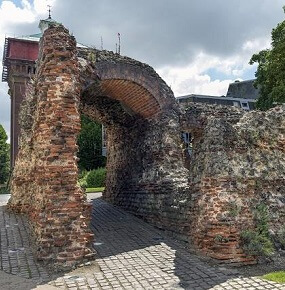 The Saxons later gave the town the name of Colchester, meaning ‘the Roman fortress on the River Colne. In the 11th Century, the Normans constructed the largest keep ever built in Europe. It was on top of the Roman temple of Claudius. Although he is no longer four storeys high, this keep is still the largest in England.