Meet Francis Grose, Author of the 1811 Dictionary of theVulgar Tongue

As my novels are set in the early part of the 1800s, attempting to discover appropriate words to express “dismay” or “disgust” often sends me searching out my online copy of 1811 Dictionary of the Vulgar Tongue, a Dictionary of Buckish Slang, University Wit, and Pickpocket Eloquence. The book is written by one Francis Grose.

Amazon describes the books as such…

From the 1790s to the 1820s, numerous editions of the Dictionary of the Vulgar Tongue were published. Looking at the slang and vernacular language of the time, this dictionary pre-dated Roger Mellie’s best-selling Profanisaurus by a good 200 years. Reprinted here, it covers the rude, the crude and the downright vulgar.Learn how the Georgians and early Victorians would insult each other and find out how some of today’s words and derivations have come about. But most of all, just dip in and see how our ancestors considered and talked about such subjects as sex and the workings of the human body.

But who was Francis Grose? Born about 1731, at Greenford, Middlesex, Francis Grose was the eldest son Francis Grose (Sr.) or (Equire) and his wife Ann Bennett (or Bennet), daughter of one Thomas Bennett [you JAFF fans will know I smiled when I saw this name] of Kingston, Oxfordshire, who happen to be my 6th Great-Grandfather and Great-Grandmother. Francis Sr. was born in Berne, Switzerland, an immigrant who came to England in the early 18th Century, with a pedigree in the College of Arms. He was a jeweller of some renown living at Richmond in Surrey. He fitted up the coronation crown of George III (some accounts say George II, but either way he was a jeweller to a king). He was also a collector of prints and shells, which were sold around 1770.

Frances Jr. (my 6th Great-Uncle)  received a classical education, but did not attend university. He studied art at Shipley’s and even exhibited a stained drawing entitled “High Life below Stairs” with the Incorporated Society of Artists in 1768. In 1769, he exhibited tinted drawings of an architectural nature at the Royal Academy. According to the Dictionary of National Biography, Volume 23, “Grose illustrated many of his own works, and some of his original drawings are in the British Museum (Fagan, Handbook of Dept. of Prints, p. 193). From 12 June 1755 till 1763 he was Richmond herald. He then became adjutant and paymaster in the Hampshire militia. He said his only account-books were his right and left hand pockets: into one he put what he received, and from the other he paid out. From 1778 (or earlier) till his death, he was captain and adjutant of the Surrey militia. In 1773 he published the first number of his ‘Antiquities of England and Wales,’ &c., and completed the work in 1787 (London, 4 vols. folio; new ed. 8 vols. London [1783-] 1797, 4to.). Many of the drawings were made by himself, but in the letterpress he was helped by other antiquaries.”

As Francis Sr. was quite wealthy, Francis Jr. came into his wealth, which he quickly spent without much care as to when his next full pocket would be.

In 1789, he toured Scotland and enjoyed the patronage of Robert Riddell, another well-known antiquary, staying at Riddle’s estate, Friars Carse. There he made the acquaintance of Robert Burns, who wrote of Grose’s “Peregrinations through Scotland, collecting the Antiquities of that kingdom,” his “Hear, Land o’Cakes, and brither Scots.”

Burns was quite vocal regarding Grose. He wrote “Ken ye ought o’ Captain Grose?” and what is termed a rather coarse “Epigram of Captain Grose.”

Early in 1791, he traveled to Ireland to for another antiquarian tour, but died on 12 May of an apoplectic fit while dining with his friend, Nathaniel Hone, in Dublin. He was buried on 18 May  in Drumcondra Church, near Dublin. 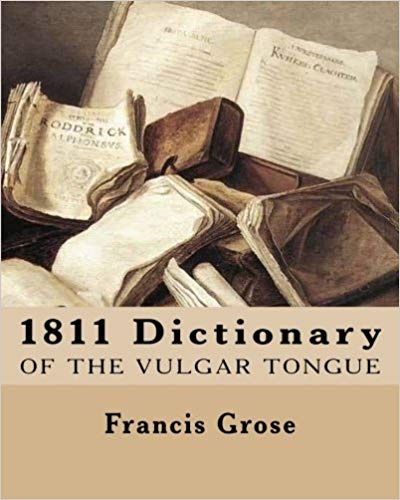 From Wikipedia, we find this list of his works:

A list of works ordered by original year of the publication of the first volume:

The Dictionary of National Biography says of Grose, “Grose has been described as a sort of antiquarian Falstaff. He was immensely corpulent, full of humour and good nature, and ‘an inimitable boon companion’ (Noble, Hist. of the College of Arms, pp. 434-438, Gent. Mag., 1791, vol.lxi, pt. ii. p. 660). There is a full-length portrait of him, drawn by N. Dance and engraved by F. Bartolozzi, at the beginning of his ‘Antiquities of England,’ vol. i. 1st ed. (for other portraits, see Noble, pp. 436-7; and Gent. Mag. 1791, vol. lxi. pt. i. pp. 493-494). Grose lived chiefly at Mulberry Cottage, Wandsworth Common (Brayley, Surrey, iii. r99). He married Catherine, daughter of Mr. Jordan of Canterbury, by whom he had two sons and five daughters. The eldest son, Colonel Francis Grose, was deputy-governor of Botany Bay (Notes and Queries, ser. ii. 47, 257, 291).”

2 Responses to Meet Francis Grose, Author of the 1811 Dictionary of theVulgar Tongue