James Wilmot on “Who Wrote Shakespeare’s Plays?” + an eBook Giveaway

Posted on January 6, 2020 by reginajeffers

anonymous engraving of James Wilmot – scanned from Serres, O The Life of the Author of the Letters of Junius, the Reverend James Wilmot, MD, London, 1813. ~ public domain via Wikipedia

James Wilton was supposedly the first to question whether William Shakespeare was the actual author of the plays and sonnets we now attribute to him. Wilmot was an English clergyman, having been educated at Oxford, and scholar from Barton-on-the-Heath, Warwickwickshire, some six miles from Stratford-upon-Avon. We know something of his Shakespeare research because his friend James Corton Cowell conducted two lectures at the Ipswich Philosophic Society on the subject in 1805. However, there are those who believe the Ipswich Philosophic Society did not exist, nor can they find a record of James Corton Cowell. That being said, Cowell’s two lectures DO exist in handwritten manuscript form: “Some Reflections on the Life of William Shakespeare.” They can be found in the Durning-Lawrence collection at London University. Could Cowell simply have written out his research, but not shared it with others?

Page from a manuscript purportedly written in 1805 by James Cowell, which has since been determined to be a forgery. MS 294, Senate House Library, University of London ~ public domain ~ via Wikipedia

Sir Edwin Durning-Lawrence was a British lawyer and Member of Parliament. He was a strong advocate for the idea that Francis Bacon was the true author of Shakespeare’s plays. Durning-Lawrence penned several books on the subject and hosted public debates on his Baconian theory. His widow donated his research to London University upon his death, among those pieces were the two “Cowell” manuscripts, which tell something of Wilmot’s search for any books or papers that reference Shakespeare as being the author of the plays attributed to him. After covering a 50-mile radius of Stratford, Shakespeare’s home, Wilmot concluded that Shakespeare was not the author of the plays, but rather the author was Sir Francis Bacon. The problem is that Wilmot only confided his findings to Cowell. The actual research was supposedly burned.

It has even been suggested that Wilmot may have been the author of The Story of the Learned Pig (1786). “The anonymous pamphlet The Story of the Learned Pig, By an officer of the Royal Navy (1786) picked up the theme of reincarnation. This presents itself as the personal reminiscences of the pig, as told to the author. He describes himself as a soul that has successively migrated from the body of Romulus into various humans and animals before becoming the Learned Pig. He recalls his previous incarnations. After Romulus he became Brutus, and then entered several human and animal bodies. Adapting the Shakespeare theme, the pamphlet states that he became a man called “Pimping Billy”, who worked as a horse-holder at a playhouse with Shakespeare and was the real author of his plays. He then became a famous British aristocrat and general — identified only by asterisks — before entering the body of a pig. [McMichael, George L.; Glenn, Edgar M. (1962), Shakespeare and His Rivals: A Casebook on the Authorship Controversy, Odyssey Press, p.56. via Wikipedia] 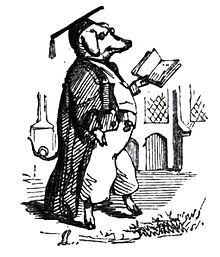 “Puns on the name “Bacon”, referring to the philosopher Francis Bacon, also appeared in the literature. In the poem ‘The Prophetic Pig,’ in The Whim of the Day (c.1794) a believer in reincarnation states, ‘I can easily trace…A metempsychosis in this pig’s face!…And in transmigration, if I’m not mistaken,/This learned pig must be, by consanguinity,/Descended from the great Lord Bacon. Thomas Hood’s poem The Lament of Toby, The Learned Pig also uses the Bacon pun, adding another on the poet James Hogg.  He describes the thoughts of a learned pig forced to retire from his intellectual pursuits to be fattened for slaughter.” [Learned Pig]

In The Times Literary Supplement, James Shapirio, author of Contested Will: Who Wrote Shakespeare?, declared the document [the lecture manuscripts] a forgery based on facts stated in the text about Shakespeare that were not discovered or publicised until decades after the purported date of composition. Peter Bower, an expert in paper history analysis, identified the paper as drawing paper, not writing paper, probably made shortly after the type was introduced in the mid-1790s. He noted that he knew of no instances of that type of paper being used to write out a long lecture. You can read the whole article HERE: Forgery on Forgery

Introducing Pride and Prejudice and a Shakespearean Scholar

Unless one knows the value of loyalty, he cannot appreciate the cost of betrayal.

What if Darcy and Elizabeth met weeks before the Meryton assembly? What if there is no barely “tolerable” remark to have Elizabeth rejecting Mr. Darcy’s affections, but rather a dip in a cold creek that sets her against him? What if Mr. Bennet is a renown Shakespearean scholar who encourages Darcy to act the role of Petruchio from Shakespeare’s “The Taming of the Shrew” to bring Elizabeth’s Katherina persona to the line.

ELIZABETH BENNET’s pride has her learning a difficult lesson: Loyalty is hard to find, and trust is easy to lose. Even after they share a passionate kiss outside the Meryton assembly hall and are forced to marry, Elizabeth cannot forget the indignity she experienced at the hands of Fitzwilliam Darcy. Although she despises his high-handedness, Elizabeth appreciates the protection he provides her in their marriage. But can she set her prejudice aside long enough to know a great love?

FITZWILLIAM DARCY places only two demands on his new wife: her loyalty and her trust, but when she invites his worst enemy to Darcy House, he has no choice but to turn her out. Trusting her had been his decision, but proving his choice the right one before she destroys two hearts meant to be together must be hers, and Darcy is not certain Elizabeth is up to the task.

Excerpt from Chapter Two, where Darcy learns the true identity of Mr. Bennet. You can see how the “history” becomes part of the story line.

“Darcy!” Bingley called from the third storey balustrade. “I did not hear your carriage.”

“Likely because it is some two miles removed with a lame horse being tended to by Mr. Farrin. Do you possess an animal that would serve until my horse can heal?”

Bingley spoke as he rushed down the stairs to greet Darcy properly. “I sent my large coach to London to fetch my sisters to Netherfield, but the smaller carriage and its team is available. I planned to dine out this evening—before Caroline and Louisa arrive,” he said conspiratorially, “but I can take my curricle, if necessary arrangements cannot be made otherwise. Longbourn is only a little more than three miles removed. Permit me to send to the stables, and you may explain to the head groomsman what you require.” He motioned to the footman to fetch the groomsman. “Come join me in my study. You must be starving. Mr. Byers, ask Cook to send up something for Mr. Darcy and prepare a room for him.”

“Yes, Mr. Bingley.” The butler rushed away to do Bingley’s bidding.

Bingley motioned for Darcy to follow him. “I did not expect you today. In truth, I was not certain how long you might be required in Kent.”

“I removed my sister from my aunt’s residence and returned her to Darcy House yesterday,” Darcy explained. “Lady Catherine will not have such easy access to Miss Darcy at my home.”

“Another of her ladyship’s demands that you marry Miss De Bourgh?” Bingley asked in what sounded of concern.

“My aunt is hard to dissuade,” Darcy admitted.

Bingley ventured, “Perhaps you should choose another to wife.”

Darcy prayed his friend was not suggesting his younger sister Caroline would make a good mistress for Darcy’s properties. If so, Bingley would be as disappointed as Lady Catherine. “While we traveled to London, Georgiana suggested something similar.”

Bingley, thankfully, changed the subject. “I despise that I was unaware of your distress today. It would be pleasant to be of service to you.”

“You are of service to me,” Darcy corrected. “You have rescued me from Lady Catherine’s manipulations.”

“Most assuredly, but I wish to be more. I mean to employ your knowledge of running an estate to determine whether this one would serve me well. Therefore, I will be further in your debt.”

Darcy chuckled as he sat before his friend’s desk. “We shan’t keep tallies, Bingley. That is not the way of friendship.”

“Nevertheless, I will be in the positive this evening for more than a daring rescue of your person from Lady Catherine’s demands.” Bingley reached for a sheet of foolscap. “Permit me to send a note around to Mr. Bennet that I will be bringing a guest with me this evening.”

“I would be perfectly content to remain at Netherfield. You do not need to alter your plans simply because I have appeared upon your doorstep,” Darcy assured his friend. “I do not expect you to cry off at such short notice nor should you inconvenience Mr. Bennet’s cook by adding another to her preparations.”

“Nonsense,” Bingley declared good-naturedly. “If worse comes to worse, we will split the portions between us. You know I could never abandon you to a house with which you are unfamiliar. The library here is sadly lacking. Moreover, Mr. Bennet of Longbourn is Mr. Thomas Bennet.”

“Thomas Bennet?” Darcy asked. “The Thomas Bennet? The man who is both a Shakespeare and a Bacon expert and who means to refute claims that Francis Bacon wrote Shakespeare’s plays and sonnets? The one our professors at Cambridge so often quoted?”

“The very man,” Bingley said with a wide smile. “Bacon made this part of Hertfordshire his home, thus Mr. Bennet’s interest in the man. Bennet and a group of scholars have been trying to refute Wilmot’s research claiming that Bacon is the true author of Shakespeare’s plays.”

“Ah, naturally. Who better to look for Bacon’s imprint upon the work of Stratford’s hero than England’s most renown expert on each?” Although he considered the true pleasure of taking Bennet’s acquaintance, Darcy wondered more upon the Shakespearean influence upon a certain young lady who had set his blood on fire when he touched her. “I happened to be in Suffolk when James Cowell lectured at the Ipswich Philosophic Society back in ’05. I was preparing for my final exams and thought to gain several insights to impress my professors. It was all quite fascinating.”

Bingley began to scratch out his message to Bennet. “What I find fascinating,” his friend said as he dipped his pen again into the ink well, “has nothing to do with Bennet’s treasured manuscripts. I am more concerned with the fact that the man possesses five daughters, equally renowned for their beauty and their amiability.”

NOW FOR THE GIVEAWAY! LEAVE A COMMENT BELOW TO BE PART OF THE GIVEAWAY, WHICH CLOSES AT MIDNIGHT EST ON FRIDAY, JANUARY 10. THE WINNER WILL RECEIVE AN eBOOK COPY OF PRIDE AND PREJUDICE AND A SHAKESPEAREAN SCHOLAR.

15 Responses to James Wilmot on “Who Wrote Shakespeare’s Plays?” + an eBook Giveaway