The Rice Portrait of Jane Austen? a Guest Post from Alexa Adams

This post originally appeared on Austen Authors on January 25, 2019. Enjoy! 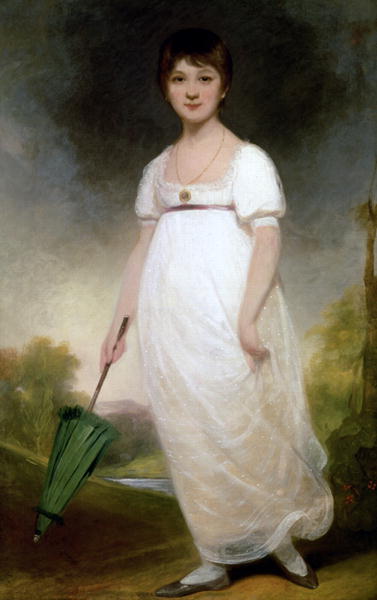 How clearly I recall writing this blog post in March of 2011. I was six months pregnant with my daughter and spent the bulk of the morning at a lab getting my second glucose test for gestational diabetes. I whiled away the hungry hours devouring the new evidence that Jane Odiwe, author, artist, and friend, had brought to my attention concerning the authenticity of the Rice portrait.

For decades, experts have debated whether the portrait is or is not of Jane Austen, the crux of the naysayers’ argument relying on both the date of the portrait and a lack of proof of provenance. Would Jane Austen have been young enough to be the sitter, and why, if it is Austen, is there no mention of the portrait by her descendants for almost 100 years after it was painted? Some of the biggest names in Austen scholarship stand on opposite sides of the fence on this issue, but I have always wanted so very much to believe it is a portrait of Jane. My complete bias now on the table, you can imagine my excitement (possibly aided by glucose overload – turns out I did have GD) that early spring morning in 2011, as I delightedly detailed the history of the controversy and presented the new evidence that the painter was Ozias Humphry and not Johan Zoffany, as previously believed. I was too busy with new parenthood to properly follow up a few years later when new, high image photographs revealed a date on the canvas of seventeen eighty something (Claudia Johnson had already said it was proof of authenticity in this article, so what more could I really add, anyway?). Happy to live in a world where I knew just what my favorite author looked like, I proceeded through the next several years content the matter was closed, even as the National Portrait Gallery continued to stubbornly refuse to authenticate the portrait. So it was with chagrin and abject disappointment that I read on another March morning in 2017 the Financial Times article that discredited the portrait. My emotions were something like Elizabeth Bennet’s in reaction to Mr. Darcy’s letter: at first I refused to believe it, but gradually the truth took hold. There was a stamp on the back of the Rice portrait that proved the canvass had to be made after 1800. I rushed over www.janeaustenriceportrait.com, where the Rice family keeps the world informed about their quest to authenticate the portrait, and saw their inability to reply to this blow with dismay. It was like a dear friend had died.

Since that day, I have come to accept that I love the portrait regardless of the sitter’s identity. It can still represent my idealized image of who Austen was, even if it isn’t actually her. Then yesterday I read this headline from The Guardian: Jane Austen? Family says note establishes disputed portrait’s identity. By the time I reached the end of the article, hope had blossomed anew.

Even without any relevance to the Rice portrait controversy, the discovery of a previously unknown note by Fanny Caroline Lefroy, Austen’s great-niece, would create buzz in the Janeite community, but the fact that this note explicitly establishes the provenance of the Rice Portrait makes it a bombshell. The handwriting matches Lefroy’s, of which there are many existent examples. It was somehow, seemingly miraculously, suddenly found in Austen’s writing desk.

Now, some of this feels just a bit too convenient. However was the note overlooked for so long? I’d like to see testing done on the paper to establish its age. There is a lot of information missing, but nevertheless, the claim is absolutely tantalizing. It certainly calls into question the dating of the stamp. Another explanation will need to be provided for its existence, but if it can be rationally accounted for, pressure for the National Gallery to finally recognize the portrait (and hopefully acquire it, saving it from its current fate in a storage locker) will certainly increase. What that would do to the value of the beloved but inadequate portrait by Cassandra Austen, currently the only verified portrait of her face, is an interesting question, as well as how that consideration might influence the NPG’s position.

Also worth noting is that the authentication of the Rice portrait may have implications for another, unverified portrait, the knowledge of which is confined to a photograph in a Christie’s catalog from an estate sale at Godmersham Park in 1983, its current whereabouts being unknown. You can read more about it in that original blog post from 2011, but the long and short of it is is that this could be a portrait of the Austen family. If so, Jane is the very young girl, positioned third from the left. Bears something of a resemblance to the girl in the Rice portrait, doesn’t she?

You can see a much better image of the restored Rice portrait at the family’s website: http://www.janeaustenriceportrait.com/latest-news/4581084461. It’s gorgeous!